Twelve months on from the founding conference, the Marxist Student Federation continues to go from strength to strength and continues to educate students in the ideas of Marxism. Last weekend our comrades from SOAS hosted the 2nd Marxist Student Federation conference, which was attended by over 80 representatives from Marxist societies around the country ranging from Newcastle to Bristol and Swansea to Cambridge attending the now annual event in London.

The crisis of capitalism has continued and students are at the forefront of austerity to try to end this. Students are facing vanishing contact hours, extortionate rent costs, ever rising gas and electricity bills and huge debt to pay for tuition fees all for very poor job prospects and poverty wages. With this to show for their debt, it is totally unsurprising that many students are coming to the conclusion that capitalism offers them no future and that education in the ideas of Marxism is the only answer to these attacks. It is therefore little surprise that the Marxist Student Federation continues to grow with ever increasing numbers of students attending their local Society to discuss the only alternative. 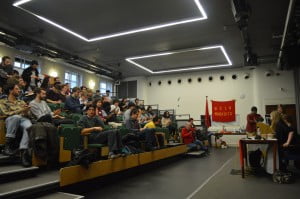 In a packed lecture room, the conference stated at 10:30 with the discussion of the world crisis and international struggle, introduced by Scott Shaw from Sheffield Marxists. He explained that this is the biggest crisis in the history of capitalism and that it is the greatest threat that it has ever faced internationally.

For this, we were joined by visiting comrades from different parts of the world, including Ricardo Che from Mexico, who talked to us about the situation in Mexico, where 43 trainee teachers were kidnapped by the police and given to the drug cartels. One of these trainees has since been found dead and the other 42 are still nowhere to be found. These trainees were part of the growing mass of radicalised students in Mexico fighting the privatization of Mexican state education. The student movement there together with the working class are fighting against the capitalist reforms of the western Imperialist backed Mexican president Enrique Pena Nieto. We were lucky to have Claudio Garcia from the Mexico Solidarity Campaign in attendance as well to tell all about how we can support the struggle here in Britain.

We also heard from Jaki, who spoke to us about the tensions in the USA after the murder of black teenager Michael Brown at the hands of a white policeman and the class anger that has erupted as a result of the support the white policeman has received from the authorities. 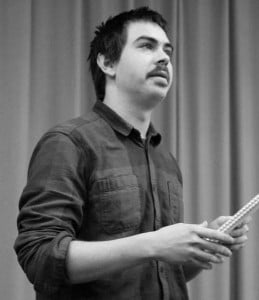 Fellow member Arturo, who is also a member of the Podemos circle in Oxford, explained the situation in Spain, where Pablo Iglesias’s party Podemos is predicted to be close to winning the general elections in November. Podemos is the result of the radicalised youth and workers, some of who were members of the Indignados and 15M movement, who are angry with the austerity measures of the present right wing Spanish government.

Nina from Greece gave us her report on Syriza,  the left wing party that has just won the elections in Greece, and Cecilia from Italy who talked to us about Sempre in Lotta and the recent mass movements in Italy.

Arsalan from the Pakistan Trade Union Defence Campaign raised awareness about the difficulties faced by Pakistanis trade unionists fighting the Taliban. The situations in Portugal and a number of other countries was also briefly discussed.

After some much-needed refreshments, we went on to look at the perspectives and policy of Marxists students in Britain. Ben Gliniecki, coordinator of the MSF, introduced the topic and focussed around the perspectives document of the Marxist Student Federation which looks at the worldwide crisis of capitalism and the role the Marxist Student Federation can play. It was questioned why Britain is the only European country experiencing economic growth and why this ‘growth’ is not improving the living standards for anyone other than the top 1%. The answer to this of course is that we live under a capitalist system that offers nothing for the other 99%.

After this there were a series of speakers from different organisations, such Roy Bentham of the Blacklist Support Group, who has been blacklisted for going on strike. This organisation is campaigning against companies and corporations that maintain blacklists, taking them to court in some cases. One of the key points discussed is that while any form of blacklisting is terrible for anyone, it is even worse when the reasons for the blacklisting are untrue. A short question and answer session was held following this which mainly revolved around the work the individual Marxist societies have done against the blacklisting scandal and how the Federation as a whole can act.

There was also a speech about the NUS and the need for revolutionary leadership by Ed Taylor, a Sheffield Hallam University student elected on an openly Marxist basis as an NUS delegate.

The independence anti-establishment movement in Scotland, class inequality, the constant attacks on the NHS, welfare, working conditions and living standards and the need for action from an organised working class and students movement were debated.

The last section of the conference was focused on learning from the growth and progress of the Marxist Societies in Britain this year. With the new groups in Kent, Swansea, and Durham as well as other places, there are now 25 societies. The reports from the areas gave very important guidance for newer societies and also gave many attendees the motivation to continue the work on their campuses in the knowledge of other societies across the country aiming towards the same goal.

In addition, different issues were voted on. Three amendments were proposed and passed by the congress, the first one being tabled by the Swansea Marxist Society regarding university funding by unethical corporations, including pharmaceutical and arms companies. As Marxists, we should oppose the association of universities with these multinationals, who seek to profit from these ties, and we should raise student awareness of this and demand information.

Kings College London Marxist Society proposed two amendments, the first one about the recent Scottish referendum. As Marxists we defend the people’s right to self-determination but oppose a hypothetical capitalist Scottish state because it would continue to exploit the working class. Their second amendment was about the recent Charlie Hebdo attacks and rise of Jihadism, which we oppose, but at the same time we oppose the right wing imperialism that created it in the first place.

Southampton Marxists proposed two amendments about the links between the students’ and workers’ movement which were passed by the conference.

In addition, guidelines for affiliation and a new elected executive committee were voted and passed with almost unanimous support.

The only part of the conference now left was of course the rendition of The Internationale which could be heard in several different languages from the international guests. This brought down the curtain on an important first year for the Marxist Student Federation in its first full year fighting to educate students in the ideas of Marxism and to link up with the wider workers movement to rid us of the rotten system of capitalism.

At the end of the conference, we all took advantage of the informal social to continue our discussion in a more relaxed setting.

In conclusion, the Congress was a complete success from which we can all learn and we are looking forward to continued growth and expansion during the present year. See you all again in a year’s time.

Workers of the world unite!