The pandemic started with universities lying to the faces of students, promising a “normal university experience” for all who attended. Students soon found themselves locked away within their dorms with inadequate university support and a lack of any in-person teaching. This malicious act was to milk students for money, many now locked in year long contracts with private landlords and saddled with thousands of pounds of debt.

Quickly infections began to soar just as SAGE had warned and universities were forced to lock already socially deprived students away to get it under control. Self-isolating students were reliant on food packages from universities, which in many cases arrived late and lacking in quality. Students with dietary requirements would often be given food they could not eat. Mental health sharply declined with students being left largely to their own devices with little university support.

This resulted in a large strike wave, forcing many universities to give rent rebates and other concessions. Many in private accommodation are still being made to pay full price however, as well as students who haven’t visited their accommodation in months. Most students still haven’t had any in person teaching and are socially isolated in their dorms.

UoN students participated in their own rent strike earlier this year, winning important concessions, however the university management has continued to fail students in many key ways. It is no wonder that with such callous treatment continuing, students would inevitably fight back once again. President of the Nottingham Marxist Society Brandon Britton spoke to Joel Butterworth (they/them), a lead organiser of the occupation who is running to be UoN’s community officer, to ask about the situation. 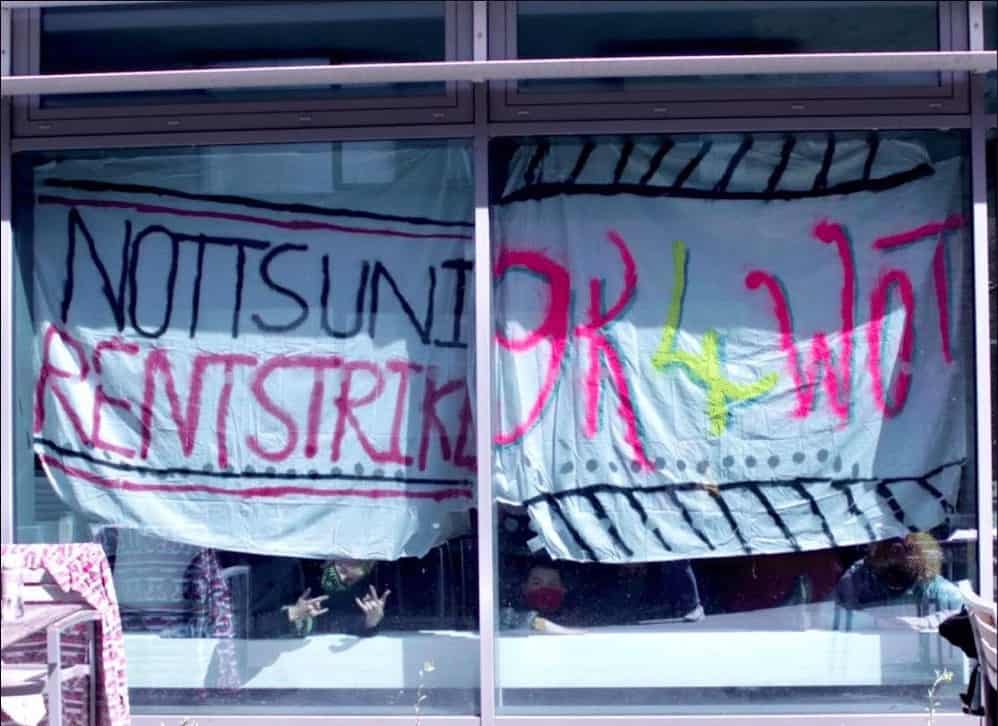 Joel went into detail about the hardships students have faced that have led up to this occupation. The university, after strongly encouraging students to move in, found itself with the highest rate of covid transmission in the UK and many were forced to self-isolate. The support from the University was completely inadequate, with Joel telling us that they “gave wrong food packaging to people with dietary needs, such as vegans, vegetarians and the religious”. Cleaners were told not to enter dorms to clean but there was no bin-bag collection service for self-isolating students, allowing rubbish to pile up.

The university also does little in the way of mental health. “There was no follow up from the uni asking if you were okay” for self-isolating students. Nor was there a safety net or grace period until recently, instead students were told to use the already existing extenuating circumstances (EC) form. This resulted in long waiting lists and no immediate help for troubled students, with Joel themselves only receiving a reply to their EC form two weeks after a deadline. This is despite students being expected to work as consistently as in pre-pandemic conditions. “They are throwing money at the problem but not solving it … there is no reform”.

The campus has also seen heavy securitisation, with many new guards being hired to patrol the university grounds and accommodation at night. “Some students feel unsafe around security guards”, which is no surprise as Joel went on to explain that the guards were hired externally and are anonymous, providing little accountability. There are also alleged stories of security guards not intervening when needed and facing no repercussions for doing so.

Joel made sure to stress that the teachers have been equally downtrodden during the pandemic and are not the cause of the problem. With the lack of a proper mental health system the burden has been pushed onto the staff, “Teachers are made to be part-time therapists … they try and support you, but their primary duty is to teach and this isn’t ideal”.  “Staff are put in precarious conditions … they are more stressed and have less time”. Staff have also faced increasing casualisation and outsourcing to third-party contractors. To thank the teachers for their hard work, the university recently attempted to cut their pensions! The occupation has gotten the full support of the staff-led UoN anti-casualisation group in a wonderful display of solarity.

The Failure of Marketisation

Joel told us that one of the main aims of the occupation was to force the university to put more pressure on third-party accommodation providers. Many students in private halls are still paying full rent, including students who haven’t visited their accommodation since before Christmas. Joel described how a shortage of uni-owned accommodation hurts students, “students are reliant on private halls which have raised rent prices, pushing poorer students out”. Joel boldly and correctly called them out as “parasitic companies trying to make as much profit as they can with no concern for students”.

This is not a problem with individual universities, but the inevitable result of a system that puts profit above all else and in which students are seen as nothing more than another source of revenue. Joel expertly explained this, stating that “marketisation means they do what they can to make a profit … the whole system is basically there to make money, because that’s the way it’s been set up … the way uni’s are structured they have to do things for profit, whether they want to or not”. Unfortunately, the invisible hand of the free market is doing little for the students of Nottingham, as “every single opportunity profit gets put before students, which is dangerous as it lowers teaching quality, mental health and education”.

The profit motive has no place in our schools or universities, staff and students deserve far better. Earlier this year UoN proved that militancy pays, winning rent rebates and other concessions, however the occupation is proof that there is still more to be won. The Marxist Student Federation stand fully behind the demands of UoN’s students, which are as follows:

While concessions can be won by individual universities, bringing an end to the marketisation of education will require the coordinated action of students and staff across the country. We call upon all students to join the fight against marketisation. For this to succeed, we need to be properly organised, from the bottom up. Practically this means collecting phone numbers and creating WhatsApp groups to organise students. Regular mass democratic meetings should be held, and accountable representatives elected, block-by-block, hall-by-hall. These groups should network together to coordinate rent strikes and other actions, as well as reaching out to university workers and the trade unions on campus.

With staff and students united and powerful, democratic organisations in place to support them, there is no limit to what we can win. We must boldly demand for free education and fight against the marketisation that is destroying our universities. Students and workers: unite and fight!