Revolution promises the possibility to achieve real change and a future that is shared and enjoyed by the many, whereas the politics of the establishment is only interested in maintaining the assets and position of the few.

Revolution is what Marxists are fighting for. And this is why, in September, the International Marxist Tendency (www.marxist.com) will be launching a new newspaper in Britain called Revolution, written by and for school students, university students and young workers.

Socialist revolution is about real democracy. Despite the illusion of democracy, under capitalism most of us soon discover that as individuals we are afforded little power and freedom by the 1% who really run this country. What is happening in the Labour party at the moment is an example on a small scale of the class war that is brewing in society as a whole between socialist democracy (Corbyn) and the interests of the big business establishment (Smith). The Revolution newspaper will provide readers with facts, figures and arguments exposing these realities of capitalism and making the case for fundamental change in society.

We are told that what we have today it is “just the way it is”; that it’s natural for us to have little to no say in the way our country is run; and that the interests of banks and big business should consistently take precedence over the desires and needs of the overwhelming majority. I – along with many others – reject this, as is being proved by the Corbyn campaign right now. The Revolution newspaper will not just be for information, it will be a tool for those of us ready to fight against the system to spread our ideas and build a revolutionary organisation.

It was my refusal to blindly accept the absolute authority and social domination of the rich and powerful that drove me towards revolutionary politics. I believe that collectively we have the ability to change the world if we work together, but so many of us are shown no alternative other to becoming another obedient cog in the destructive capitalist machine. This must change, and spreading Marxist ideas to as many schools, universities and workplaces as possible is the first step towards that revolutionary change.

Join the Marxist Student Federation and the International Marxist Tendency to get involved. And keep an eye out for the brand new newspaper in September. Revolution is coming. 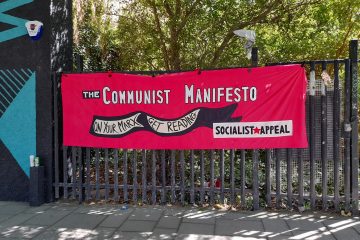