UoM students fight back! Statement from the Manchester Marxists

The University of Manchester bosses and landlords have proven to be nothing but selfish profiteering fat cats as students mobilise against the spontaneous raising of fences imprisoning Fallowfield Campus.

On the 5th of November, the university put up fences at Fallowfield Campus to enforce students to stay in their accommodation once their rent had been paid. This was achieved with absolutely no warning from the University of Manchester to the students, who woke to find themselves surrounded by fencing that imprisoned the whole campus. With an amazing show of solidarity, the students had spontaneously organised to protest outside their accommodation behind the fences – and were well accompanied by other UoM students from other accommodation, such as Weston Halls – by 8pm the mood of the students was concentrated in one place. 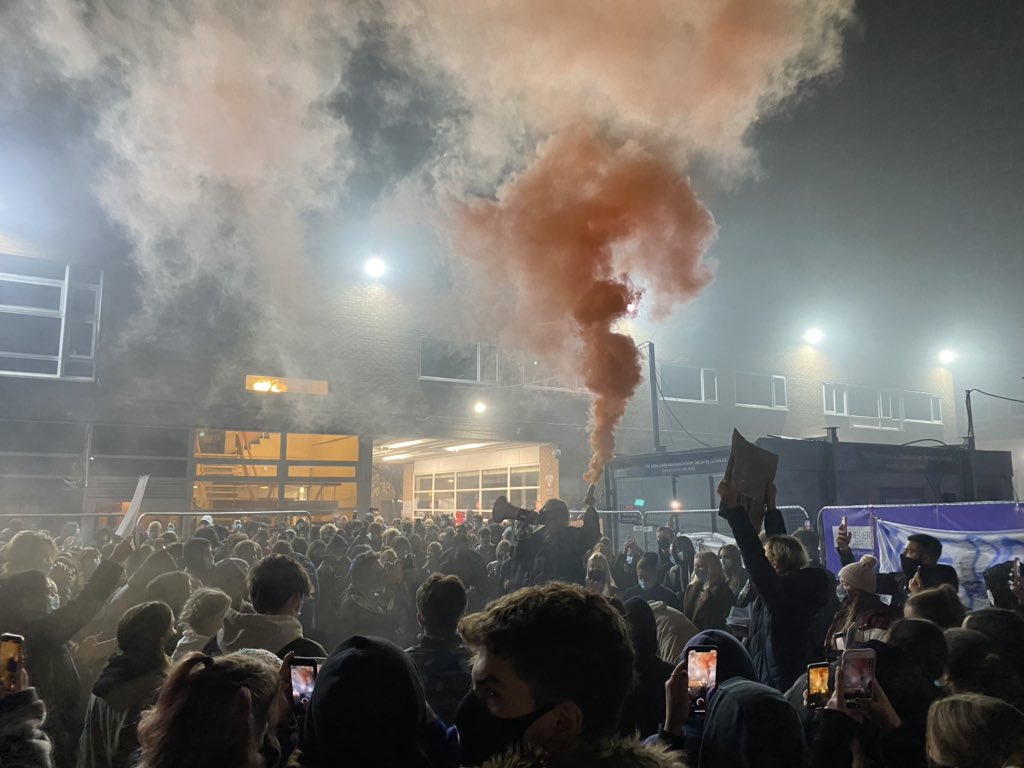 It was all the students themselves. When this protest began, there were many students being vocal about their anger at how they have been treated and blamed for the Covid crises when the government has been the force making the decisions to lift lockdown and allow the virus to spread. The ‘9k4what’ slogan was seen frequently. Equally, it is widely accepted the landlords and UoM bosses are seeking to profit off students whilst they are caged in what can be described as horrifically neglected accommodation. According to one UoM student ‘the moment the red flare was lit it all kicked off’ the whole fencing was taken down by the students and an estimated 400 students mobilised and moved around the Fallowfield area wearing Covid face masks.

Poignantly, a minute silence was held for the passing away of Finn Kitson, a student at UoM. His father tweeted following his son’s passing “If you lockdown young people because of Covid-19 with little support, then you should expect that they suffer severe anxiety. The student referred to below is our son – and we love and miss him so much.”

Many students have been feeling the brutality of such isolation, as a Rent Strike participant stated:

“I think mental health wise as well (if you go back to when majority of Fallowfield was isolating bc of positive tests) parents were calling the uni asking if everything was okay and their response was literally: we weren’t prepared for this… Like okay then why the f**k were we allowed back if you didn’t have suitable plans in place?”

The behaviour of the students at UoM to organise and mobilise the way they have is a sign of great will to fight against mistreatment. The loss of a student to the conditions they are still living in tells us it’s not a bunch of wild youths smashing obstacles for fun. This is a serious period for students living in Fallowfield with a serious growth in awareness of what kind of behaviour gets the attention of the ruling class. With the university failing to heed the constant complaints from students regarding floods, leaks in bedrooms and kitchens in multiple buildings, and then fencing them in to maintain rent payment and to restrict their movement, it’s right that such an explosion of outrage took place this evening. 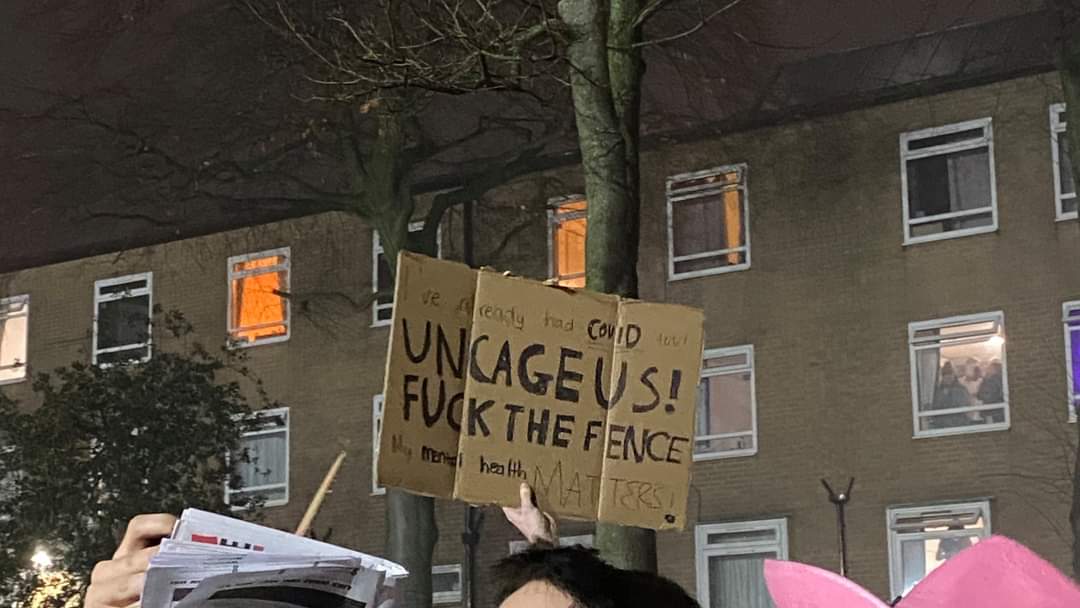 The Response from the UoM President, Dame Rothwell

The University of Manchester has now agreed to take down the fences on this Friday the 6th. However, an increase of security patrol will also be seen on campus as verified by the following apology from Statement and apology from the President and Vice-Chancellor, Professor Dame Nancy Rothwell:

“I sincerely apologise for the concern and distress caused by the erecting of a fence around our Fallowfield Halls of Residence today. This was not our intention – in fact quite the reverse.

“The fencing was intended as a response to a number of concerns received over recent weeks from staff and students on this site about safety and security; particularly about access by people who are not residents.

“There was never any intent to prevent students from entering or exiting the site.The fences are being taken down from Friday morning and students are being contacted immediately. Alternative security measures, including additional security patrols are being put in place. I apologise once again for the issues caused by this incident.”

A fellow comrade in Socialist Appeal, Paul Allen, had this to say in response to the words of the chancellor:

“Nothing more than vile and despicable words from a person not fit to control an educational facility, by locking in students as nothing more than common farmyard animals shows their lack of any true empathy and is clearly runs against the duty of care all in education should take on. This statement is nothing more than an attempt to “save face” and should be viewed for the heartless act it was on the president, chancellor and all those on the boards of directors for the university.”

Prior to these events there has already been some coordinated strike action at UoM to combat the universities negligence of student welfare, and the student unions impotency to act in the students interests. Such organisation of this recent explosive mood could prove to be a useful weapon to ensure students have their basic demands of decent living conditions met but only an active organisation with active leadership set on fighting till the end will be able to harness the students against the capitalists.

One UoM student also reported “I have no idea who organised it… I was mostly with the group at the front getting fences down… The protest was high energy and mostly crowd led. It definitely made a statement and did what it was intended for.” In addition, they stated “It was quite disorganised really… the leaders could have done more.” This reveals the sheer level of energy felt by students following the cruel measures of UoM, but also the demand and necessity for real bold leadership of the students which has already taken place.

Since being lulled back to campuses students are now being fenced in! 9k for online courses, a lack of mental health services and high rents is scandalous.

The Crucial Need for Marxist Leadership

As already aforementioned the rent strike participants have organised because of the absurd nature of the way students have been imprisoned into accommodation to so obviously line the pockets of the rich. As history has shown us time and time again, without a grassroots organisation dedicated to the fight against the capitalists any pulse of energy fails to form itself as a strategic manoeuvre towards desirable ends for a grassroots movement.

The Student Union have proven to be nothing but impotent to help the students, and so the students must build their own dedicated student organisation with regular meetings to reassess and plan for the unshakeable attacking of the interests of the likes of Dame Nancy Rothwell and the landlords, or else further measures will be taken to continue this exploitation further and no concessions will be won for the students at UoM.

Solidarity with the students of the University of Manchester and Rent Strike participants!