Recently the students of the University of Manchester have experienced a victory from their rent strike against the landlord of their halls and the university itself. The students were striking after being lulled into their accommodation and paying full fees even though their lessons were all on zoom meetings and weren’t getting the quality of education they paid for.

There was the infamous ‘HMP Fallowfield’ incident on 5 November, where students – without any warning – woke up to find fences imprisoning them inside the campus, with no way of getting in or out. On top of this, terrible maintenance of these dorms was (or wasn’t!) taking place. There were numerous floodings from leaked radiators and various malfunctions that had delayed responses from the University.

This provoked a backlash, and students came together to protest, not just once or twice, but enough that their organising culminated in an occupation of one of the university’s towers. The occupation lasted 20 days (from the 5th November to the 26th). From this they have gained a victory, getting a 30% reduction for this term and a 10 % reduction of the year.

Clearly, the Manchester students have shown the way forward. We need mass direct action to fight back against the profiteering landlords. The mood amongst students is there for things to go much further. Education should be free and accessible to all. And that means not only free education but free accommodation for students, with any necessary costs being covered by a maintenance grant. However, to capture the mood and keep up the momentum of this movement to fundamentally transform education at the University of Manchester and everywhere, our movement needs organisation..

The next step is for the leadership of the strike to organise democratic structures, through which participants in the strike can elect representatives and form committees to take decisions. In Manchester the decision to occupy was taken without consultation, as was the decision to accept the 30% reduction. Look at how much has been achieved through the actions of a small group. Think how much more could be achieved if the vast majority of students were involved in this way.

We should also not be naive about the behaviour and attitude of university management.  30% is a decent reduction, but it’s for one term only. Moreover, what’s to stop the university hiking the rent up again next year? Given the scale of the economic crisis which is looming, next year’s students will be facing even more insecurity than we are. We should fight to fundamentally change the university system – to make education free and accessible for all – not just for ourselves this year but for all students every year.

We can fight the university attempting to hike rents back up next year by establishing democratic student committees to coordinate rent strikes, which can be a permanent feature from year-to-year. Ultimately we should be fighting for these committees to have a say in the running of universities, including accommodation costs, alongside committees of staff and trade unions. It’s us who make up the university, not management. We should be the ones deciding how it’s run.

The hiking of rent prices in student accommodation is linked to the marketisation of higher education, which has been taking place for years. The government is cutting funding to higher education, which means they are being run more and more like private businesses. We need to argue for massive public investment in higher education. The Tories claim there’s no money but that’s not true. Britain’s billionaires have gotten RICHER during the pandemic. The wealth exists in this country to fund free education for all. The student movement needs to demand and organise for the expropriation of the rich and the biggest businesses to achieve this.

Linked to this is another way to strengthen a rent strike, which is through reaching out to the labour movement on campus, to gain support from the trade unions. On that basis, students and staff can form a united struggle against university management, and workers and young people against the Tories and the capitalist system.

Here are a few reports on what the Marxist Student Federation has been coordinating elsewhere:

In Birmingham we have been organising the Student Justice Now! Campaign, a student based group looking to build enough momentum for a rent strike. We started in mid October and have established a nucleus of students that will be able to act as the leadership for the growing movement. The events in Manchester had a palpable effect on the students here, meetings after the tearing down of the fence had a renewed level of energy, militancy, and a general desire to do something about the horrible treatment of students.

Over the December break we are going to consolidate our forces and produce a small pamphlet featuring reports from Birmingham freshers, lessons of past workers movements, and the need to unite with the labour movement to fight for socialism. We should hopefully be on a strong footing to play a larger role in events come the new year.

So far the rent strike in Cambridge has been mostly organising and getting enough support to actually make this a successful endeavour. Every college is getting its own smaller organising representatives who are tasked with getting the message around the college and drumming up support on a smaller level to ensure enough people are ready to strike in January. The online forms are being “filled in by hundreds and shared throughout the students with people understanding the aims and pledging to strike. There has been one session to call those who have signed up to have a conversion and ensure their support.

Goldsmiths students this year have endured terrible treatment from the Senior management and in response are organising a rent strike.

Demands include a 50% reduction in rent for this year, improved response to maintenance and response to endemic issues of racism and sexual assault on campus.

There are over 120 people so far who are interested in partaking and a small committee of students who are already organising the strike for the new year. Goldsmiths Marxists intend to be on the front line of this movement. We have already attended meetings discussing the strike and offered suggestions to fight the struggle as strongly as we can.

Comrades from the Newcastle Marxist society have been organising with 9K4what activists to plan and promote a rent strike. Together we have been visiting university owned accommodation and leafleting students to attend an upcoming meeting this weekend to discuss our demands we wish to push through. Previously organising any form of strike amongst the student base has been met with apathy and sometimes outright hostility in Newcastle. This seems to have changed this year, with many students showing interest when approached. We have had already 30 students sign our petition to participate in a rent strike before it has been made public! For comrades now our aim is to put forward radical demands in Sunday’s meeting and to make clear the wider political questions that need to be raised as to why students are now facing this turmoil. As it does not exist in isolation but as a product of the crisis of capitalism, which itself contains an inability to fight effectively against a viral pandemic. 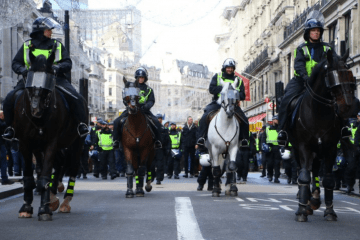 Capitalist states are thus arming themselves with greater coercive powers and undermining the right to organise in advance. Without a working-class fightback, any curtailment of democratic rights introduced with the excuse of the pandemic will be made permanent and used to stifle the ability of workers and youth, and their organisations to organise and fight. 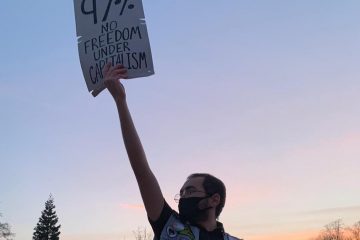 The murder of Sarah Everard has exposed the day-to-day dangers still facing women under capitalism. Across the country, people have begun to protest against this oppression, and the institutions that enforce it. Birmingham is no Read more…