The UCU strikes are kicking off today and the MSF has been building for the strikes amongst students across the country. Our Marxist Societies stand in solidarity with the UCU and are connecting both of our struggles, of students and staff, against the marketisation of education. We stand firmly for free education and democratic control over our universities by staff and students.

Our comrades have been doing excellent work in preparing for the strikes, and various Marxist societies have sent in reports on how they have been doing this work. This can be found below.

Students and workers, unite and fight!

Academic staff organised in the UCU are due to strike across the country for three days this month, on 24, 25, and 30 November. Earlier this term, meanwhile, university workers in 22 Unison branches took action over pay.

These strikes are taking place amidst a rising tide of industrial militancy and public sector walkouts, with nurses, civil servants, and teachers all mobilising as well.

It is vital that students join forces with workers in struggle, in order to offer solidarity and fight back against the bosses’ onslaught.

Capitalism is lurching from crisis to crisis. And it is workers and youth who are being made to pay, through austerity and attacks.

Higher education is facing particularly sharp cuts, with the burden falling on students and staff alike.

University vice-chancellors have already called for a rise in tuition fees, which will only increase the mountain of debt that faces students upon graduation.

But instead of improving campus life, the marketisation of education has resulted in worsening conditions for both students and workers.

Massive amounts of money are spent on vanity projects and marketing to attract investors and business sponsors. Meanwhile, essentials like affordable accommodation and mental health facilities are cut back.

Consequently, many universities have been forced to place students in halls miles away from campus. Students in Manchester have been sent as far away as Liverpool, for example; forced to commute between cities in order to attend lectures.

All the while, private accommodation companies and landlords are squeezing mega-profits out of freshers.

With all of this money sloshing around, students and staff are increasingly asking: where is it going? After all, it is clearly not going towards providing decent services, or raising lecturers’ pay.

Repeated strikes by UCU members demonstrate the prolonged attack on pay and conditions that academic staff have faced. Pathetic pay increases over the last 12 years have amounted to a real-term cut of 20%, once inflation has been accounted for.

At the same time, upper management have enjoyed healthy pay rises and bonuses.

Job losses are also an ever-looming threat, with universities closing down departments and courses that don’t bring in enough money.

Shockingly, some staff have even been forced into relying on foodbanks, as casualised contracts and poverty pay become the norm for those entering the sector.

On the other side, students see diminished module options and increased class sizes. Yet university bosses shamelessly try to drive a wedge between staff and students, pretending that striking workers – not marketisation and profiteering – are to blame for the deteriorating state of higher education.

In official statements from universities up and down the country, the same cynical tactic is being deployed. Management are trying to turn students’ rage towards staff, arguing that strikes are only adding to the disruption to learning, after the tumultuous years of the pandemic.

The anger of students is palpable. It is not strike action that should be blamed, however, but the actions of university bosses themselves.

In any case, this divide-and-rule strategy is clearly failing, with support and solidarity from students far outweighing any opposition when it comes to strikes on campuses.

Last year, for example, there was strong support amongst students for the UCU strikes. And Marxist societies played a prominent role in this movement: bolstering picket lines; organising student-staff solidarity campaigns; and mobilising mass demonstrations of student and trade union activists in cities like Leeds.

These examples must be replicated and built upon for the upcoming wave of action – not only to provide solidarity to university staff, but to NHS workers, teachers, and posties too.

The UCU strikes are not isolated. Workers everywhere are facing the same struggle.

Only through a united fight of students and workers can we fight back against the marketisation of education, and against the crisis-ridden, profit-driven capitalist system that lies behind this.

Such a movement must be linked to the fight for a clear socialist alternative.

We cannot trust the Tories or university bosses with our education. Instead, workers themselves should be in control of campuses and courses, free from the interests and influence of the profiteers.

At the same time, education and research needs to be fully-funded. But instead of relying on eye-watering fees and piles of debt, we must point to the hundreds of billions sitting in the bank accounts of big business and the billionaires.

This is why we argue for free education, funded by expropriation.

This can ultimately only be won and safeguarded as part of a wider socialist transformation of society. Only through uniting our struggles can we – students and workers – deal a decisive blow against the capitalist system that is responsible for destroying our universities, our education, and our lives.

How Marxists students support the strikes

In preparation for the UCU strikes, the Kent Marxist Society has been organising lecture shout-outs where student members speak up about how workers have been driven to strike as a last resort and the importance of supporting this decision.

The Kent MarxSoc will also host a solidarity event on Thursday evening (24th), where we will hear from UCU members about their perspectives on the strikes. We will put our case forward too; we believe that the fight against marketisation of education should be a united struggle between students and staff.

During this time it is easy for young people to be misled by words from the management of Universities, but we find that students are actually the most radical among the public.

For example, our comrades attended an online SU event to find out the outcome of where students stood on supporting the strikes – overwhelmingly students came out in support of this action. Unfortunately, the process of reaching this conclusion was disorganised, elongated, and unsurprisingly bureaucratic in that the Kent Union had to revote amongst them before even agreeing to ‘officially’ support the strike.

This is just another example of why a Marxist organization is needed inside and outside universities because even for the ‘highest student-led decision-making body within Kent Union’, students voices aren’t enough for the Union. Nor is simply voting to support the strikes near sufficient to win this fight. It is up to us as students to get organised behind revolutionary ideas and to connect our struggle to the wider labour movement as a whole – and ultimately against capitalism, which lies behind this crisis. 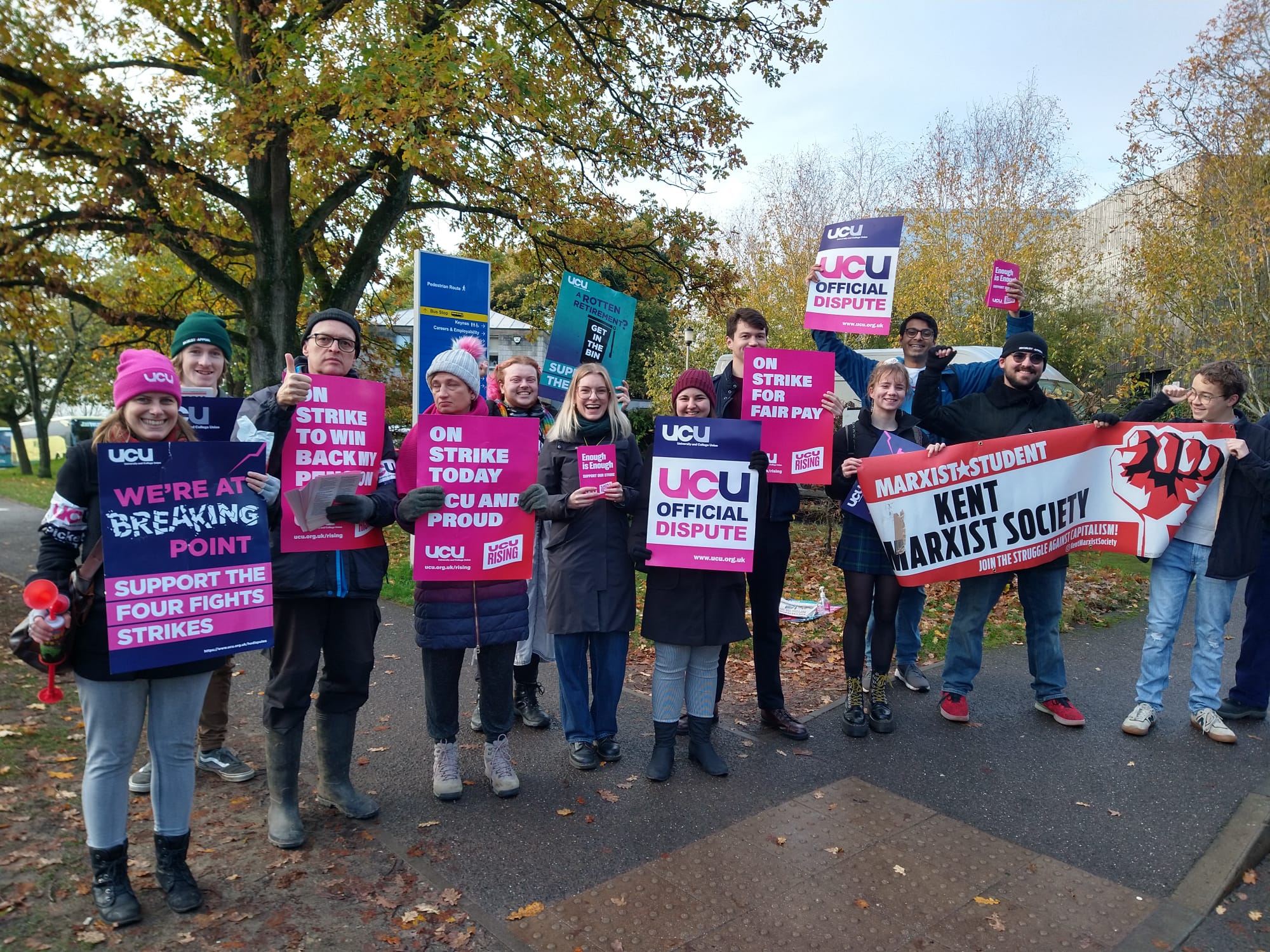 The Marxist Society at Birmingham Uni have been preparing for the UCU strikes as we believe building solidarity between students and staff could not be more important. The management has tried to divide students and staff by painting union members as selfish and disruptive, but students are seeing through this.

We used many different methods to mobilise the student body for the UCU strikes. We did lecture shoutouts and have invited the BUCU branch President to come and speak at one of our MarxSoc meetings about the four fights and the pensions dispute. We will attend the pickets and speak more about our ideas for free education and democratic control over our university. We will also be present at the regional rally on the 30th and bring more students along with us in solidarity with the UCU! 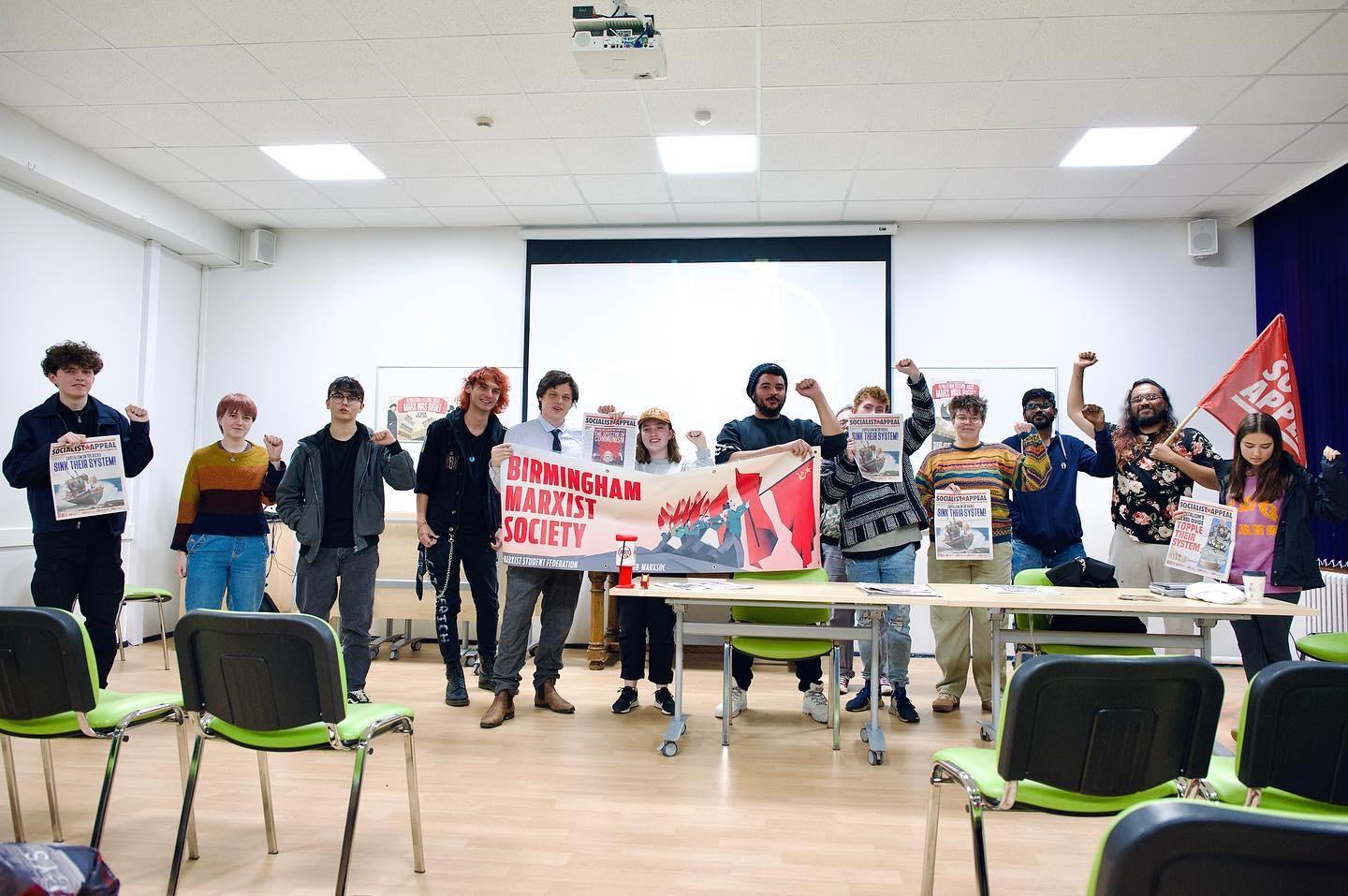 On Tuesday 15th November the York Marxists hosted an open meeting on the UCU strikes. We had 25 people attend, as well as having 2 guest speakers come from the University of York’s UCU branch. As well as our guest speakers we had a UCU Marxist and a Marxist Student Federation speaker on the panel.

We built for this meeting by postering and flyering in the previous weeks.

The discussion was vibrant and wide-ranging, with our UCU members explaining how the bosses at the university had attacked their pay, pensions, and working conditions; and ultimately how this worsens the learning conditions for students.

Our comrade from the UCU Marxists spoke about a winning strategy for the striking lecturers, advocating escalating to indefinite strike action. Our MSF comrade made the point that what we face now is the best that capitalism has to offer and that what is needed is democratic workers’ control of higher education.

Everyone who spoke called on students to unite with staff and join them on the picket lines as well as reaching out and broadening the movement to as many students as possible. At the end we all gathered to show our solidarity with staff holding up posters with the slogans:

Victory to the UCU!

Free Education For All!

Kick Capitalism Out Of Education! 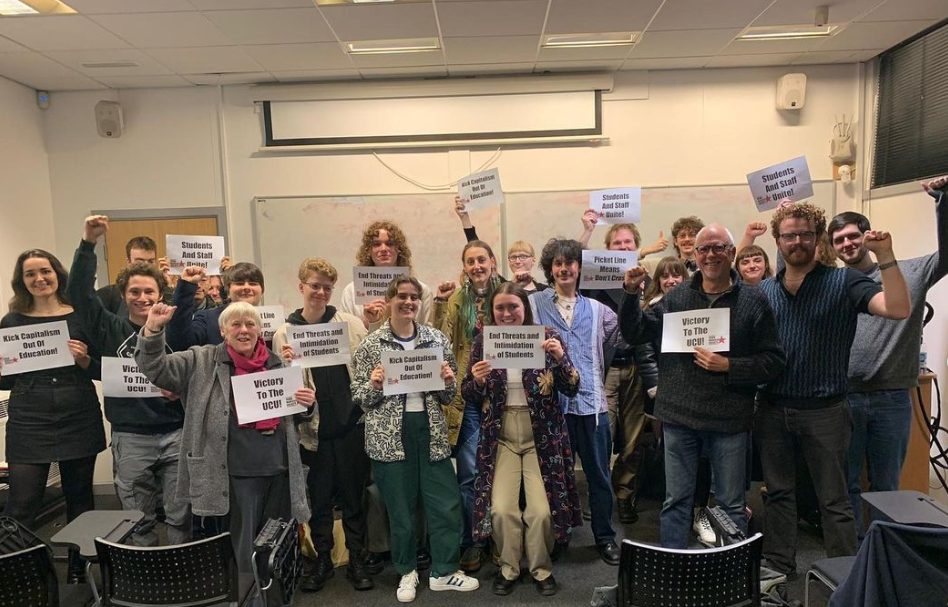 The Leeds Beckett Marxist Society have been busy preparing for the UCU strikes over the last two weeks.

We have put together an email template that students can send to the Vice Chancellor expressing their support for the strikes, as well as a leaflet explaining why students should support the strike and how they can do so.

We’ve also organised a placard-making session the day before the strikes to try and get as many students out onto the picket lines as possible.

The main way we’ve been engaging with students has been through ‘lecture shout outs’ – talking for a couple of minutes at the end of our lectures on why the strikes are happening, why students should support the workers on campus, and why they should get organised with the Marxist Society.

The response from students has been overwhelmingly positive. A lot of students are surprised and outraged at the conditions our staff face, and there was an understanding that a win for the workers is a win for students as well – their working conditions are our learning conditions.

We will continue to build and join our striking staff on the picket lines, to show our support, and to put forward a Marxist programme for fighting back against marketisation. 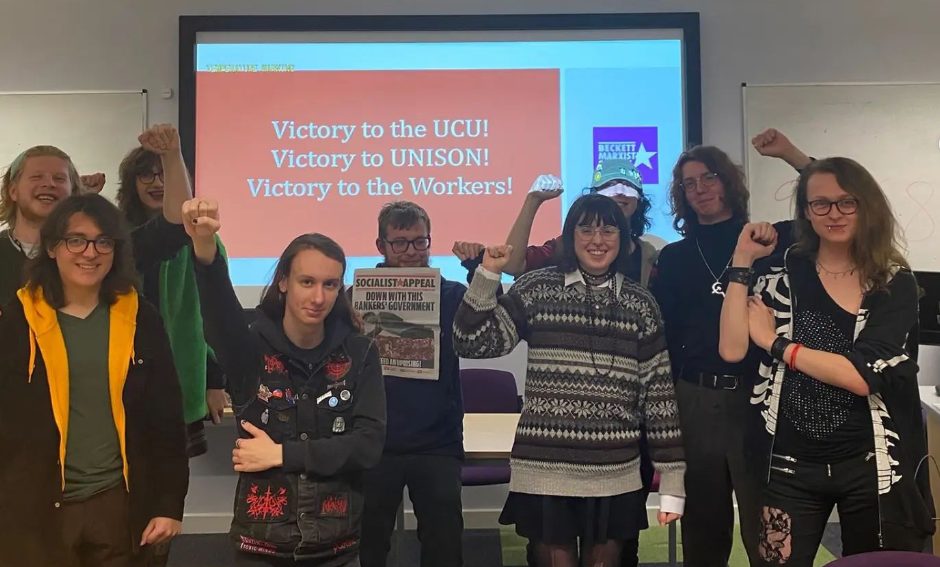