On 24 October Liverpool Marxist Society met and voted to endorse Gilly Singh as the Marxist Candidate for the upcoming elections for delegates to NUS national conference from The Guild of Students at University of Liverpool.

Below you will find a statement written by him on why he is running in this election. 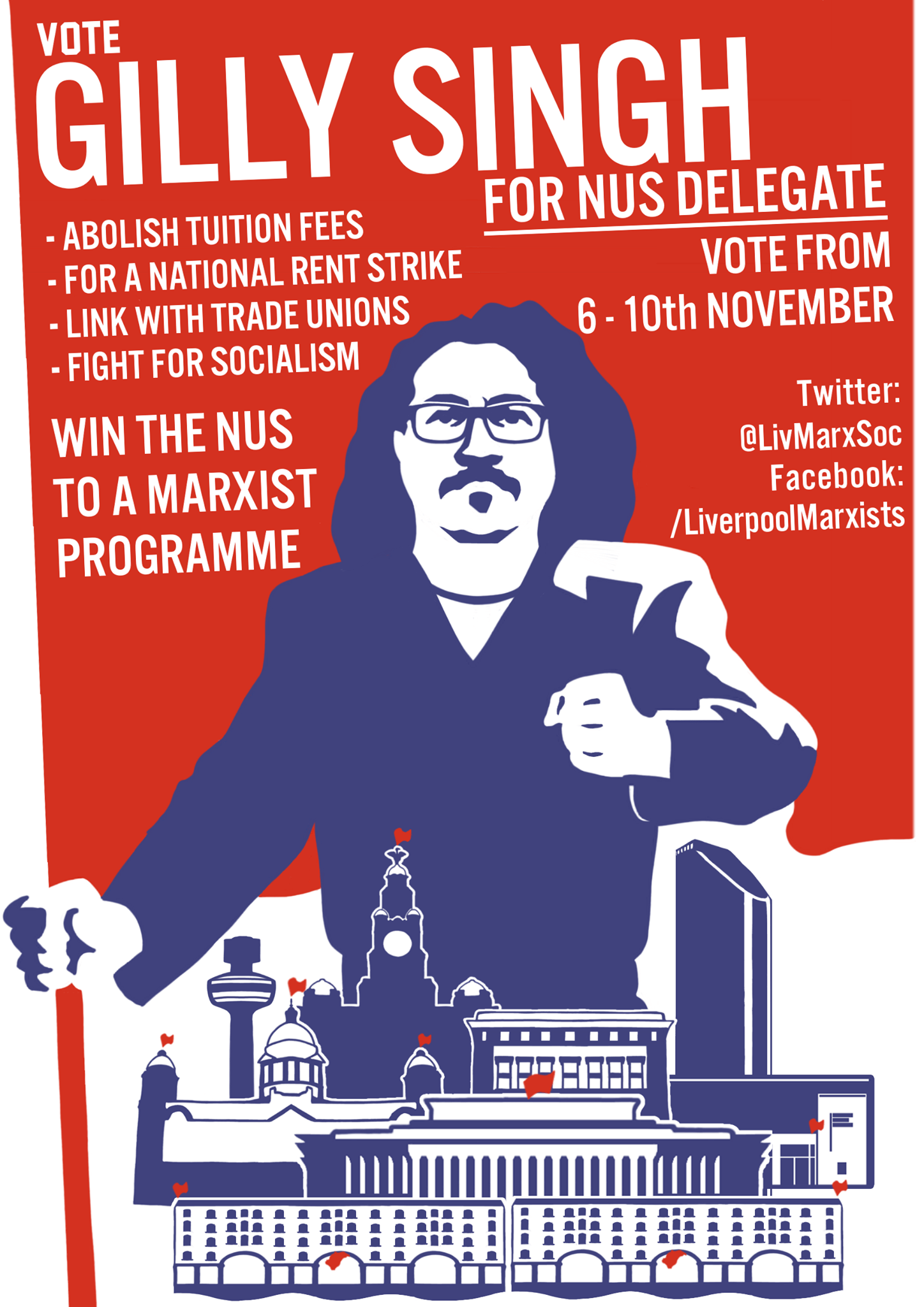 One of my flatmates recently got into a taxi, on their way to work, and noticed a university teaching staff lanyard hanging from the rear-view mirror. It struck me that with students struggling to make ends meet to pay for their accommodation and living expenses, and our teaching staff being forced into taking second, and even third jobs, in order just to survive, it is obscene to see a vice-chancellor pulling in twice the salary of the UK Prime Minister.

At the University of Liverpool, our vice-chancellor Professor Janet Beer, is raking in just over £340,000 a year. At the same time, we have seen increasing stress on teaching staff, impacting on the student experience and educational standards. Skyrocketing accommodation fees have meant that more and more of our student maintenance loans are being used just to keep a roof over our heads and many are made to work jobs to top up their meagre resources. This is all part and parcel of the modern student experience in which, after 3 years (or more) of higher education, we will be left with a jobs market unable to guarantee us anything more than a zero-hour minimum wage “career”.

These issues are not unique to the University of Liverpool but reflect wider trends across the whole of the UK education system. There is an ongoing trend towards privatisation and marketisation within education which must be fought tooth and nail by students and staff.

In a time of unprecedented wealth inequality in the UK, and around the world, young people are set to inherit a world of debt, low pay, poor housing, discrimination and environmental disaster. The system has failed and it is time to fight for a fundamental change in society.

It is for this reason that I am running as the Marxist candidate in our upcoming elections for delegates to NUS Conference.

The National Union of Students has the potential to mobilise millions of young people in the UK. Student politics has been the preserve of wannabe MPs practising the fine arts of hypocrisy, posturing and careerism, with a grossly overinflated sense of their own importance for too long. We shouldn’t tolerate this self-indulgence anymore. We need to fight to transform the NUS and win it to a revolutionary Marxist program so that it begins to fight for the needs of students, linking up these struggles with wider society.

We should fight for universities, colleges and schools to be democratically run by representatives of students, teachers and parents. They are better placed to determine the educational needs that exist in society rather than the current unelected managements. The profit motive should be removed entirely and a cradle-to-grave education system (such as the National Education Service put forward by Jeremy Corbyn) should be established. Students over the age of 16 should receive a full living grant to fund their education and there should be a cancellation of all student debt. We need to fight for the abolition of fees, a national rent strike for free accommodation and a ban on zero-hours contracts in higher education.

As a society, we have the resources to achieve all the demands we have set forth above. The banks, the biggest businesses, and the wealthiest individuals have enormous cash reserves and private ownership over the entire economy. We demand that the rich pay to give young people a future.

They should all be nationalised immediately and without one penny of compensation paid to the wealthy owners who have been getting rich by exploiting the rest of us for decades.

On that basis, not only could we fund free education, but we could rationally and democratically plan the economy, with the full participation and control of the working class.  That would be the only way of linking up the needs of society with the ability of the education system and the economy to satisfy them. This would be a system based on need, not profit. It would be a socialist system. And to achieve it we must overthrow capitalism which puts profit above all else.

Together with the organised working class, we can overthrow the capitalist order – run by the rich, for the rich – and transform society into one fit for humanity.

There can be no free education without socialism, and no socialism without revolution. Students and workers – unite and fight!

You can read a full copy of the Marxist Student Federation’s Manifesto for the Student Movement, the platform on which I am standing, here:

If you agree with these policies, join Liverpool Marxist Society in our campaign to win the NUS to a Revolutionary Marxist Program.

We will be beginning our campaign from Monday 30 October and continuing with leafletting, postering and holding stalls until the close of the polls. If you would like to get involved please contact us at liverpoolmarxists@gmail.com. You can also find us on Facebook (Liverpool Marxist Society) and Twitter (@LivMarxSoc).

The voting period opens on Monday 6 November and closes on Friday 10 November.