The strikers at the picket line at King’s College London are striking about far more than the measly 1.1% pay offer from UCEA and the government. A member of the History faculty holding up the UCU banner told me that she is not paid well, but for her the strike was about far more than that. Her motivation for participating in this strike is that she is sick of the commercialisation and corporatisation of the entire education system and public sector in general. 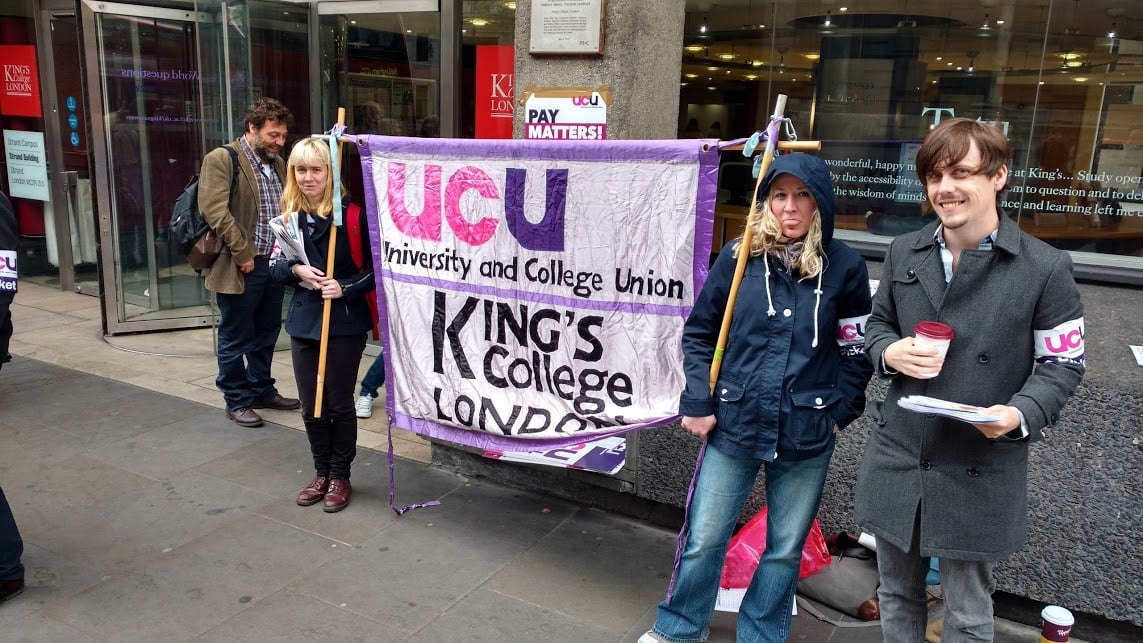 “Vice Presidents and Vice Chancellors do nothing! They have to answer to no one but are constantly examining staff for performance. It is like a dictatorship you would expect in Sports Direct or somewhere, and it’s extremely alienating. New staff just get 7 month contacts – the length of term time – so you can’t do research only teaching. There is a huge move to casualisation and super exploited staff, besides which the university will have a couple of academic ‘superstars’ absurdly overpaid.” It hasn’t escaped the notice of staff that LSE, just up the road from here, has just appointed Angelina jolie as a professor, a title she earns with only one lecture per year!

Joe Attard, from UCU branch executive and president of the Marxist society, explains the reasons for the strike and how academic staff, and the public sector in general, can win.

Following a successful picket, we headed over to the demonstration outside UCEA HQ in Tavistock Square. Here Joe Attard interviewed Malia Bouattia, the new left wing president of the National Union of Students, about the strike. She said that “in universities around the country management is trying to play students off against staff. They are saying it is ‘unreasonable’ to have a strike in the exam period. But the NUS’ objective is to foster solidarity between the students and staff, because our interests are interrelated. This is the long term strategy for the NUS because both students and staff are going to have to take action again and again to get the education system we want.”

After this demo about 150 packed into Conway Hall to hear several leading members of the UCU and other unions involved in education. Michael MacNeil, UCU national head of bargaining & negotiations, gave an angry speech relating the strike to the broader context of capitalism today, in which the share of wealth going to those who produce it – the working class – has shrunk and shrunk. He correctly said that everyone in the meeting must go back to their branches and build for more militant action to defeat the government. He emphasised the strike is part of building a political alternative to austerity – though he didn’t add what that is!

Joe Attard spoke from the floor, reporting on the huge success of the Fair Pay for GTAs campaign at King’s College. He then added that the political alternative to the waves of austerity and inequality can only be socialism, since capitalism is based on exploitation and will always require exploitation in education. Only under a socialist society can education be free permanently.

The meeting ending on a very militant note as Mark Campbell , a victimised trade unionist from London Metropolitan University, rightly said that the only way to win in this struggle is to throw down the gauntlet to the government. He said it will be a long and hard fight and we must prepare our members for that.

This is absolutely correct and exactly the kind of leadership the whole labour movement needs. Today’s strike was a very good starting point. But local trade unionists need to feel confident that their leadership is prepared to fight. We think it was a mistake to call the strike at a time when few students are coming in to university. The UCU needs to plan its action to have the maximum impact and must encourage its branches to wage a campaign amongst their students and their student union reps that they must show solidarity and strike with them. If we prepare for more action of that kind now, we can stop the government in its tracks.