TUC demo: now strike to bring down the government! 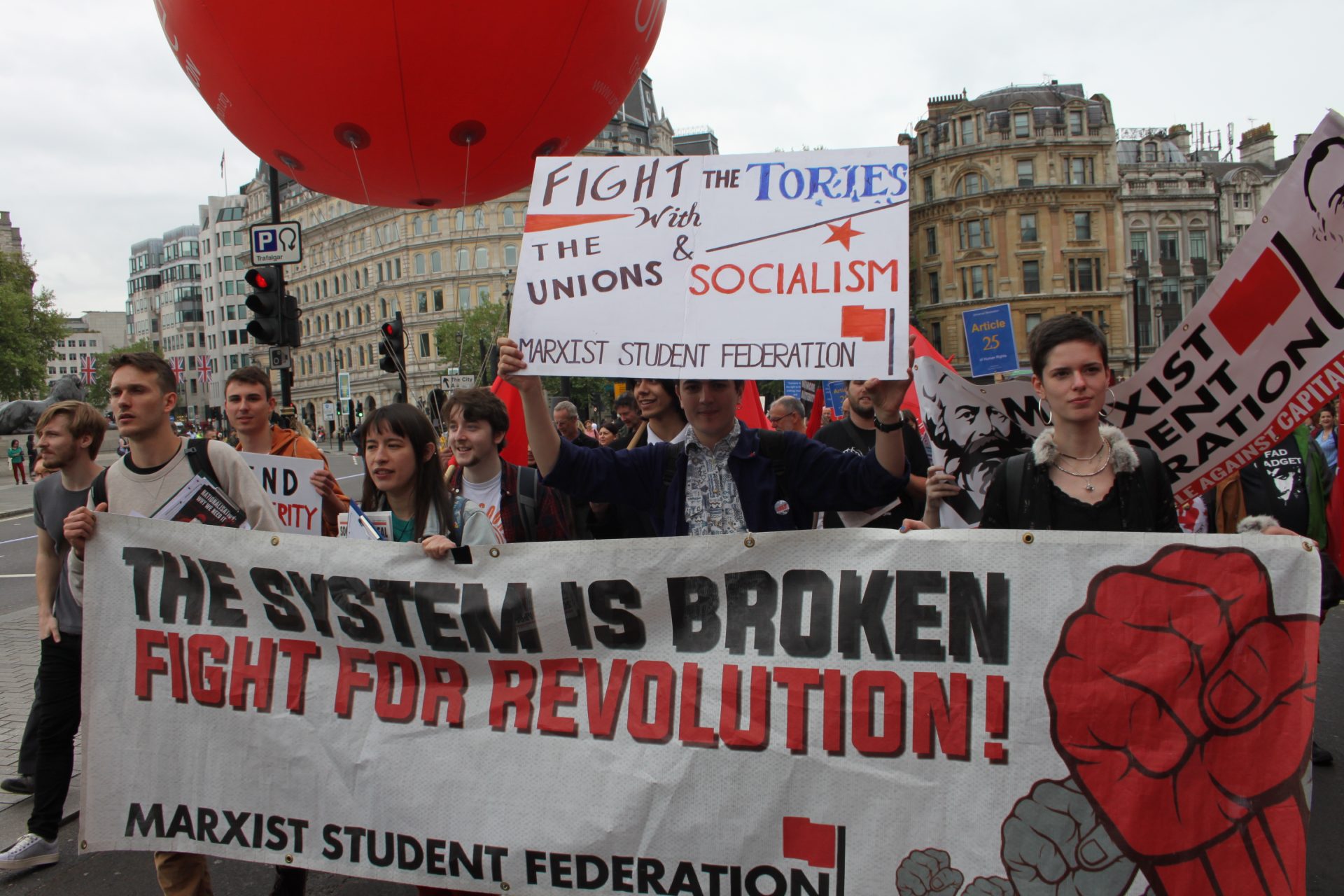 The TUC demonstration on Saturday 12 May was filled with an encouraging sense of optimism, although also with a feeling that this kind of brief demonstration is not quite enough on its own to solve the problems that working class people are currently facing.

The atmosphere of optimism that surrounded the demonstration meant that 30 or so comrades of the Marxist Student Federation gathered an excellent number of emails and telephone numbers of people interested in the Labour4Clause4 campaign that we are supporting. Fighting for nationalisation to put the economy under the democratic control of the working class is essential to improving the lives of ordinary people. Campaigning for the reinstatement of Clause 4 into the Labour Party constitution would put socialist economic policies at the heart of the party and it was great to see so many trade union activists sign up to the campaign on Saturday.

The demonstration itself was not a lively as some student protests that we’ve been on, but that being said, our small bloc of Marxists was very vocal in expressing what we want to see from the TUC; coordinated strike action, solidarity between young people and workers, an end to the Tory government, and ultimately the overthrow of the decaying capitalist class. We attracted plenty of attention and support with our chants, some favourites being: ‘Len McClusky on your bike, Britain needs a general strike!’ and ‘They’re weak! They’re wobbly! General strike: bring down the Tories’. So popular were our slogans that, by the time we were marching through Hyde Park at the end of the demonstration, we had more people chanting and marching with us than when we began.

The optimism on the demonstration shows what is possible, but the fact remains that the TUC’s tactic of a one-day weekend demonstration every once in a while has significant limitations. From the overwhelming carnival-esque nature of the demonstration to the ambiguous tag-line ‘A new deal for working people’, this demo didn’t feel like part of a serious strategy to bring down the government. Just who exactly are we supposed to strike this ‘new deal’ with? Our current bosses? The Tories? There’s simply no chance. The crisis of capitalism means that the ruling class and their political representatives have no choice but to further degrade our standards of living. This is simply inherent to the system, embedded in its logic, and so a ‘new deal’ within the limits of the current system is utopian. The reality is that the system must be overthrown.

For demonstrations like this to be truly effective they must be more than isolated occurrences. Instead of them being singular events, arranged on rainy Saturday afternoons, placed unobtrusively where the Tories can simply ignore them, they must become part of a broader strategy. The TUC must build its demos into a wider plan for mass industrial action, held alongside strikes in every sector of industry, all focused towards bringing down the government.

What the working class needs is a leadership that will demand, with no compromise, decent wages, democratic workplaces, and a nationalised economy. The TUC has the potential to rally a formidable force on the basis of these demands and truly provide a new, revolutionary, socialist deal for working people. It’s high time this potential was realised.