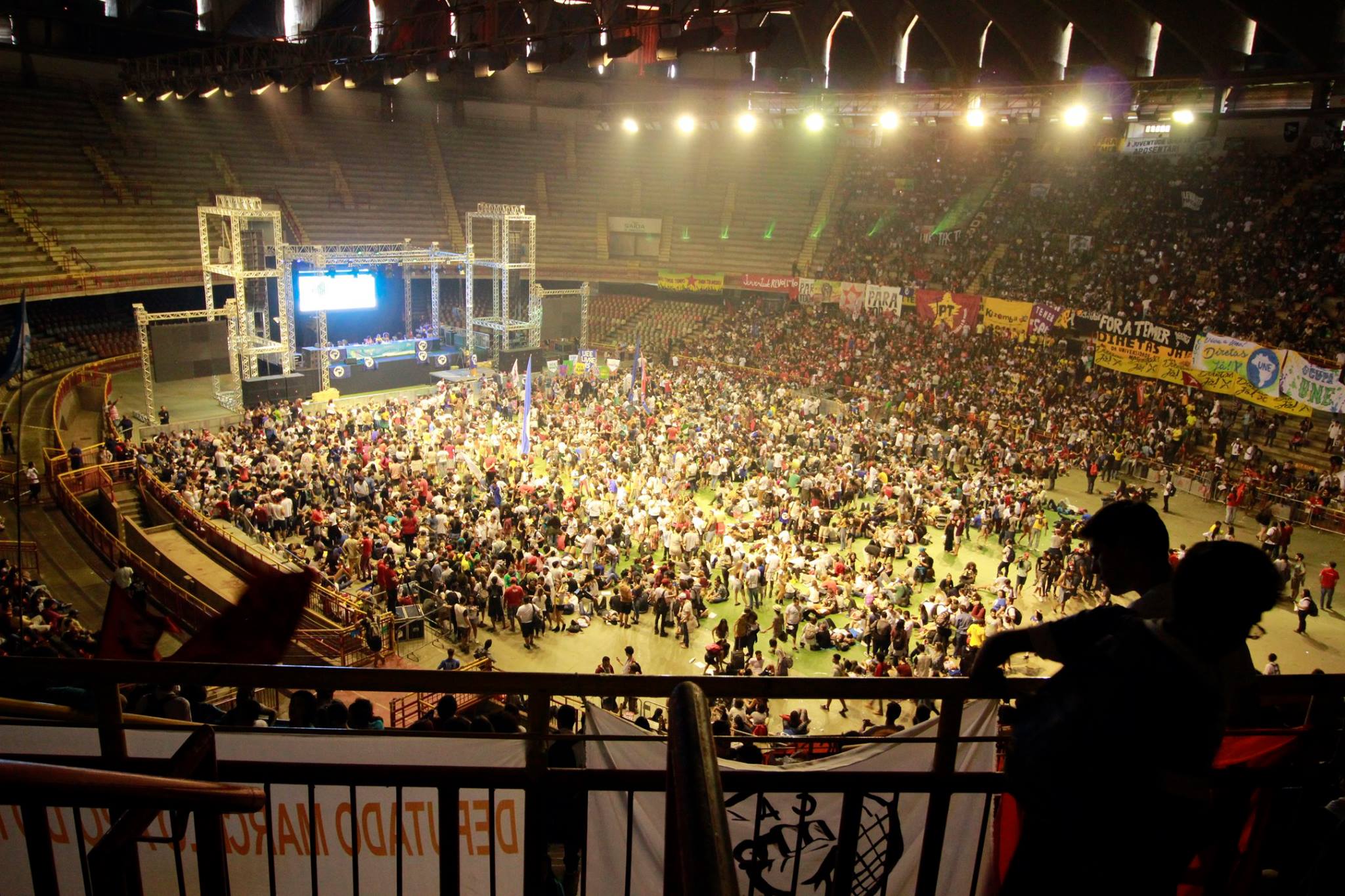 Between June 14 and 18, 2017, the 55th National Union of Students (UNE) Congress took place in Belo Horizonte. The event, held jointly at the Federal University of Minas Gerais (UFMG) and Ginásio Mineirinho, in the Pampulha region, was attended by more than fifteen thousand young people, with almost five thousand delegates. Liberdade e Luta’s delegation spoke to hundreds of students and discussed the importance of the UNE in fighting for ‘Public Education, Free and For All!’, ‘Down with Temer [the Brazilian president] and the National Congress!’ and ‘For a Workers’ Government’.

A Congress without political discussion

The UNE Congress really started on its third day, 16 June. Buses were still arriving at the UFMG on 15 June and organisations were pitching their tents and setting up stalls. More than 50 lectures and debates took place during the 15th and 16th, but the life of the Congress was in the tents of each of the groups present.
On Saturday and Sunday, at Mineirinho, there were no more debates. In theory, on Saturday, the political discussion should have been intense since it was the day for discussing the resolutions on the student movement and education. These resolutions serve as the UNE program for the next two years but the reality is that bureaucratic manoeuvres set the tone for what would be the final plenary.

For 20 years the UNE has been run by the Union of Socialist Youth (UJS), an organisation socialist in name only. This organisation is the youth of the Communist Party of Brazil (PCdoB), a party that has abandoned any traces of struggle for communism and surrendered to class collaboration, to alliances with bourgeois parties, and to state management in the service of big capital.
The UJS and its major allies organize pitched battles, in the form of political debates, into which they bring young people to defend their political positions as if they were their soccer teams – real debate is entirely absent. The reason is clear, as long as there is no political debate there is no risk of delegates changing their minds during the congress.

The delegates elected by the majority of the UNE and its opponents are young people who are now learning about the student movement, and know it only from the point of view of a single group. When they come across organisations that fight on a day-to-day basis, that have a programme and that organise themselves for the revolution, they begin to question those who took them to the Congress in the first place.

Unfortunately, the more “Left” organisations fall into this pantomime and also contribute to half of the event being marred by the sound of attacks and slogans that are often sectarian and end up offending anyone who is not in their own delegation. 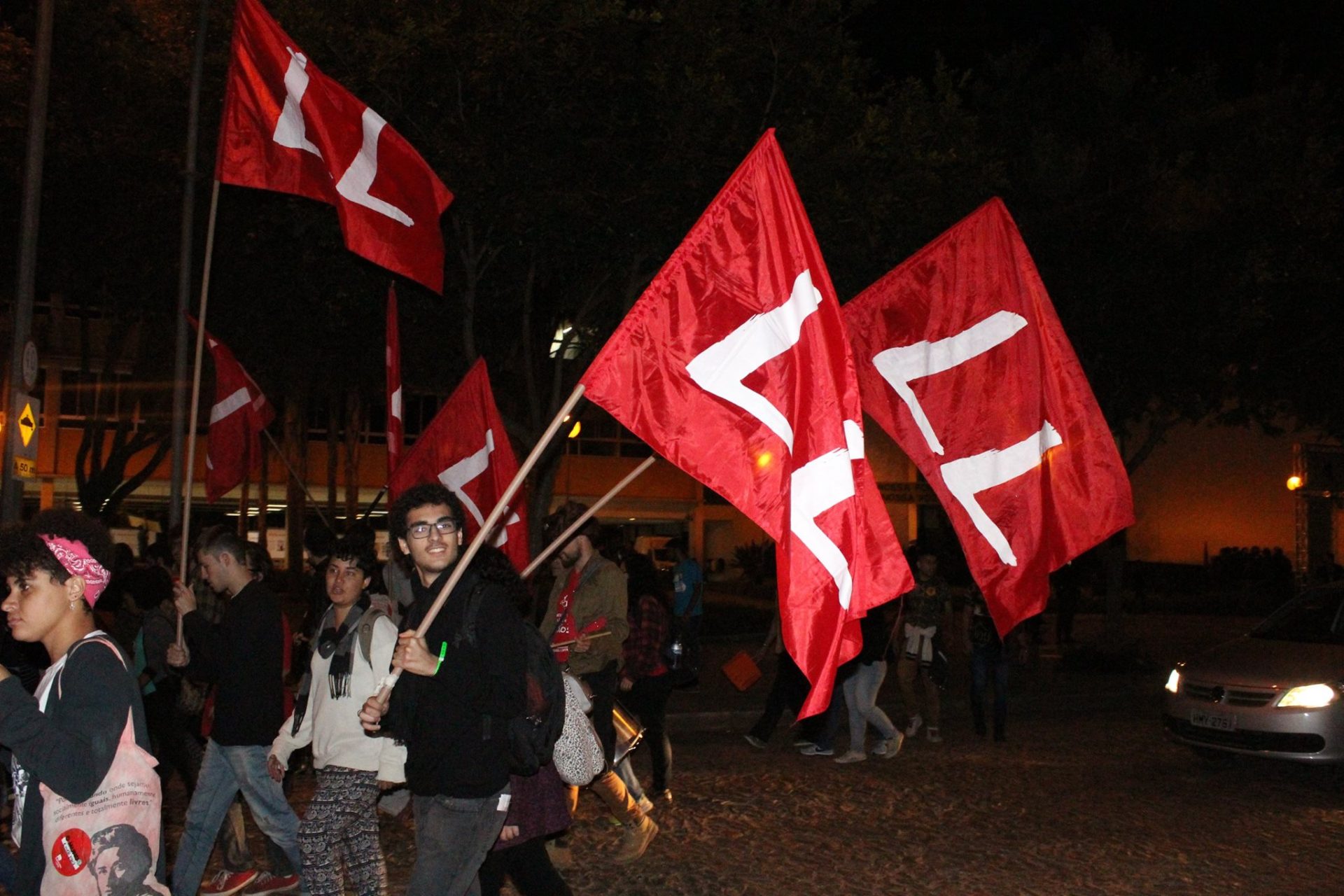 The bureaucracy in the leadership

Theft of ballots, ghost elections, document fraud, and so on, are all part of the “UJS methods” during the election process and at Congress itself. The Congress is designed so that the party with the most money can reach the largest number of students and elect its delegates. A season of “hunting for delegates” takes place before the Congress. The electoral regime is designed to keep small organisations out of the debate, meaning any problem can be solved with the final word of the UJS. They win the Congress before it even begins. This method has been used against almost all the forces that dispute the rigged process.

At Sumaré College, in São Paulo, for example, there was no electoral process and 18 delegates were simply appointed.

In the plenary on Sunday a letter appeared on the big screen entitled “Letter from Belo Horizonte”. It was read and was followed by a “symbolic” voting process (according to Carina Vitral, former president of UNE). This letter justified and called for the slogan ‘Direct Elections [to the National Congress] Now!’. Organisations that do not defend this slogan did not vote in favour of the letter, but the approval was announced as being unanimous. This might have been due to a problem with Carina’s eyesight, it is not known, but at least 300 delegates were from organisations opposed to direct elections. Similar situations occurred throughout the event. 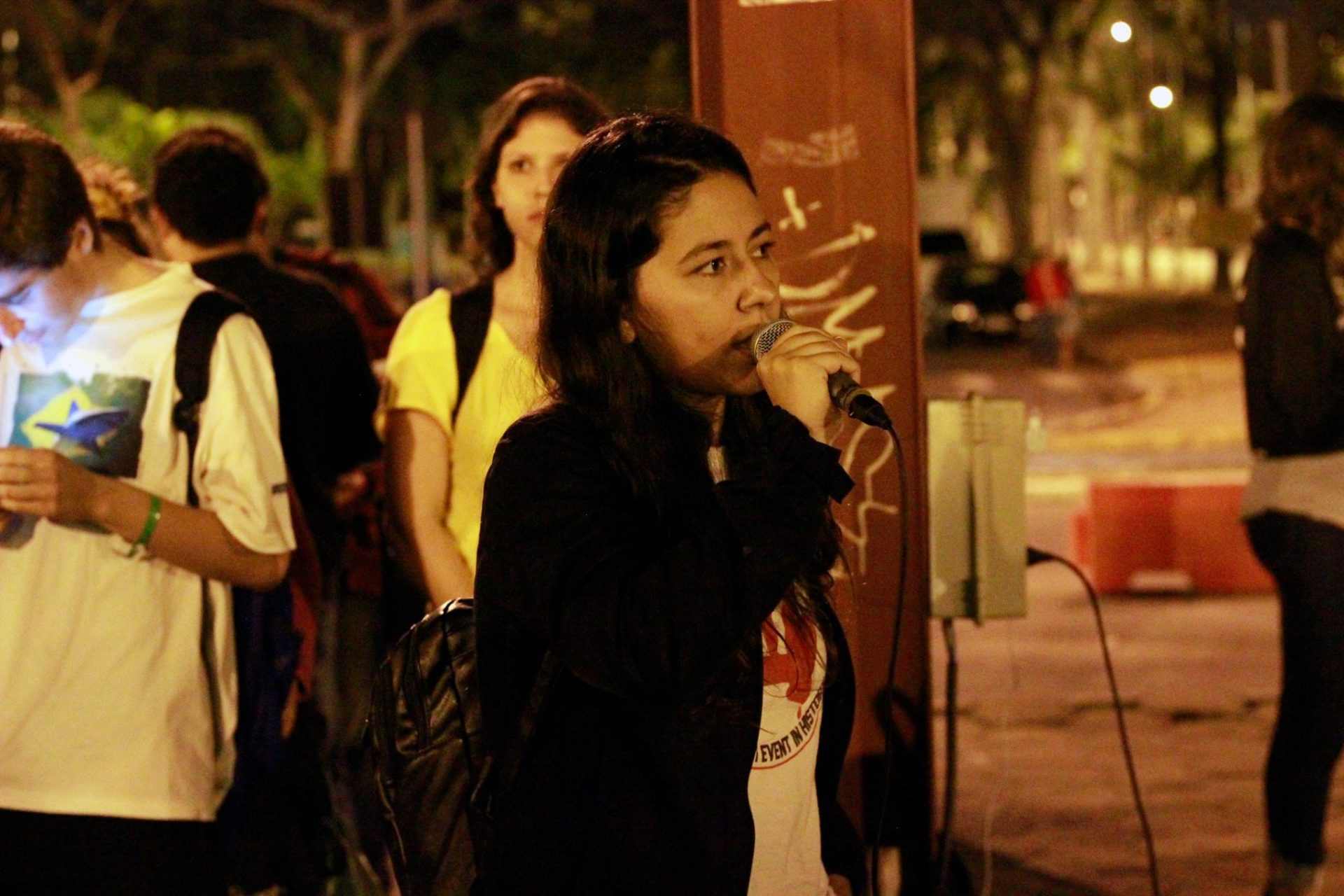 Created in 2009 to combat UNE majority, unifying several organizations, the Left Opposition (OE) has been growing over the years. At the 54th Congress, the first after the days of protest in June 2013, the OE appeared as a possible point of reference for the youth that had been awakened to the class struggle. However, in 2017, the Opposition was slightly reduced in size and changed the policies it advocated.

Historically, the OE has acted as a coalition slate within the Congress. There were several attempts at building formal unity of all the participant organisations between one congress and another, or meetings to organise a unified struggle of all the organisations at the grassroots level, instead of just presenting a slate at the Congress. What prevented something like this from happening, and this still holds true today, has always been the programmatic differences between the organisations that make up the Opposition. What unites the Opposition is the fight against UJS, only that and nothing else. Some organisations do have programmatic similarities, but the differences between them overall are still great.

It is not only the absence of real unity that explains the stagnation of the OE in this Congress. The whole process of the election of delegates was marked by the “UJS methods” (fraud, bureaucratisation of the electoral process, etc.) on the part of most OE organizations. And when it came to political ideas it was no different. Much of the Opposition was unable to differentiate itself from the UNE majority when it presented its proposals. Like UJS students, OE students will find that they have participated in a similar electoral process, and when they come across the slogans of the OE leadership, they will realize that they are also ‘Down with Temer’, ‘Against the Reforms’ and ‘Direct Elections Now!’

The struggle against Temer and against his (counter)reforms is progressive. But they are only on the agenda of the UJS and its allies because they lost government funding after Dilma’s impeachment. Already their slogan of direct elections to the national congress represents a step backwards. We are in a situation where the institutions that support the bourgeois regime are completely demoralised, they have lost their legitimacy. Demanding ‘Direct Elections Now!’ or ‘General Elections’ is to fight to restore these rotting institutions, when in fact we should be sweeping them away.

There is another issue perceived by students and workers, which explains why this slogan does not mobilise the masses. The elections would most likely result in the election of Lula, who is placed first in the polls, or even of a right-wing candidate. People know that neither Lula, nor Marina Silva, nor Alckmin or Doria, will solve their problems or stop the attacks of the bourgeoisie. After all, the pension and labour reforms of the Temer government are very similar to those that the Dilma government wanted to carry out, with the support of Lula and the PT [Workers’ Party] leadership.

The path that some OE forces are taking is dangerous. At the 54th Congress there was a so-called “People’s Field”, headed by the Popular Youth Levant, which disappeared at the 55th Congress, but which voted for all the resolutions of the UJS. With the pressures generated by the current political situation, more organisations are starting to follow the same course of capitulation to the UJS. 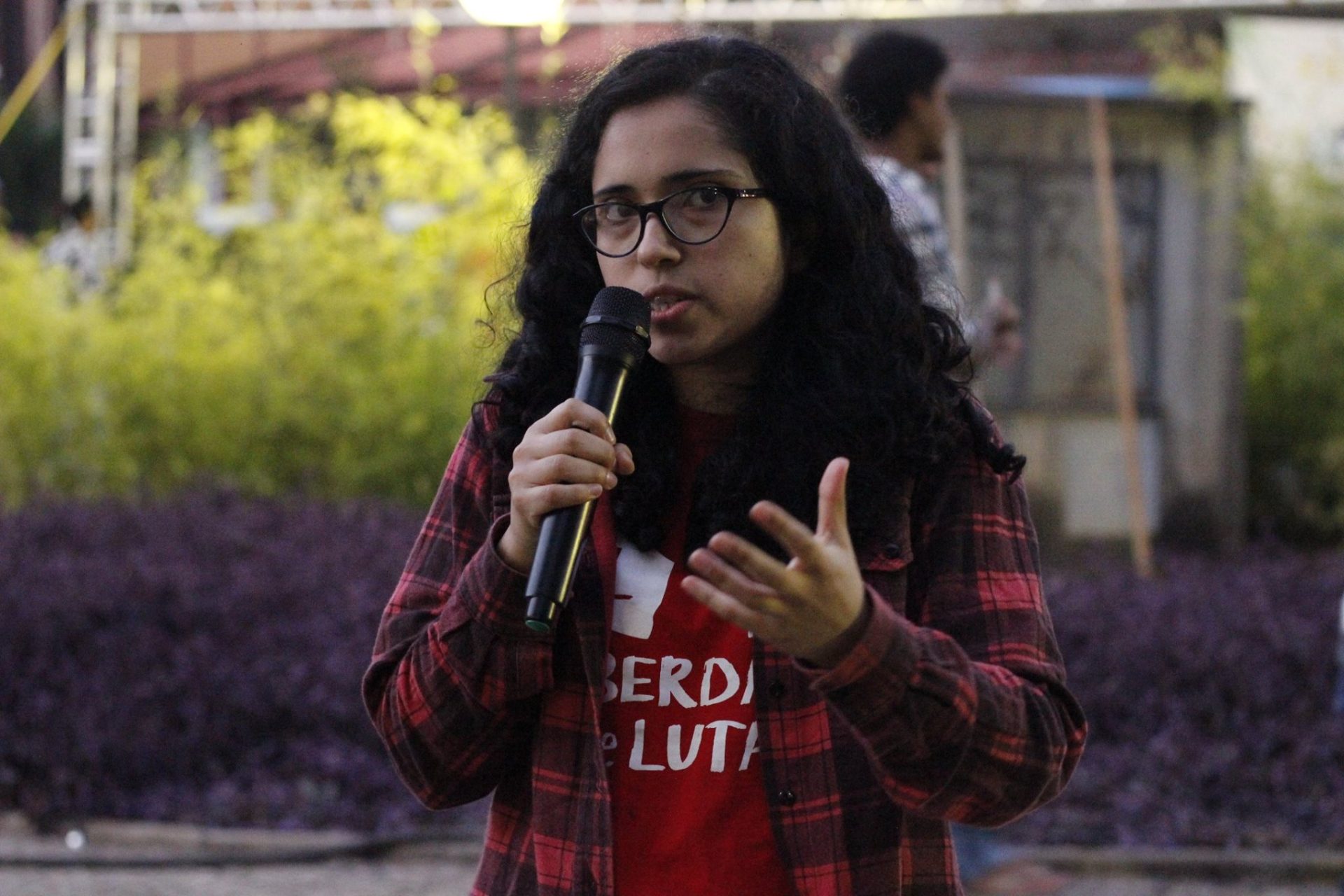 The role of Liberdade e Luta

One particular stall with books, stickers and brochures, surrounded by a few dozen young people who engaged in discussions and offered pamphlets to people, attracted the attention of many who attended the Congress. It was Liberdade e Luta presenting their ideas and materials, and inviting each student to fight not only against this government but also for revolution.

The Congress consisted of long days, starting early and ending late. The bus left the accommodation to the sound of traditional songs transformed into slogans. As soon as the stall was set up, groups of two or three comrades set out to talk and get in touch with those who were attending the Congress. Without fear of debate and of convincing those who are not already won over to their program, the Liberdade e Luta militants opened up contact with hundreds of students during the event, showing another type of student movement.

Liberdade e Luta had its first anniversary in January and is still a growing organization. If its comrades were not intimidated by the larger organisations, which already have a national profile, it was because of the strength of the ideas that each was arguing for. Many Congress attendees spoke of overthrowing the government, of access to education, and of innumerable other demands, but few defended the only things that can guarantee that these claims will become reality: the resumption of UNE’s 1979 Charter of Principles, a revolution, and the construction of a socialist society.

Today the UNE has become a bureaucratised entity at the service of capital. Despite the sometimes radical discourse, this entity today does not really represent students. It is necessary to build Liberdade e Luta in every school, in every university and factory of the country so that in the future, the national student body will not be an obstacle, but an instrument of our struggle to transform society. 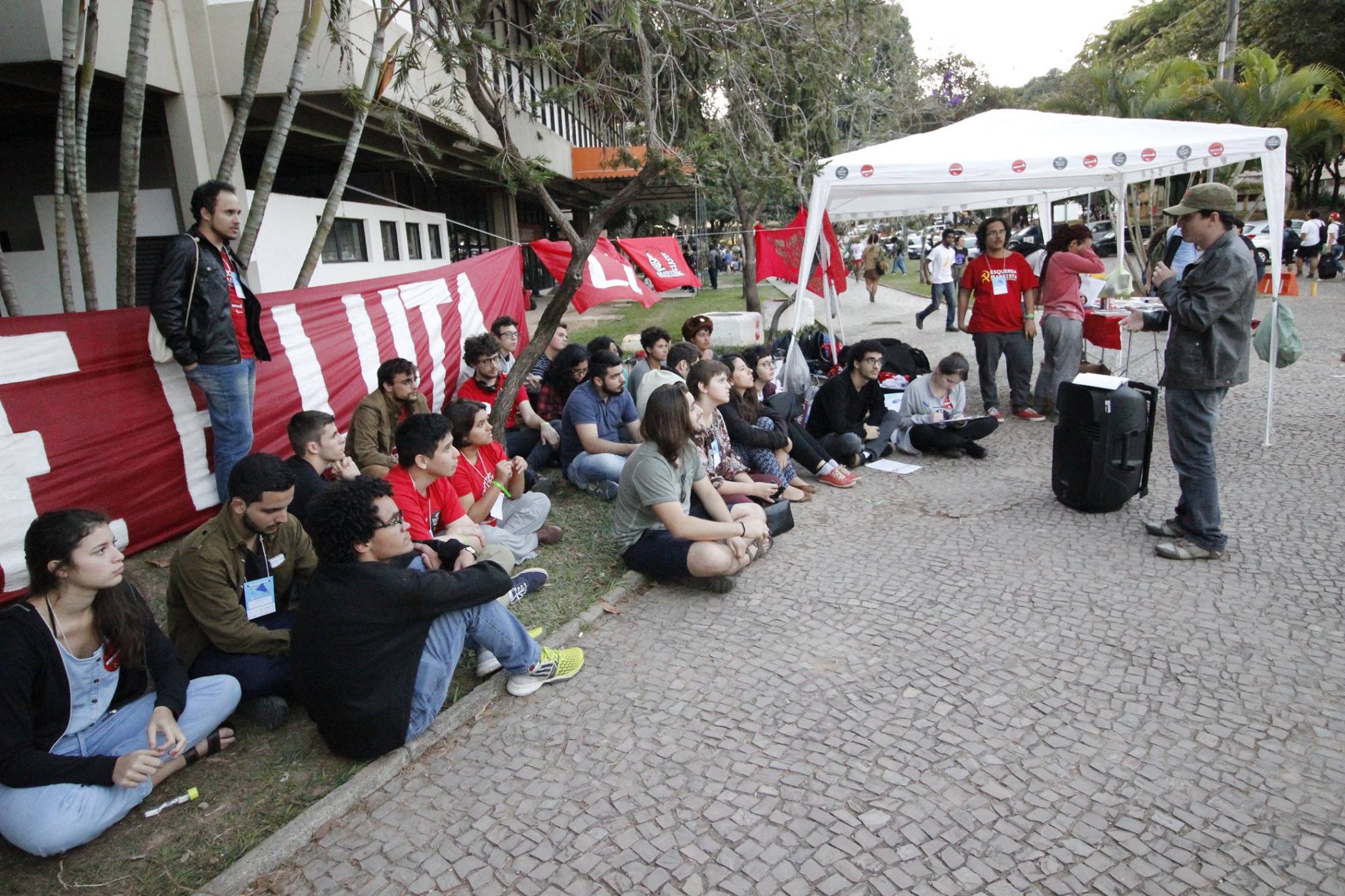