The Russian Revolution – Triumph or Tragedy? 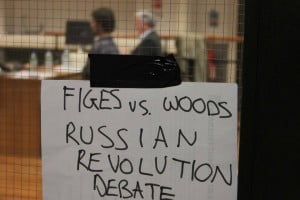 On Thursday 10th October the Marxist Student Federation hosted a fiery debate between Alan Woods, editor of www.marxist.com, and Orlando Figes, Professor of History at Birkbeck, University of London on the topic of ‘The Russian Revolution: Triumph or Tragedy? 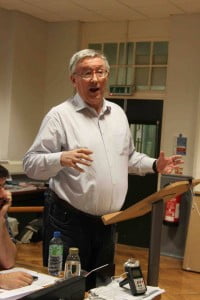 Addressing a packed hall of 180 people, Woods opened the debate by pointing out that the Revolution was a mass popular movement of millions of workers and peasants coming onto the stage of history, to take their destinies into their own hands. Citing eyewitness accounts, and even Figes’ own book, Woods showed how the Bolsheviks, by October 1917, were the only party who worked among and were trusted by the masses, and how their struggle for ‘Peace, Bread and Land’ and ‘All Power to the Soviets’ were the slogans that won people to their banner.

With this evidence Woods was able to demolish the argument that the Revolution was in fact nothing more than a coup. How, Woods asked, is it possible for a tiny group of conspirators to place themselves at the head of millions of people, topple a brutal regime, and then retain power for years through a bloody civil war without the support of the mass of workers and peasants? If the Bolsheviks seized power using trickery, deception and backroom methods they would never have come close to beginning the tasks of establishing a socialist society, let alone being able to carry out these tasks for years afterwards.

Woods pointed out that understanding the Revolution as a mass movement in support of the Bolsheviks is the only way in which the bloodlessness of the October insurrection can be explained. More people were killed during the making of Eisenstein’s film about the insurrection than were killed in the event itself. This is because the regime simply had no one left to defend it. The Bolsheviks won such overwhelming support to their banner that the mass of people swept them to power in a near-peaceful insurrection.

Addressing the violence of the civil war that followed the insurrection, Woods pointed out that 21 foreign armies of intervention invaded Russia to attempt an overthrow of the Bolsheviks as soon as they had taken power. The was a mobilisation of the most reactionary elements of society – the landlords and the old ruling class whose interests, power and wealth were threatened by the socialist transformation of society. These were the attacks that the Bolsheviks faced immediately following the insurrection and their choice was one of defending themselves against the attackers, or allowing themselves and the gains of the revolution to be drowned in blood. The civil war was a war of self-defence on the part of the Bolsheviks. 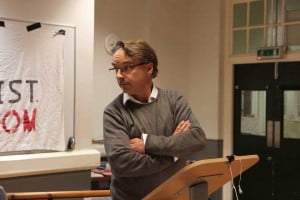 Figes began his reply by describing Woods as “brainwashed” and later suggested that Woods’ argument was the product of ignorance as opposed to Figes’ own academic studies. These personal attacks reflected the main thrust of Figes’ argument – that the Bolshevik Party was able to seize and maintain power due to the ignorance and passivity of the Bolshevik Central Committee and the mass of workers and peasants. According to Figes, it was Lenin who engineered a coup against the wishes, not only of the ruling class in Russia, but also of his own party members and millions of Russian people.

While it was clear that Figes thought that the Bolsheviks taking power was a tragedy, it was not clear what he thought might have been a better alternative. At times Figes appeared to argue that the mass of people were in favour of Soviet power, but at other times he attempted to argue that the Constituent Assembly was the body truly representative of the wishes of the people. In either case, at all times Figes seemed to disregard the real context of the events he used to support his theory, leading to contradictory arguments.

For example, he pointed out that the Mensheviks had, by October 1917, lost their base of support among the people but at the same time argued that the Bolsheviks should have formed a coalition with the Mensheviks so as to be truly democratic. He also argued that the mass of people were in favour of the slogan “All Power to the Soviets” but then went on to describe the Bolsheviks’ dissolution of the Constituent Assembly as undemocratic.

This inconsistency was reflected in Figes’ attitude to the topic of the debate as a whole. Woods had argued that any revolution is not a one act drama, but rather a process which, in Russia, established a planned economy that took the country from being one of the most backward in the world to the second most powerful nation on earth in just 50 years. In response Figes said it would be wrong to allow the scope of the debate to extend beyond the events of the October insurrection of 1917, but despite this did not hesitate to lay all the crimes of Stalinism at the feet of Lenin and Trotsky. Regularly he would interrupt speakers to ‘disprove’ them with an example of a crime committed under Stalin’s reign, despite the fact that the speakers were defending the actions of the revolution itself and the Bolshevik Party under Lenin and Trotsky prior to Stalin’s usurpation of power.

Highly subjective, unsubstantiated and arbitrary claims were also made, such as that the Bolshevik Party always was essentially a dictatorship of Lenin. This was apparently the reason Trotsky did not join it until 1917, which is false. It is also false that the insurrection was Lenin’s hair-brained scheme opposed by his own party, as Figes claimed – the Bolshevik Party was in support of this, as was its Central Committee, and the insurrection was supported by and organised through the Soviets themselves, under the Bolsheviks’ leadership.

Ultimately this is what Figes’ argument boiled down to: an emotive appeal to abstract morality in which he described the “millions of wasted lives” that were destroyed under Stalinism. His attempt to blame the Bolsheviks for these horrors was rejected by many in the audience and dealt with decisively by Woods when he pointed out that Stalin, in consolidating his power, physically exterminated the leaders of the Bolshevik party from 1917. If Stalin truly represented the ideas of Bolshevism, why would that slaughter have been necessary? 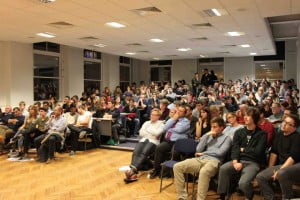 Following the contributions of both the speakers, the chair invited discussion, questions and comments from the floor. The debate on the floor was lively and interesting, marred only by Figes’ attempts to shout down anyone in the audience who disagreed with him. Some excellent questions were raised about Russia’s backwardness at the beginning of the revolution and the difficulties that presented for the establishment of a socialist society. Figes was questioned over his depiction of Lenin as a dictator within the Bolshevik party, with several members of the audience giving evidence showing that the Bolshevik party was in fact the most democratic party the world has ever known with open disputes and clashes within its ranks.

A number of speakers from ex-Soviet Union countries contributed to the discussion as well. Students from Russia, Armenia, Lithuania, Ukraine and Kazakhstan explained their own thoughts on the Russian Revolution. One of them, without the slightest basis, accused Woods of supporting the murders of her grandparents under Stalin (!). When a young Ukrainian student attempted to put a different view forward, he was abused and shouted down by Figes from the platform.

Others pointed out that firstly, those who attack Marxists by reference to war, starvation and persecution ignore the epidemic prevalence of these things under capitalism, and secondly that Stalin’s regime was not a socialist one, and was not supported by Lenin, Trotsky or any genuine Marxist.

Both speakers were given the opportunity to summarise their position following the discussion. Figes’ approach was aggressive and arrogant. This was very much in line with his conduct throughout the debate. This behaviour scandalised many of those present, who expressed outrage that a supposedly prestigious academic should act in such a manner. This clearly indicated a complete inability, not only to present a coherent case (which he patently failed to do) but an unwillingness to listen to others with a different point of view to his own. And this man claims to be a democrat!

In complete contrast, Woods adopted a reasonable tone, appealing to the audience to find out more about the topic for themselves so that they can make up their own minds. He pointed out that this debate is not merely of academic interest – we live in turbulent times with mass movements of people against their governments in 2013 from Egypt to Brazil to Turkey. In order to influence these events and shape our attitude towards them we must study the mass movements of the past. For this reason, the Russian Revolution is not just a historical event; it is also our present and our future.

It was Marx who said that “philosophers have only interpreted the world, in various ways; the point is to change it”. In putting on this event the Marxist Student Federation hopes to help students interpret this important event and to have inspired them to join us in the fight to change the world. The attendance and reception at this event was very encouraging, as well as the collection which raised £80, with half going to the strike fund of a local school for the teachers’ strikes in London next week, and half going to support the growth of the Marxist Student Federation. With the Federation going from strength to strength, be sure to keep an eye out for our next big Marxist Student event and contact your local Marxist Society to find out more about getting involved.

This article is so flagrantly biased it wouldn’t have looked out of place in Pravda.

Although Figes was certainly aggressive in his approach, he was not alone in his outrage at the complacent apologies and slogans of his opponent.

The main thrust of Figes’ argument was to put evidence at the heart of the debate, a standard not met by Allen Woods who gave many colourful references to, among other things: Sparticus, Fukuyama, streets flowing with blood and the spotless banner of the October but without making substantive references to historical records or even the October Revolution specifically.

The author accuses Figes of shouting others down, but he was responding to direct questions and it was only the incompetence of the chair which prevented discussion (why make the speakers wait until the end if so many people had direct questions) The Ukrainian in question egregiously dismissed the stories of Soviet brutality from ex-Soviet speakers as ‘random anecdotes’ and Figes was rightly annoyed.

Figes, is that you?

Someone pull an IP. Figes was shouting throughout the whole thing. The October Revolution was spotless. There was no violence.

That’s how the panel works. The purpose of the discussion was the October revolution. Not Stalinism. This article is biased and those who maintain the site offered Figes a chance to respond in 1500 words. And it’s “Spartacus.”

Woods offered people to come over to view the minutes from the Bolshevik party. For further reference, check out Bolshevism The Road To Revolution by Alan and look at his sources. You could also look at Year One.