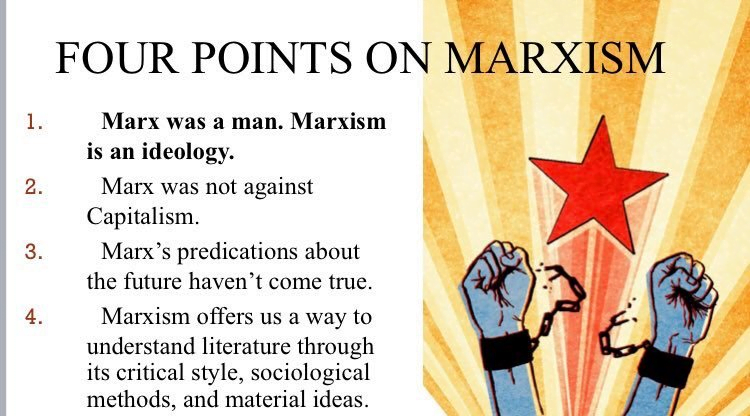 These four statements form the discussion points of an undergraduate English Literature theory lecture on Marxism at Birmingham University. Rather than being an accurate introduction to the basics of Marxism, it serves as a prime example of the ways in which Marxism is distorted in the field of academia.

Firstly, the statement ‘Marx was not against capitalism’ is such a clear falsehood to anyone who has come into contact with Marx’s work, that its inclusion even surprised many of the students on the course..

It is of course true that Marx recognised the progress that capitalism made from the previous feudal order. However, these lecturers incorrectly construe Marx’s recognition of capitalism having progressed society, and its development of the means of production as Marx admiring or praising capitalism for laying the foundation for socialism.

This is a complete distortion of Marx’s writing and his life, and is symptomatic of a fundamental misunderstanding of his theory. Marx wrote extensively about the ‘brutal exploitation’ of the capitalist system and actively fought for the end of capitalism, by building the first international and fighting in revolutionary movements.

Marx recognised capitalism’s innovations by stating that the bourgeoisie simply, ‘cannot exist without constantly revolutionising the instruments of production,’ but he also explained that this necessity for constant growth was unsustainable and would cause the eventual collapse of the capitalist system.

It is incorrect to assume that Marx recognising the historical progress of capitalism means that he wasn’t against capitalism in his time. This represents so-called academic Marxism exactly, as these lecturers take soundbites from Marx, dumbing his life’s writings down to that and strip it of its revolutionary content. More importantly, however, they ignore his actions, a trend inherent in academia. Anyone who looks at the life Marx led can easily see that he was a revolutionary and fought tirelessly for the end of capitalism.  It is ironic that point number one, expressing that Marx was in fact, a man, is explained, but these academics never use Marx’s life to lead the discussion, but take small segments of his writing out of context and focus on these.

The third discussion point of this lecture is also worth picking up on. Specific predictions about the future are hard to come by in Marx’s work, this is because he knew that the future was not mechanically determined but that the role of revolutionary fighters like himself could change the stage of history.

These academics would do well to remember Marx’s famous thesis on Feuerbach “philosophers have only interpreted the world, the point, however, is to change it”.  However, looking at the world today it is almost impossible to seriously think that none of Marx’s predictions came true.  Marx sets out that the capitalist system creates the conditions for its own downfall: ‘what the bourgeoisie therefore produces, above all, are its own grave-diggers.’ On this point Marx has been proved absolutely right. The internal contradictions of capitalism have never been more obvious as we constantly plunge in and out of crises – take the 2008 financial crisis and the current coronavirus crisis for example. We see more and more that the ruling class is fighting against the increasing radicalisation of the working class. This is not out of some moral position, as they claim, but out of a fear for what this will mean for them.

These ridiculous distortions of Marxist theory are typical of academia.

Bourgeois academics see Marxism as a purely intellectual pursuit and theory as merely a critique of capital. This can even be seen in the 4th point in this argument.

“Marxism offers us a way to understand literature, through its criticial style, sociological methods and material ideas”

Once again, Marx’s intention was to create a serious revolutionary organisation which could take the working class to power, not to analyse literature in a classroom. They distort the classic texts to reach unfounded conclusions such as ‘Marx was not against capitalism,’ or, commonly,  the ideas that Marxism needs updating, or that Marx was an economic determinist – focussing only on economics and casting everything else aside – in order to blunt the revolutionary edge of Marxist theory.

The idea of practical revolutionary action is completely dismissed as they can barely conceal their contempt for the working class, and crucially this does not serve the bourgeoisie.

Marxists must fight against revisionism and reaction wherever it rears its head and defend the revolutionary conclusions of our theory. Bourgeois academics may try to blunt it to serve their own position, but it is vital to remember that Marxism is not merely a critique of capital, but a revolutionary doctrine for overthrowing capitalism.

As Lenin wrote in The State and the Revolution

This is what we are seeing before us and we must fight against it. We must tell the truth on Marx and his ideas. If we leave this up to these academics, we will never win the struggle.