Published by Marxist Student on July 9, 2021

Students all over the world are seeing the holes in the education they are given. It is no longer enough to dispel myths to young people through their schooling. More and more, people are turning away from the lies told to them. Here, Iris d’Honfleur, a recent A Level student, looks at her experience of A Level History.

In the UK, teachers are required to maintain the appearance of being ‘apolitical’. But within  education  under capitalism, this is impossible. Courses are designed to indoctrinate us into believing that our current existence under capitalism is ‘natural’ and progressive. One of the most powerful courses through which to promote this idea is history.

The A Level History course is steeped in propaganda. The Edexcel course includes a section entitled “Protest, Agitation and Parliamentary Reform” — an overview of how the British parliamentary system developed between 1780 and 1928.

The history of society is class struggle

Unsurprisingly, while covering this lengthy period there is little mention of the British Empire or Britain’s role in the slave trade. Instead, huge emphasis is placed on the idea of a slow and incremental development of our ‘democracy’. This idea of  incremental development certainly serves a purpose, attempting to instil in us the idea that gradual reform is the best way forward.

This module is taught alongside others that focus on things such as Fascist Italy, serving to contrast Britain’s supposed political stability with instability and authoritarianism in other countries, breeding  a feeling of ‘British Exceptionalism’.

The course thus attempts to instil in students a sense of pride over our constitutional democracy, and serves to highlight, even if only subconsciously in students’ minds, the supposed importance of slow reform. It is very clear who this idea benefits, the ruling class who are vehemently opposed to any fundamental change to society which would challenge their wealth and power..

During this lengthy course, it is also never mentioned that there was a  revolution in one country after another, including in Britain, which completely upended the existing order and brought  capitalism onto the stage of history. In fact the word ‘capitalism’ itself is rarely mentioned, creating the idea that capitalism has always existed, despite it being only a few hundred years old.

The ruling ideas are the those of the ruling class

Alongside this, the idea is pushed that extra-parliamentary protest is not what achieved the reforms and changes to society that occurred between 1780 and 1928. The course does concede that protest movements added pressure to the ‘proper’ methods of making change, but otherwise essentially asserts that all change came from an enlightened government at the ‘right’ time.

The actions of those who fought for things such as extended voting rights are thus diminished, when in fact these mass movements were the driving force behind all the reforms.

It was the bitter struggle of the Luddites and the early trade union movement, which at times resembled a civil war in England, which resulted in the repeal of the hated Combination Acts in 1824. It was the ‘Captain Swing’ agricultural uprisings of 1830-31 which resulted in the Reform Act of 1832. The great revolutionary movement of the Chartists from 1837-1848 shook the country from top to bottom. The New Unionism of the 1890s was a bitter class struggle which won rights for the working class. The list goes on through naval mutinies to miners’ strikes to the 1926 General Strike.

This is the real history of protest, agitation, and reform. It’s lesson is that no reform has ever been granted willingly by the ruling class. Reforms are hard-won by mass movements of the working class fighting to fundamentally transform society.

But the history we are taught is of gradual linear change where the dominant idea is that we should simply wait for change to occur if it is moral. Students are encouraged in this way to submit to the capitalist system, rather than to actively fight for the change that is so necessary.

Our government and it’s bourgeois politicians would have us believe that education and politics can be separated, and that what is taught in schools can be factual and not ideological.  This pretence only serves to make education all the more ideological, as it attempts to lead young people to believe in the ‘natural’ existence of capitalism.

The reality of the capitalist system today is leading young people to revolutionary ideas. In order to stop this, the education system must actively hide the truth about the revolutionary struggles of the past.

A most excellent critique, i really enjoyed and am looking forward to more! 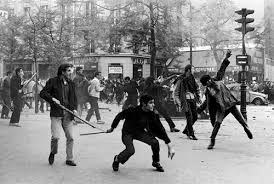