Suttons bring in police to break the strike, but drivers stand firm

At midday on Tuesday 23 January there was a showdown at the gates of Eastham refinery. Four Suttons Tankers appeared on the road, with the intention of crossing the picket line, along with a heavy police presence. This was an open attempt to break the strike.

Three demonstrators, in support of the striking drivers, were arrested as they attempted to stop the tankers from crossing into the refinery. They have since been released, with one being cautioned and the other two being charged with willful obstruction of a highway. Unite the Union is offering legal advice and support to these comrades.

As we have reported previously, 33 tanker drivers, employed by Suttons Tankers, are on strike against the imposition of new contracts. These would lead to cuts of up to a third of their annual salary and destroy the previous terms and conditions that the worker had in their old contracts (www.marxiststudent.com/support-the-striking-suttons-tanker-drivers/). In the face of these attacks their union, Unite, called the workers out on indefinite strike starting last Friday.

Steve Gerrard, an officer for Unite the Union, has said:

“The resolve, zeal & courage demonstrated by these workers, sends a clear message to their bosses, that supported by their union Unite, they will continue to fight to retain and build upon those terms & conditions for years to come. That is why we are the Fighting Back Union!” 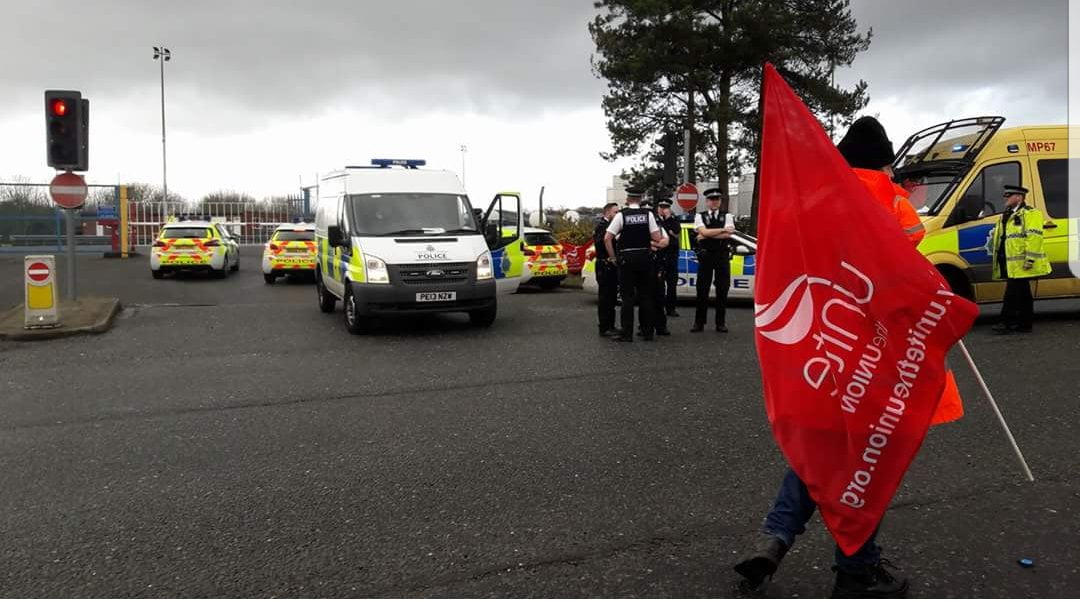 At 4pm on Monday, word came through that there are now 3 ships on the Mersey, unable to dock and offload their cargo, due to the strike. Each one of these is losing £40,000 a day for its respective company. Pressure has been mounting on Suttons and in the face of the resistance from the workforce it was only a matter of time before they attempted a test of the strike’s strength. The tanker drivers and their supporters in the labour movement were prepared for this and have been waiting.

In an open provocation, earlier in the day at 12.30pm, a driver from Thomas Hardie Commercials Ltd. snuck past the picket in a car. It seems this person had arrived to pick up a unit for regular servicing which is usually done by some of those on strike. After getting past the picket, this individual removed one of the trucks from the site.

The response of the tanker drivers to this act was swift and, as the information was circulated, their supporters were called into immediate action. In less than two hours of these events taking place, the Facebook page of Thomas Hardie’s had to remove its reviews tab because of the number of comments that were being posted talking about the company’s strike-breaking activities. It seems that the company weren’t too happy with this information getting out and tried to shut down any means of protesting against them. 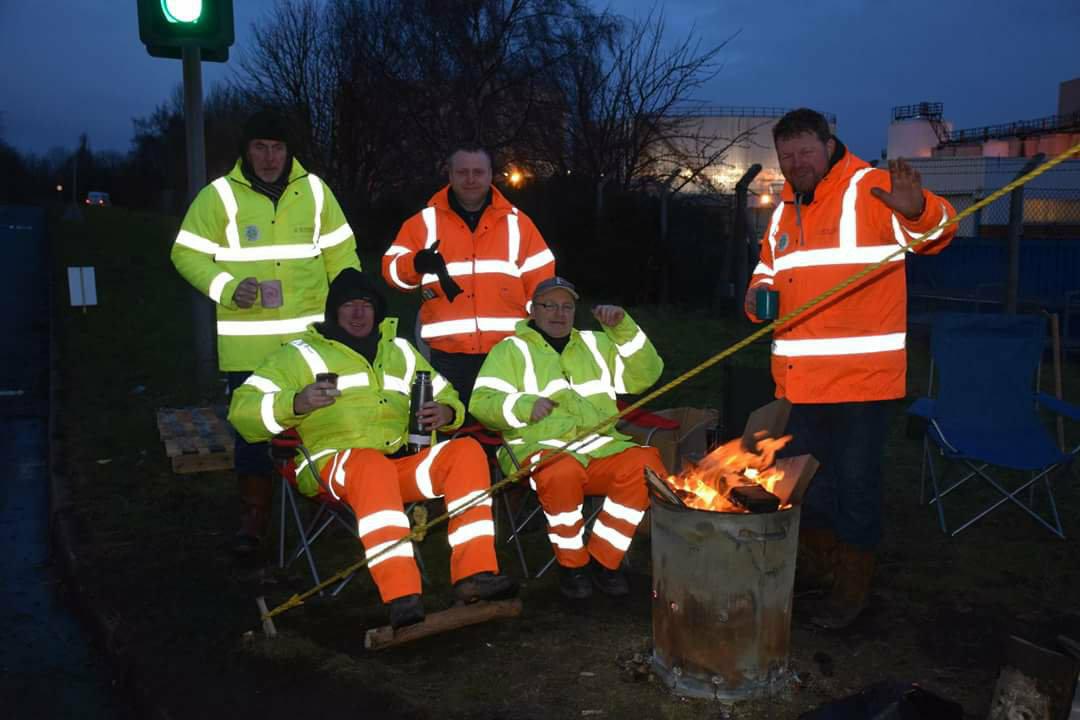 The role of the police – which side are you on?

The events of Monday set the scene for further efforts to break the strike the next day.

The first tanker which tried to cross the picket line on Tuesday was being driven by Gary Lawson, the UK Garages Manager for Suttons. The rest, it is believed, were agency staff. If this is the case then it may be in direct violation of trade union legislation which says that agency staff cannot be used to break a strike. After the four tankers were loaded up with bitumen they were taken out of the refinery to Suttons’ nearby site at Widnes. The quantity of material stocked in the refinery is too much for these four tankers to have removed and since this incident nothing else has been taken in or out of the site. The picket line remains.

It is important to look at the role that the police have played so far in this struggle. At the end of the day, as Marxists have pointed out, the state can be boiled down to being “special bodies of armed men” in defence of private property. The police and military are not there to protect members of the working class, or their rights, but they will rather be used by employers to protect the interests of big business. In this instance the police were blatantly used to defend Suttons’ attempts to break this strike and may have been complicit in the flouting of trade union legislation. 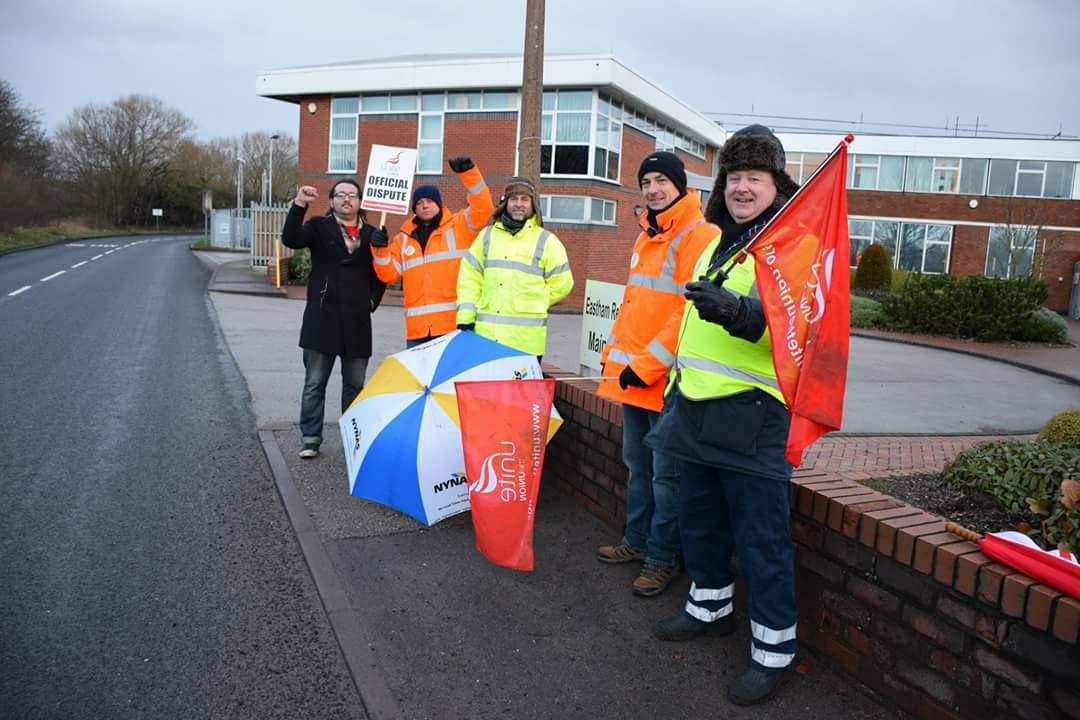 The only thing that working people can rely on is their own strength in organisation and the solidarity of their fellow workers, which has been shown a great deal during this dispute so far. In spite of the events that have taken place in the last two days, the tanker drivers are standing firm.

Ken Mills, senior rep on site for Unite the Union, has sent us the following message:

“The lads are standing strong despite the chaos of today, it only served to make our resolve stronger. The support shown by everyone, including yourselves, is something we draw strength from.”

Events are moving quickly as the dispute escalates. We will do our best to keep our readers updated on what is happening but for more up to the minute news you can follow us on Facebook at Liverpool Marxist Society or on Twitter @LivMarxSoc .

UPDATE: As of 8pm on Tuesday, news has filtered through that Suttons Management are considering entering in to negotiations with the union. They’ve also said that they will no longer be sending agency staff in to cross the picket line, in an attempt to break the strike. 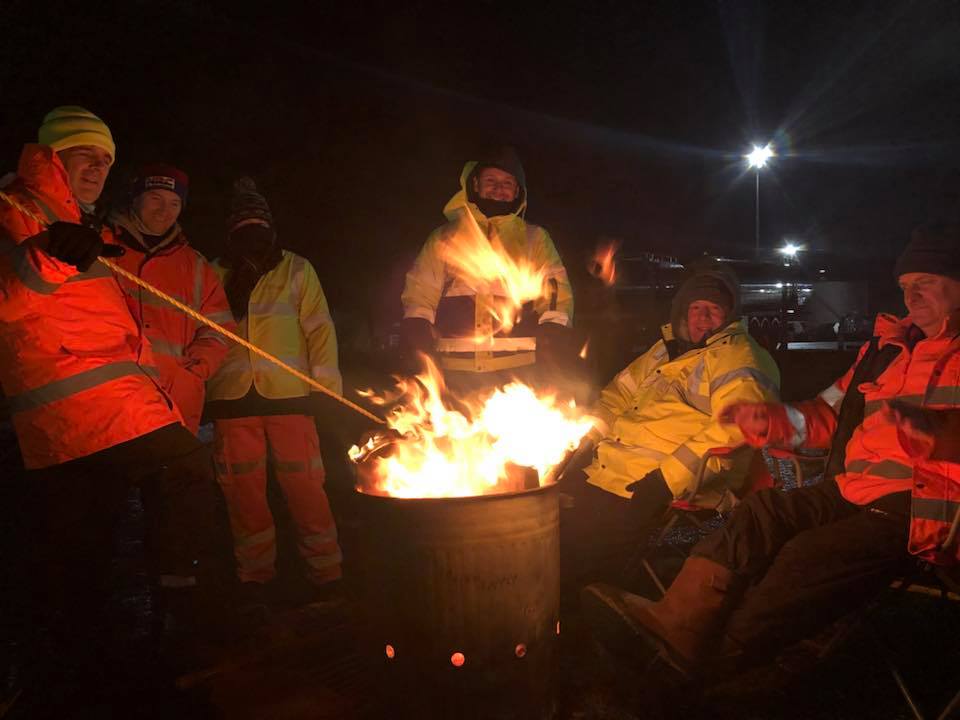