Guy from City, University of London Marxist Society interviewed Keith Simpson, President of City UCU, and Daniel, a City UNSION rep on the picket line this week about ongoing strike action over pay, conditions and pensions.

Keith, first of all, could you give us an idea of how it’s been going over the past few weeks striking over the four fights and pensions dispute, and what the mood is like among those on the picket line?

“The mood’s good, we’ve been winning the argument. Now we need to make sure that management start listening. So we’re going into a new phase with another ballot coming up so that we can take action in the summer term. Basically we’re looking to extend our ability to take action short of strike by adding a marking boycott to the ballot.”

The struggle continues, then. And you mentioned management – what do you think of the position of City university management? Several students at City who have emailed the Vice Chancellor Anthony Finkelstein about the strikes have received flippant and hostile responses. He has shut them down labelled anyone who supports the strike a left-wing extremist.

“He’s behaved very badly, trying to bribe union staff to cross picket lines so that they can keep the university open and to bully staff with the threat of 100% pay deductions for refusing to reschedule classes lost due to the strikes. We have resisted those things and so we haven’t seen them come to pass. But that’s been the attitude [from management], that this strike is a waste of time, and it’s been quite an aggressive response both to students and, indeed, to staff.

But it’s not a waste of time, and City needs to wake up and see really what they preside over. Staff are demoralised, they’re underpaid and they’re incredibly overworked. We’ve still got lots of casualised staff who need a proper contract. And this can’t be solved at City alone; it’s got to be a response from the whole HE sector. Presidents and Vice-Chancellors of universities should be arguing that this sector needs funds. It brings millions and billions of pounds into the economy. We need some action on a collective basis across the HE sector to solve this dispute.”

That’s a great point. Actually, it feels like we’ve really seen the class divide between upper management and everyone else at the university during this dispute. You mentioned a wider national response: what do you think the role of solidarity and coordination between strikes can play in this struggle? And in the struggle against all the attacks workers are facing up and down the country right now?

“The position is really that we’ve worked through Covid; we’re in this situation where we’ve got the reality of massive increases in inflation; we’ve got the fuel poverty of vast sections of the workforce and those who are on benefits. I think we need a coordinated response. There is money in the economy. I’m sick of hearing that we’re the sixth largest economy in the world, and seeing that we’ve still got people going to food banks. So I think the trade union movement has got to get together and have a coordinated response to this disgusting Tory government.”

On that inspiring note, thanks very much for speaking to us Keith, and solidarity with your struggle! 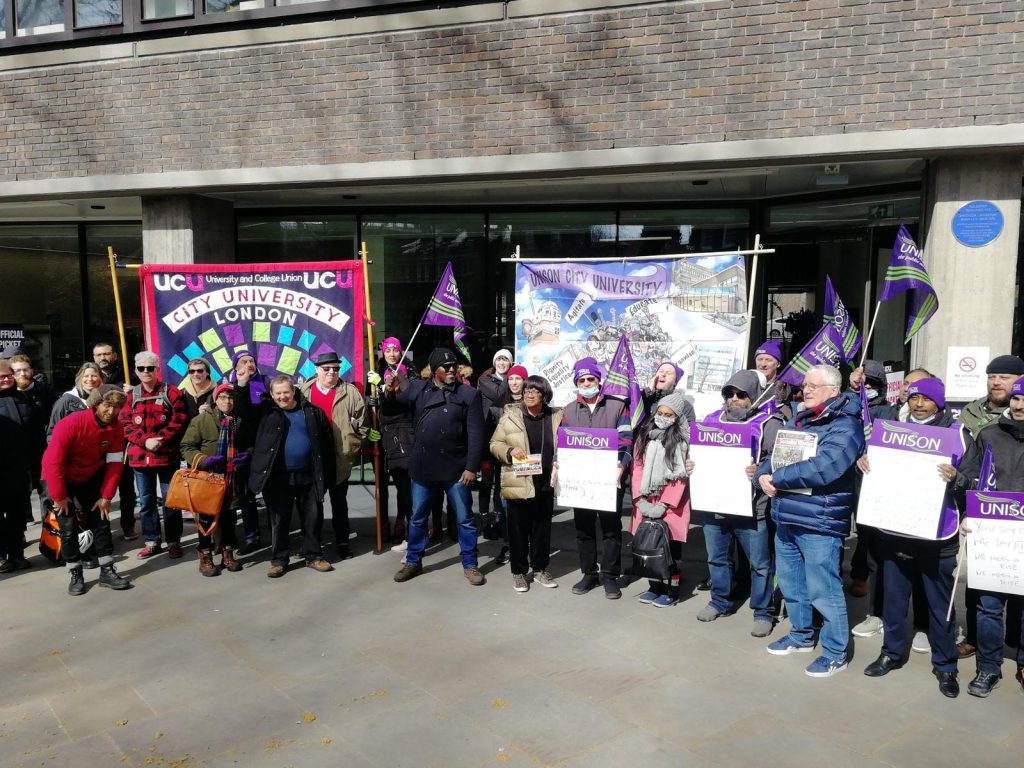 We also interviewed Daniel, a Unison rep, about the strike amongst non academic and management staff at City University.

So Daniel, why is Unison at City on strike?

“We’re on strike for better pay; we haven’t had a pay rise in line with inflation for over a decade. Year on year, our pay has gone down in real terms, and now, with inflation rising at a phenomenal rate, we’ve been left with no other choice but to take this action to force the university back to negotiations and give us something that will actually enable members to afford the basic necessities in life. At the moment, people are making horrible decisions about heating their homes, and feeding themselves and our families, and this can’t go on.”

“Firstly, we had 65% turnout in our ballot, getting over that anti-trade union legislation. And then, on our first two days of action, we completely shut the university down, because we have amazing density in security, and every single member of the security staff but one went out on strike. The university couldn’t open without security, and this shows how important Unison members are to the functioning of the university, that without them the doors had to close. This really shows the strength of works here at City.”

Would you say this is different to previous actions that the Unison branch has tried to take in the past? Would you say there’s been a transformation in the level of militancy in the unions in general, or specifically in your branch?

“This is the first time we’ve been on strike for eight years, though we’ve been an active branch for quite a while, we’ve been hampered by the anti trade union laws. Having a desegregated ballot has allowed us to do it without being tied to a national 50% turnout. For a long time our members here have wanted to take action, and they have consistently hit the threshold themselves but we haven’t been able to do it until the ballot was desegregated.”

“Come down to support our picket line when we are out, and support our strike fund. If you’re a student here at City or even just part of the wider community, write to the university president and let him know that you support our action. We can’t go on like this. We’ve got members turning to food banks, members under huge amounts of stress because they can’t afford to make ends meet. This is the decision of people like our president, who earn over £300,000 a year. It’s there choices which mean that we stay on this low pay, which keeps going down.”

Obviously you have a mandate to strike for quite a while, if you don’t get any movement on your demands, will you be out again?

“We’re open to negotiations, and want to resolve this, but we do have the mandate, so strike action remains very much on the table. It’s always a last resort – we all want to be inside, working with students – and it’s up to management to stop this happening again.”

To learn more, follow City UCU on and City Unison and donate to the Unison strike fund.