This is a screenshot from the Southampton Conservative Society group chat. This is what our campus’ Tories think about nurses. Nurses currently work in appalling conditions in an NHS that has been underfunded and attacked by the Tory government. 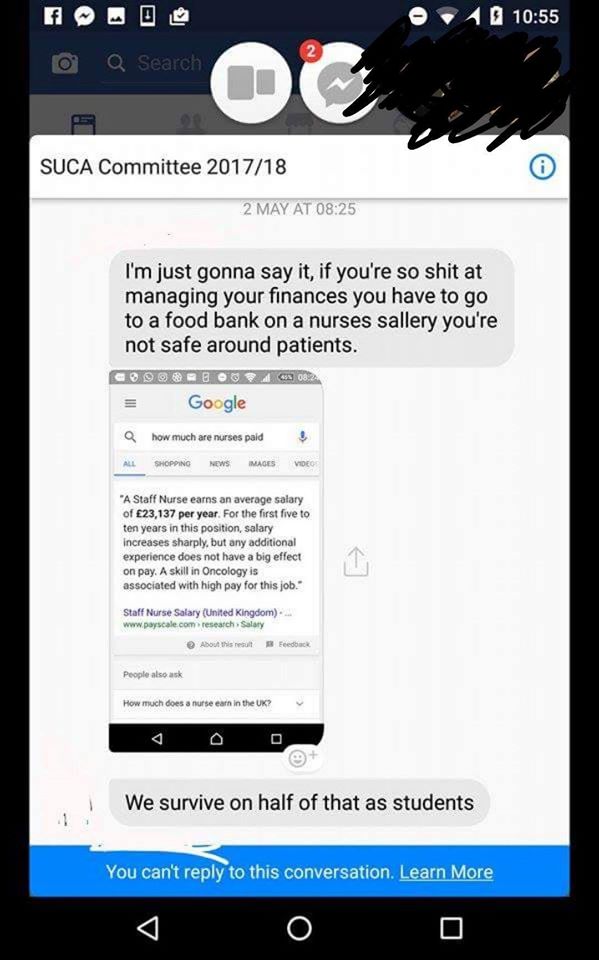 The arrogance and ignorance of the comment is that unlike students, nurses often have to care for families of up to 4/5, don’t have cheaper rents from shared housing, don’t get student discounts, don’t get subsidies from parents, and pay taxes such as council tax that students don’t have to pay. Nursing is a professional job requiring years of training. The fact that the Tories think that nurses living on a wage that leads them to use a food bank for saving and caring for people’s lives daily, whilst a privileged few sit on billions from inheritance and working people’s exploited labour is acceptable is disgusting and shows how detached they are from the real experience the majority of us are going through.

A nurse has started an online petition to demand an apology from Southampton University Conservative Association. We have also received news that a student nurse has written to a local Tory MP demanding an apology: https://www.change.org/p/southampton-university-southampton-conservative-society-must-apologise-to-the-nursing-profession

As of this morning, 6,600 people have signed the petition demanding that the Conservative Society give a proper apology for the screenshot message. We would like to thank Danielle Jade, the nurse who set up the petition, for her support in spreading the real opinions of the Tories for everyone, students, nurses, the many to see. Solidarity has been forged between our students and nurses.

The students’ union needs to engage in the fight for students and nurses, both groups whom they represent as a political body, and yet refuse to get political about. Students’ and nurses’ interests are not separate from political ideas, as the screenshot message showed us. By not being political, the students’ union is not standing up for us but standing by and watching as the Tory government, the tool of the establishment, attacks us with cuts and slander.

In the past the power of student unions in politics has been shown. The council tax you don’t pay as a student, the student railcard discount you can get, the rights and support you get as a student were never handed to us by the established few, but were fought for by national, united student union campaigns. We can do so much more like this.

The best thing we can do to deal with these horrible views, which are integrated in the opinions of the establishment class in society, is to fight on a socialist platform to defend the NHS, to defend the working class as a whole and to demand the nationalisation of top industry under people’s control to take power out of the hands of private individuals who exploit workers’ labour leading these same workers to use food banks.