This vote comes after the events which have unfolded since last November when the Vice-Chancellor, Sir Christopher Snowden, announced his ten-year plan of restructuring for Southampton University, which included merging 8 faculties into 5 and cutting 50-75 academic staff. Faced with an apolitical students’ union that has long-ago lost touch with the student body; and by threatening the university staff union with legal action if they dared spread the word before the announcement; plus no consultation of or communication with staff or students outside of university higher management; the Vice Chancellor hoped to let the cuts slip under the radar without resistance whilst lining his own pockets with a £70,000 salary increase.

Instead he created a situation that soon spiraled out of control. After his announcement it was revealed that not only was the Vice-Chancellor making these cuts but he was doing so while sat on a salary of £424,000 a year and that the university was apparently able to afford a £300 million infrastructure project in early 2017. To top it all off, just a few days after staff were told to pack up, a job vacancy was advertised for a chauffeur to drive around university management. 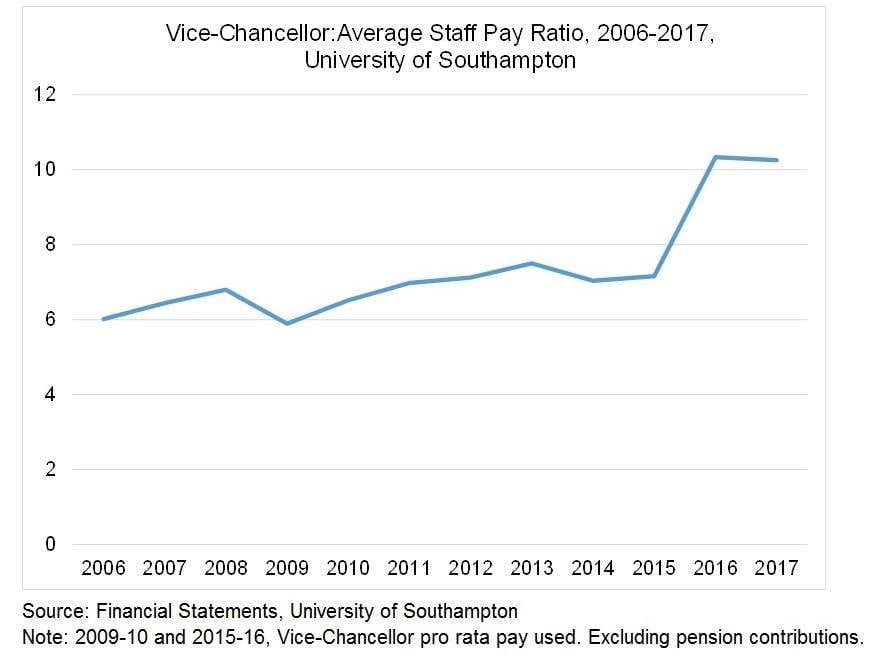 The students fight back

Naturally, the idea that staff members’ livelihoods could be chucked out the window whilst funding could be found for building projects and excessive managerial comfort outraged many students. They, along with Southampton Marxist Society and Southampton University Labour Society immediately organised a fightback against the VC’s plan under the banner of Southampton Students Against University Cuts. The group linked up with the local Labour Party, and the local UCU and Unison branches (representing staff) and with a petition to the students’ union, it opposed the Vice-Chancellor’s cuts and demanded that his salary should be cut instead.

The proposed restructuring comes in the context of financial pressures for both staff and students; many staff have experienced a pay cap since 2010, whilst students and young graduates now face unprecedented levels of debt following the trebling of tuition fees in 2012. The Vice Chancellor’s pay rose to £424,000 in 2016-17, representing a 53% increase since 2012. We believe that this level of pay, in the context of staff job cuts and high student fees, is corrosive and counter to the interests and values of our university community, and does not reflect leadership to either staff or students. The first savings in the restructuring should therefore come from the pay of the Vice-Chancellor.

(An extract taken from Southampton Students Against University Cuts’ petition.)

Within 2 days, 416 students had signed the petition. 35 people turned up to an initial organising session, and campaign stalls on campus were then manned for two consecutive weeks to spread information. The Vice-Chancellor sensing the storm brewing decided to run a Q&A session for students to “clear up any issues”, which was attended by 100 students and a summary of which can be found on the SotonTab’s article.

Nobody is quite sure how, but the senior member of staff has reached the conclusion that the university is “making the world a better place.” The Vice Chancellor and him both loudly state that they are from working class backgrounds, practically arguing about who had it worse growing up. Turns out the Vice Chancellor used to “sleep on other people’s floors”. You heard it here first, people.

It’s likely that the session is wrapping up. Snowden delivers a speech, declaring that “nobody is actually being made redundant” (no, we’re not sure what this means either), talking about how he argued against the last student fees increase.

(An extract from the SotonTab’s article on the VC Q&A session.)

Throughout this, the controversy only increased as it was established that the Vice-Chancellor sat on the university panel that decided his pay. Students in the chemistry department launched a separate complaint as their department was hit particularly badly by the cuts. In response the Vice-Chancellor promised to descend from his ivory tower once again to explain to them why their education had to be attacked by their own university. The session was hurriedly organised and announced a couple of hours before it was due to commence for the benefit of the chemistry student body. In the end the Vice-Chancellor didn’t even turn up and sent a member of senior management instead. A few days later some of the chemistry staff had already packed up to leave, pushing the burden of teaching and organising the department onto even fewer staff.

This is a political issue

Throughout all this, the Vice-Chancellor has repeatedly insisted that he was being forced to make cuts to balance the university budget (which has been hinted to be running on a deficit) and to compensate for lower government funding. In this, he makes a valid observation. In recent years, government funding of universities has been reduced, and corporate funded research has become narrower and less available. The capitalist system, having hit a crisis, is forced to cut back on public spending thereby opening up education, healthcare and other public services to the private sector – creating new avenues of profit for capitalists. Meanwhile the private sector itself is less likely to invest in areas like university research, where any potential gains are long-term ones, because the capitalists need to make a quick profit to in order to survive the crisis.

Some people have complained that the Southampton Students Against University Cuts campaign should not be politicised and should just be about defending staff jobs. But it has already been politicised by the Vice-Chancellor, by the government, by the university’s financial investors and by the capitalist class all of whom seek to defend and maintain the interests of a society driven by the pursuit of profit.

This disastrous 10-year plan does not need to be implemented. There are enough resources in society to provide free, good quality education for all. But to realise this potential we would need to run society in the interests of the many, not the few – in the interests of need, not profit. This is a political struggle that goes far beyond Southampton University, and it’s not one that the Vice-Chancellor will ever take up. He’s nothing more than a manager for the capitalist class, and is rewarded for making cuts to education with an enormous six-figure salary. If this struggle is to be successful it must be taken up by the students’ and staff unions who can link up with other unions around the country and take the fight to the capitalist class, its managers, and their crisis-ridden system. 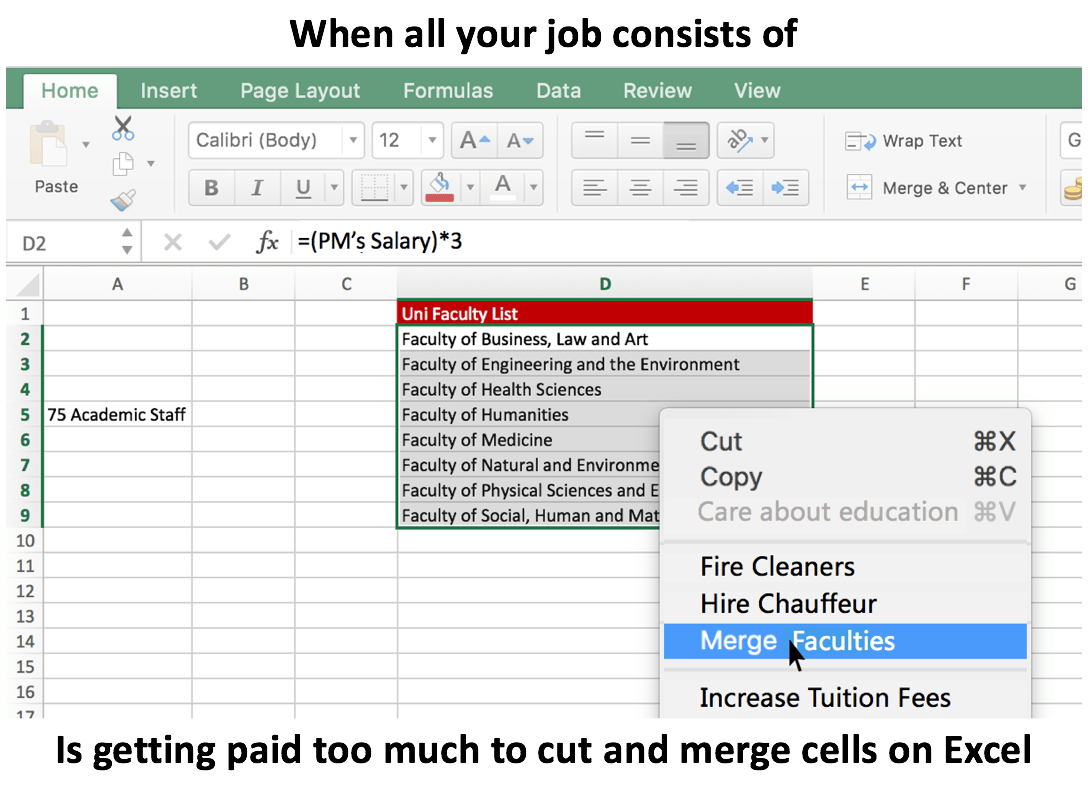 Under the pressure from the result of the student vote, the student union has announced it will take the petition to the university council. Whilst we endorse this move, the university council has already tried to obscure the fact that the Vice-Chancellor sat on his own pay panel and have backed him every inch of the way through the cuts. They are all cut from the same cloth. We shouldn’t expect anything from trying to bargain with these people.

The students’ union, meanwhile, takes pride in its “apolitical” stance and didn’t bat an eyelid until pressure from students forced it to take action. An interview with the Vice-Chancellor by the students’ union president conducted just days before the vote result was announced has no mention of staff cuts, the Vice Chancellor’s salary or even the student referendum! Instead the Vice-Chancellor used the time to promote himself through a cheery, amicable conversation, which was then used as university advertising.

In this farce it is clear that change is needed. Some are already pointing to the success of the campaign at Bath University which ended up in their £468,000 a year Vice-Chancellor being ousted entirely. The campaign at Southampton has been in touch with the Bath students for support in developing campaigning tactics. This has occurred despite years of student union bureaucrats telling us that the student union doesn’t need to be part of the NUS and that it doesn’t need to engage in a coordinated movement to defend education on a national scale. We need a national strategy, not just to remove this or that Vice-Chancellor, but to take on the cuts to education and the system that makes them inevitable. Our students’ union, which must become part of a fighting NUS, is key to that struggle.

This first round of cuts is just the start. There are more on the way. The students’ union needs to be radicalised in light of this campaign. We cannot tackle the problems that we face, that of the failures of our economic and social system unless we unite with all others fighting against the same problem. We must link up with the political movement in this country that is fighting for our interests – the movement around Jeremy Corbyn’s Labour Party. We won’t see an end to cuts to our staff and budgets unless we put control of education in the hands of the students and staff.