SOAS, you have run out of excuses

The Justice for Cleaners movement held a militant and determined protest on Monday 18th April at SOAS (School of Oriental and African Studies) University of London, which was well attended by approximately 200 people. This included unions, student groups, societies, academics and even Guardian journalist Owen Jones, and this was a particularly positive sign given the time in the academic year. The demonstration was summed up by one of the key leaders of the Justice for Cleaners movement, a cleaner herself, Consuelo Moreno when she simply said “SOAS, you have run out excuses”, in movements demand to award cleaners to be employed directly by the institution it works for. Recently an external consultant had concluded that the move to bring cleaners in house would be cost-neutral which seemed to be the final nail in the coffin for the SOAS managements continual sidestepping of the issue.

The demonstration became heated at one point as the management led by Valarie Amos, director of SOAS walked right by the cleaners demonstrating outside the main building, leading the protesters to chant passionately “cleaners in, management out”. The cleaners themselves were absolutely clear and resolute in their one demand, which was to be brought in house by SOAS immediately and to be treated as all other employees at SOAS do. Currently SOAS management are reviewing a new contract for the cleaners. Currently they are employed by a multinational outsourcing company ISS which has continually threatened, exploited and stigmatised cleaners, with many still living with the memory of their former colleagues who were deported because of the actions of ISS. 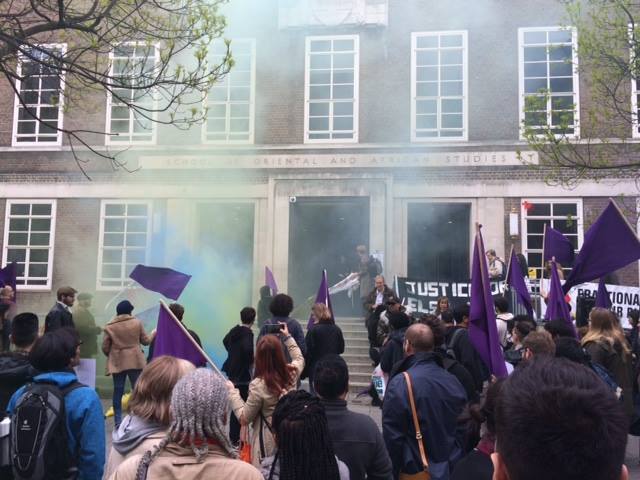 One striking facet of the demonstration was the depth of support amongst a wide variety of societies and groups who stood in solidarity and helped in raising awareness of the cleaners’ movement. The SOAS Marxists were included in raising awareness about the campaign and mobilized members to show solidarity, as did the newly created SOAS Labour Society whose Co-President Will Sheret managed to get Owen Jones to speak at the event. Unison members, fractionals for fair play, the Palestinian society, NUS Black Students campaign were among others, all visible and made their voices heard in solidarity with the cleaners. It showed the depth and growth in the movement. Far from the management’s hopes of the movement dying down, it is growing larger, wider, and ever more militant as the growing awareness of the privatisation of the higher education is hitting home into the consciousness of an ever growing number of workers and students. 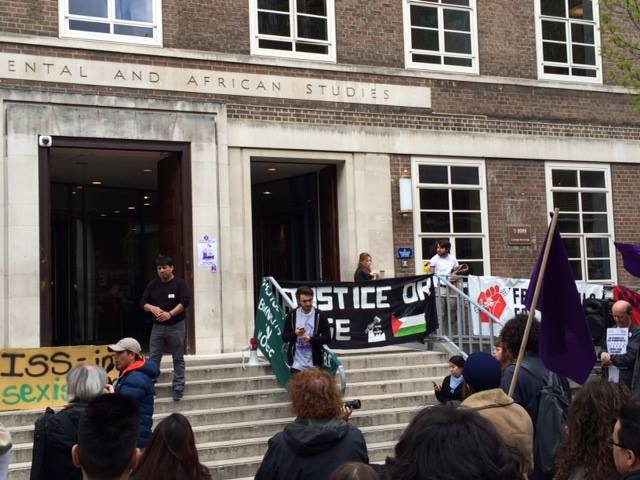 The protest however caused controversy when some ultra-left students’ graffitied school buildings and threw paint and smoke bombs, with the cleaners having to clear up the mess. Understandably these measures have clearly alienated some members of the student body, the overwhelming majority of whom who genuinely support the cause of the cleaners. It is crucial at this point that we remember the real cause of what the cleaners are fighting for and not to be side tracked by individual acts of defiance. Initiatives like these have and will only serve to embolden the management. The Justice for Cleaners campaign have won very important concessions throughout their ten year struggle including a London living wage, holiday pay and sick pay, through solidarity, protests and strikes. Their demand is basic, to be brought in house and be treated as all other workers, not a commodity sold to highest bidder. Their campaign has an overwhelming mandate amongst students, academics, unions, and general staff and the emphasis must be now to educate more people and grow the movement further; not to alienate otherwise would be supporters of the movement. Finally the cleaners themselves essentially hold the largest bargaining power of all, because the ultimate power of labour is labour. The withdrawal of labour is the strongest action any exploited labour force can take and the cleaners themselves must know that they themselves hold the strongest bargaining tool against the SOAS management. 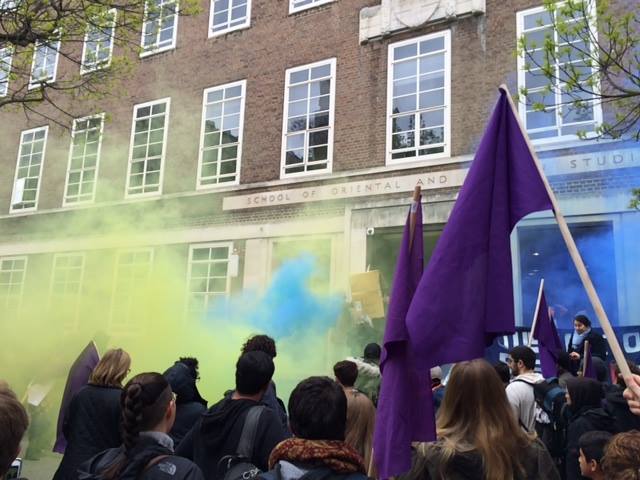 As Marxists, we also would clearly emphasise that their cause is strictly not isolated from the wider process of marketization in the higher education system, nor publicly owned sectors institutions everywhere. In academia we see this from the growth in intellectual property rights, tuition fees, the cutting of maintenance grants, to the outsourcing of cleaners which has everything to do with the rotten system of capitalism which is being forced to commodify more and more services for profit in order for it to survive and grow. It will continue to drive down standards and look to exploit ever more publicly owned industries as the crisis of capitalism continues, driving down standards to remain profitable. It is only through the successful struggles against this commodification and marketization, like through the justice for cleaners movement, that we will we be able to fight back. It is only through standing in solidarity with movements such as the justice for cleaners that we will be able to go on to win further struggles against privatisation from academia, the NHS to the Royal Mail. It is at this point that the SOAS Marxist Society and the Marxist Student Federation would like to reinforce their solidarity to the cleaners and urge all to not become side-tracked from the wider systemic issues at play and support the cleaners in their struggle.