Cecil Rhodes was a British imperialist. He has been described as the ‘architect of apartheid’ in South Africa due to his leading role in the colonial regime, in particular through altering land ownership and voting laws to displace and disenfranchise black people.

He was also a student at the University of Oxford. When he died in 1902 a large sum of his wealth – much of which he’d amassed running diamond mines on slave labour – was donated to the university. To thank him for this ‘great generosity’, a statue of Rhodes was placed on the front of Oriel College, overlooking Oxford’s High Street.

This memorial to colonialism remained unchallenged until 2015 when a wave of protests across university campuses in South Africa called for the removal of similar statues of Rhodes. An allied movement soon emerged at Oxford University.

The Rhodes Must Fall campaign demands the removal of the Rhodes statue. As well as this, that Oxford should no longer commemorate the countless imperialist leaders it has produced in its history, that it end Eurocentrism in its curriculum, and reduce institutional elitism, which in particular leads to a hostile environment for Black students.

In 2016, Oriel College stated they would not be removing the statue. This was later revealed to be a result of wealthy donors having threatened to withdraw and withhold up to £100m in donations should Rhodes be removed. This despicable and disheartening decision put a brake on the movement.

It was not until last week, when Black Lives Matter protestors in Bristol toppled a statue of slave trader Edward Colston and threw it in the river, that the Rhodes Must Fall movement was reignited.

A banner appeared across the street from Oriel College, announcing ‘Rhodes, you’re next’. Well over a thousand people turned out to the peaceful protest on 9th June, a completely unprecedented response which was met with mounted and armed police to protect the college.

The protest this time was explicitly tied to the Black Lives Matter movement and, in turn, the university’s racism to systemic racism worldwide. As a result, masses of people unattached to the university were drawn in to express their anger and solidarity. Protestors blocked the street and knelt in memory of George Floyd. There were chants of ‘this is what democracy looks like’, ‘no justice, no peace’, and ‘the people united will never be defeated.’

Some asked for the university to examine what it ‘stands for’. Sadly, the reality is that what the University of Oxford stands for is the interests of the ruling class which funds it, and so currently the statue of Rhodes remains.

There is no question that it must be removed. Taking it down would be a powerful and symbolic response from Oxford university and its colleges against the veneration of colonial violence. However, if that is the end of the struggle, symbolic is all it would be.

Removing the statues, renaming the buildings, or improving complicit curriculums will not solve Oxford’s elitism. The institution exists to educate and train up new layers of leadership and representatives for the interests of the ruling class, for decades now the majority of leading politicians have been educated at either Oxford or Cambridge. It is these people who actively fight to defend the capitalist system, a system that requires and maintains racism as a tool with which to divide the working class..

Rhodes Must Fall must be only one aspect of mass mobilisation and solidarity among all people harmed under capitalism and imperialism worldwide. It is not enough simply to tear down these monuments to colonialism and imperialism, we need to organise to bring down the entire decaying capitalist system itself. 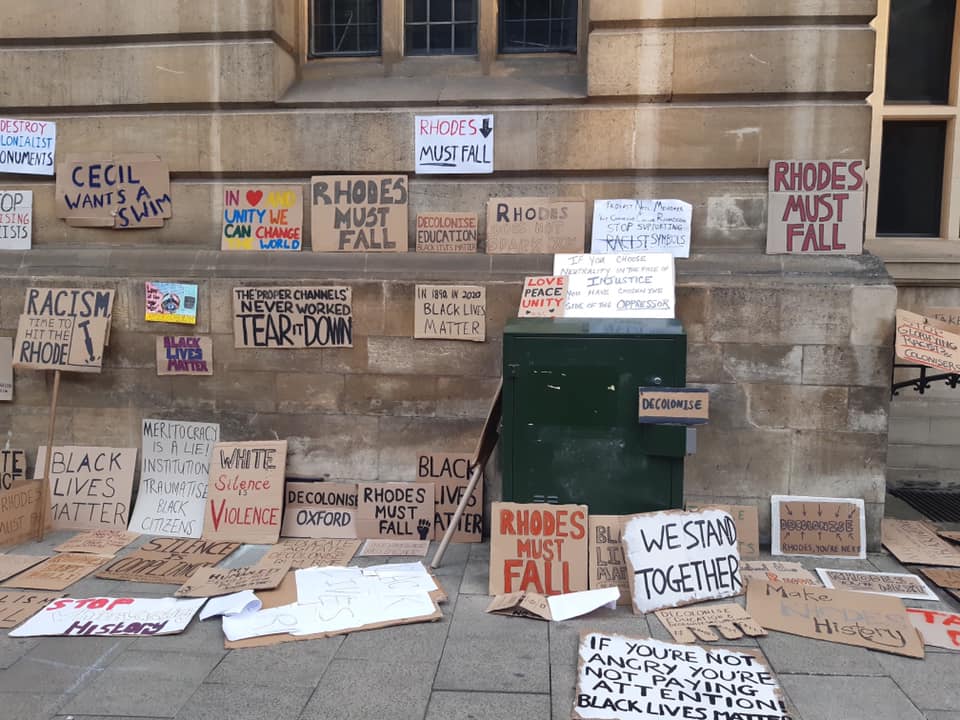