Thursday 6th February 2014 saw the third round of joint strike action between UCU, Unison, Unite and EIS in defence of their pay and conditions. While University Vice-Chancellors and senior managers are on six figure salaries and receiving pay increased of 8% this year, staff and lecturers have,  since 2008, suffered a 13% real pay cut and are now being offered a measly 1% increase.

Marxist Students were out on the picket lines supporting our staff taking strike action. 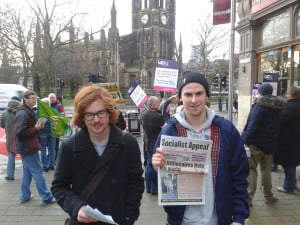 Today (6/2/14) members of the Newcastle Marxist Society joined UCU, Unite and Unison members on the picket lines to show solidarity in the struggle for a fairer education system. The strike is not only about pay and society members, through discussion and the distribution of 100 flyers, made points about the wider issues in education; the casualisation of work – notably zero hour contracts, cuts to departments, the commodification of education, the selling off of student debt and amongst other things how we can mobilise and link together the various struggles we are seeing in a range of workplaces. UCU members in particular seemed positive and showed no signs of letting up, maintaining that the fight must go on. Despite this, some staff on strike clearly seemed disillusioned with the persistent failure of management to engage with them and spoke about the hardship of taking strike action, especially with union density so low, around 30% for Unison on campus. Overall however, today’s strike showed that the determination of staff to fight for a fairer deal is by no means dwindling, the picket lines were perhaps even busier than the two previous full days of strike action and the support of students can be not only vital in securing the gains they deserve but making the wider political points, this isn’t an isolated situation but represents the ideological attacks by the government on working people due to a crisis of the capitalist system.

Members of the Queen Mary Marxists visited the picket lines outside the Mile End campus to support the staff on strike. Although the picketers were in a good mood (despite the weather!) the turnout appeared to be lower than at the previous strikes. There was also very little student support – partly a result of QMSU’s failure to publicise the strike effectively. The vice-chancellor at Queen Mary earns an astronomical salary and yet staff are taking enormous cuts to pay. We stand in full solidarity with our staff on strike.

Today (6/2/14) members of the KCL Marxist Society went along to the picket line in Kings College for the HE strike.
Although it was great to see and speak to the staff out on strike, it has to be said that the picket line was smaller than previous strikes. Despite the tremendous resolve of the union members on strike, the dispute has from the beginning been characterised by short-sighted and weak leadership. There appears to be no strategy other than to hold one day strikes occasionally. The leadership should make its strategy clear to its membership, giving them confidence to build for the strikes. It should say ‘today we’re going for a 1 day strike. But if we don’t get what we want, it’ll be 2 days next, then 3’ etc. They should encourage all their branches to build and make contact with SUs. Instead nothing is explained and isolated days of action take place. The inevitable effect is declining morale and weaker strikes each time.
Afterwards we went to the London-wide rally in Conway Hall. The mood was one of anger at the appalling way the government and university employers are treating staff. But there was also anger at the complete absence of strategy from the top of the union. As one speaker from the floor commented, the strike campaign has been needlessly dragged out and de-escalated with the 2 hr strikes. Other speakers commented that the correspondence from UCU leadership to the membership was pathetically plaintive, and didn’t even say the aim of the strike was to win, but merely to get the government to reopen negotiations!
It is encouraging to hear that, despite the absence of leadership from the top, the regional leadership in some areas of the country have managed to inspire their membership a little more than they have in London. However it is only on a national level that a dispute like this can be won. It is time for the union leaders to step up or step aside.

Today (6/2/14) the Manchester Marxists  intervened in the joint strike action over pay at the university of Manchester. We helped out on several picket lines, introducing ourselves as being from the Marxist society and were warmly received. Probably the most notable aspect of the day was the huge student participation (bare in mind this is relative as Man Uni has over 40,000 students).  The fact that there was such a positive student response to the strike shows the potential for campaigning and spreading Marxist ideas on campus.

The UCLU Marxists went along to participate in the strike action yesterday (6/2/14). This was the third national day of strike action by Higher Education workers in the last three months, in the wake of two-hour strikes organised by UCU and in the midst of a 48-hour strike by London Underground workers. The heat of workers’ struggle was reflected in a more militant mood around the picket lines at this strike than at previous HE picket lines. The Bartlett faculty at UCL was completely shut down and students in particular seemed now to fully grasp what was going on and why it was happening, with dozens more than before being turned away in solidarity, while the dead calm around campus reflected a decision by many to stay away. What is more, students from Barcelona and Korea noticed the pickets and discussed the respective struggles at their universities back home, before pledging their solidarity with the strike action.

As a result of simultaneous strikes organised by the RMT, the picket lines were noticeably smaller, especially up to rush hour, as staff had problems making it in. UCLU Marxist Society’s presence was also diminished, but we still dominated the pickets, largely outnumbering student union reps and boosting the morale of those on strike with food, hot drinks and our enthusiasm for the fightback. One officer from UCU remarked what a pleasure it was to have the UCLU Marxists on the picket line, and that the striking staff always looked forward to their attendance.

Many staff still broke the strike very dismissively, and some seemed confused claiming that they couldn’t join in as they worked at UCL. If only their right to join a union and withhold their labour was promoted more, they might have understood.

The strike moved on in the afternoon to a protest outside the UCEA building, the headquarters of the bosses’ union, ending with a rally.

Students on the whole, even at a university as outwardly rife with inequality as UCL, now seem to have grasped the scale and the meaning of the fight which their staff are involved in. The recent protests centred on ULU, particularly the cops-off-campus demonstration could well have played a part in this raising of consciousness. However, now is the time for students to stand alongside lecturers and workers at the heart of a battle against austerity. Through supporting the struggles of the working class students are also fighting for themselves.

The focus at UCL, among students and organised workers alike, must be a drive for unionisation on strike. It has been a tactic of the university bosses from the very beginning to pitch one worker against another, research against lecturer, administrator against academic, not to mention the countless outsourced workers on campus. It is an imperative than the majority of the workforce at UCL knows that it has the power to stop the vicious attacks from the Tory government and the bosses on their wages and living standards, and that this power is expressed through organisation; as it stands, this is clearly not the case. But it was encouraging to see security guards come from inside the main gates at UCL to talk to union officers, some even taking membership forms. The push for university workers to join unions must be centralised, with the help of the student union, in order for this campaign of industrial action to be successful, with the bulk of the workforce on board.