On Wednesday 31 March, hundreds of students at Pimlico Academy held a sit-down protest on school grounds. Whilst the event has been presented as a result of a change in uniform policy, a closer look shows a deeper rooted political battle taking place at the school, of which this protest is the culmination.

The protest happened on the back of countless changes, revealing quite clearly the outlook of the school’s leadership. Recognition of the Black Lives Matter movement and Black History Month had been scrapped from the curriculum.

On top of that, the Union Jack flag had been introduced to the hallways and outside the school. This took place with no consultation of staff and students at the school, as all those who voiced disagreement were ignored.

Not only has teaching on oppression been removed, but a larger focus has been placed on the British Monarchy.

As Marxists, we would be happy to see the truth about the monarchy taught in our classrooms. But as we’ve explained elsewhere, it’s unlikely to be taught from a critical viewpoint in our schools.

Our education system is presented as simply a means to help facilitate the growth of students to form their own opinions. But these actions show that education under capitalism is far from neutral. They show in no uncertain terms that the British education system stands in favour of the established order.

Part of the changes imposed by the school management included new uniform policies that directly targeted black and muslim students. These additional rules restricted hairstyles that “block the view of others”, implying afros and natural black hair.

The rules also banned hijabs that are deemed to be “too colourful”. A petition against these rules was swiftly started, and quickly reached over 1,000 signatures.

In response to all these reactionary changes, hundreds of students took action against the new measures, with a sit-down protest in the school grounds. Students carried placards saying “Black Lives Matter”.

Graffiti was added to school walls and areas outside of the school grounds, that labelled the school as racist and called for the head teacher to be sacked. Slogans were featured such as ‘Ain’t no black in the union jack…’ and ‘Pimlico Academy run by racists…for profit’.

This protest demonstrates how politicised young people have become. It all goes to show that students are no longer willing to passively accept ideas which do not correspond to the reality of oppression and exploitation that they experience in their lives.

We can also see that students are prepared to take matters into their own hands, to demand an end to the rotten status quo.

For young people, there is a growing understanding that things do not need to stay like this. This leaves the establishment in a dangerous position. In trying to clamp down on this mood they end up adding more fuel to the flames.

So angry were some students against the new school changes, that they removed and subsequently burned the Union Jack that had been placed outside the school. This doesn’t leave much room for speculation about the opinions held by these students on ‘patriotism’.

Thirty members of staff are due to leave by the end of the school year, as they no longer feel comfortable working in this environment. This shows how detached the new school leadership has become from students and staff.

The restructuring of the history course – to replace the tiny amount of education on minority groups with further propaganda on the British monarchy – is reflective of the flag waving ‘culture war’ the Tories are trying to promote.

The reality is that if people really knew the true history of the British Empire – and the monarchy at its head – they would not line up in support of it. The youth are clearly demonstrating this fact! If there was no threat to the establishment, there would be no reason for suppression.

The students at Pimlico College won their battle, with the college agreeing to all of their demands. The lesson here is that militancy pays.

However, this is not the end of the struggle against oppression. The establishment is frightened of what is to come. And so they should be! Students and workers must unite in militant action against all oppression and exploitation. Pimlico College students have shown the way forward. 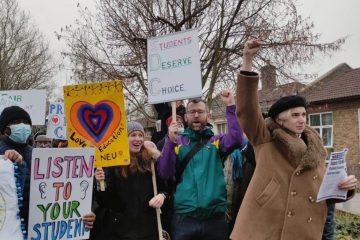