Pay or principles – why run as a student union representative?

With the student elections at QMUL fast approaching, adverts have begun appearing around campus encouraging people to run for a position as a student representative.

The situation faced by students today is a difficult one. We are paying £9,000 fees and racking up enormous debts, despite the graduate job market looking increasingly crowded and poorly paid. Many of us are living in poor quality housing managed by parasitic landlords whose contempt for students is clear. The cost of living in London is rising rapidly but our loans and bursaries are not keeping pace. Many of us have to take on jobs at the same time as studying which leaves us little time for our academic study. These jobs are often on zero-hours contracts and in poor working conditions.

For these reasons the position of student representative is extremely important. We need leaders of our student union who are willing to stand up to the University to demand decent teaching standards and facilities; and to stand up to landlords who rip students off with poor quality housing; and to stand up to those who employ students in unacceptable conditions. We need leaders who are motivated and determined, with clear ideas of how they’re going to defend students who are preparing to enter the real world in the midst of the deepest crisis of capitalism in history.

This is why the union’s advertising campaign for these elections is so scandalous: a full page advert in The Print encourages people to run for election on the basis that they will earn £24,500 if they win. Nothing about the importance of fighting in the interests of students or about the political role of the union is even hinted at. 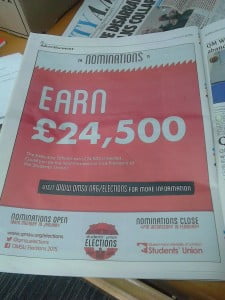 By encouraging people to run for leadership of the student union on the basis of how much they’ll earn if they win, you are guaranteed to attract only budding careerist politicians and mediocre bureaucrats. If the salary is the most important part of the job of student union leader, you can be sure that it will be those most devoid of any principles or real ideas who will fight hardest to win. How can we rely on someone, whose focus is keeping their fairly large salary, to stand up for us in the face of powerful forces like the university, landlords and employers?

The role of any student representative in an SU is a serious political one. It seems that the leaders of the union at present, those who have initiated this appalling advertising campaign, have forgotten that, or perhaps never knew it in the first place. It is up to those of us at Queen Mary who are serious about fighting for students, on all the fronts we have to face, to get stuck in to politics on campus and beyond. This is the role of the Marxist Society on campus and the Marxist Student Federation nationally – because it’s socialist principles that can guide our fight for a better standard of living, studying and working.