Next week the annual conference of the National Union of Students will take place in Glasgow. This conference comes off the back of the biggest struggle by the UCU on our campuses in the history of that union. This has been coupled with a wave of student solidarity with staff striking in defence of their pensions. In this context the conference should be an opportunity for students to discuss the UCU struggle, how students can support staff and win the dispute, and also how it can be built upon and strengthened as the spearhead of a fightback against attacks on education, and on public services in general, and how it can be used as the spark for a movement to bring down the Tory government.

Unfortunately, the official agenda for the conference doesn’t look particularly promising from this point of view. This isn’t surprising since at last year’s conference almost every major position was won by people who are less interested in radical campaigning in defence of student interests, and more interested in reviews, reports, obscure committee meetings, and their own media appearances. However, in amongst the various obscure technicalities being discussed at the conference, a couple of more important political questions will arise which will define the political character of this year’s conference. 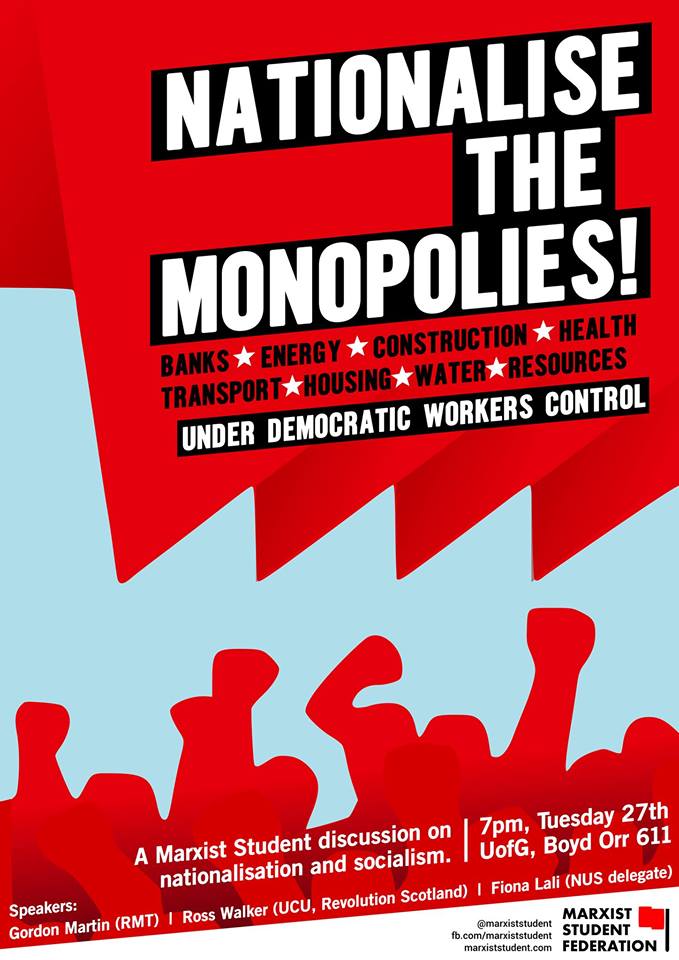 For example, motion SC104b is titled NUS Supports the UCU Strike. This motion is on the key issue of the UCU strikes, which represent the best opportunity we have had for many years to build a serious struggle in defence of education. As well as offering practical support for the strike, the motion also develops the political arguments involved with the strikes and, crucially, includes a point that would commit the NUS to calling for:

“the nationalisation under democratic control of the banks and biggest businesses as the only way to secure decent pay and conditions for university staff, decent and free education for all, and properly funded public services”

Such a demand would put the NUS, alongside the UCU, at the forefront of the struggle against the Tory government, and against an economic system whose logic leads inevitably to cuts and austerity. It’s essential that this motion be passed by the conference.

Another important motion is SC113 which deals with the KCL Justice for Cleaners dispute. It highlights the crucial question of student/worker solidarity. If this motion were to pass and the NUS were to put its significant resources and authority behind the struggles of outsourced workers at our universities this would strike powerful blows against the marketisation model of university management. It needs to be part of an overall strategy to build a united front of students and workers to kick capitalism out of education.

As well as participating in the conference, Marxist students will be attending the Glasgow Marxists event on Tuesday 27 March at 7pm in the Boyd Orr room of the University of Glasgow. The meeting will be to discuss the question of nationalisation and workers control. This question has a burning relevance to universities as well as to all the major sectors of the economy. The question of public ownership is back on the agenda in British politics. Gordon Martin of the RMT will be speaking at the event, as will Ross Walker of the UCU and Fiona Lali as a delegate from the NUS conference.

Throughout the conference there will be plenty of opportunity to discuss radical politics, even if that isn’t always on the conference floor. Just look out for the Marxist students who will be selling their Revolution paper. Together we can discuss what opportunities there are for us to score important victories for radical, socialist politics at the conference this year and how we can seize them.