No to racism – fight for socialism!

This Saturday the Marxist Student Federation marched alongside 20,000 people in London, Glasgow and Cardiff, to show the British and European governments that we reject their appalling handling of the refugee crisis. Thousands of ordinary people took to the streets to declare their rejection of racism and how it is being used by the ruling class and far right groups to try to divide the people. This rally happens every year, however this year was much bigger than the last, showing how people are becoming more and more sceptical of the media lies painting all Muslims as ‘terrorists’ and all refugees as ‘scroungers’ and ‘criminals’. We know that people are people, and although borders are erected to divide us, we have more in common with ordinary people in other countries, than we do with our own ruling class. This solidarity was clear on the marches, where the crowd often erupted into crying ‘refugees are welcome here’, or ‘no borders, no nations, stop deportations!’ 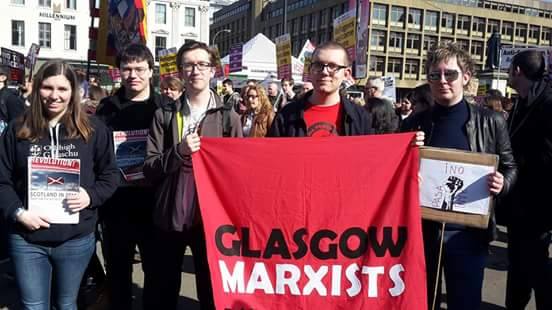 Our comrades on the demo in Glasgow

The following is the text from a leaflet we distributed on the demonstrations:

The Marxist Student Federation believe that these isles belong to all who wish to live here. We campaign for an end to all immigration controls. Immigration controls by their very nature are divisive and serve to create artificial tensions between local born and foreign people. Whether escaping war, oppression or economic hardship, we say refugees and immigrants are welcome here.

Many foreign born workers are at the mercy of exploitative employment agencies, are forced to work zero hour contracts and other forms of casual non-unionised work. We believe the trade unions have a duty to organise this heavily exploited layer of the workforce. Migrants and refugees can play a vital part in the fight against poverty, exploitation and capitalism. We commend the work of the International Workers of Great Britain and United Voices of the World in organising migrant workers in London and supporting them in their fight for full trade union recognition. The National Union of Journalists along with Unite print workers branches and other unions associated with the media must launch a campaign against the relentless anti refugee and xenophobic media including fully backing any refusals to follow the right wing editorial lines.

Marxists reject islamaphobia, anti-semitism, and all religious intolerance. We hold a scientific and materialist view of the world, however we also believe in the unity of the oppressed of all religions and none. We therefore fight for the right of religious people to practice their faith safely and without fear of persecution.

The British state is soaked with a bloody history of imperialism. The majority of migrants and refugees flee countries which have fallen victim at some point to Britain’s political empire or current foreign military and economic policies. Marxist Students are proudly unpatriotic. We believe that British workers and poor have more in common with our foreign workers and poor than we have with our own state and ruling class. We welcome all refugees from Syria, Iraq, Afghanistan and elsewhere.

Currently there is more than £750bn sat idly in the banks of big businesses whilst productivity sits at less than 2/3 of its potential. We fight for a socialist revolution, so that the resources of this land can be controlled and planned democratically by those who actually create the wealth, giving access to housing and a living wage jobs, trade union rights and participation for all.