Militancy on picket lines and at student unions in London

Report from the student union AGM at Queen Mary

Out delegation from the Marxist society has attended the picket lines in the mornings and the mood was good.

Yesterday evening there was a 5:30pm gathering in the bar for supporters of two motions that had been submitted to the SU AGM in support of the strike, and to lobby the university to protect grades during the strike. The motions were good and we supported them. We raised points about why we think the strike needs to be linked to the fight against capitalism as a whole, which seemed to go down quite well

The AGM started at 6:30pm and about 179 people turned up at the start, well exceeding the 120 needed for quorum. We tried to stick the QM Marxists banner up at the front but were prevented from doing so by the SU as some individuals in the room “may not actually support the strike”!

The first half an hour was the usual uninspiring student politics, with speeches on changing building names, and even removing commas from the university name! All this discussion on non-issues was clearly getting to the crowd and people started heckling the speakers.

As soon as this section was over, the Annual Members’ Meeting section began, which contained the motions and amendments, but only after a series of speeches from the individuals running for SU positions. At this point we immediately proposed a procedural amendment to move straight to the motions, which was voted on and passed with overwhelming support. One individual tried to protest this decision but several people pointed out that there were more pressing issues at hand.

The motion in favour of the strike was presented and discussed, although unfortunately time for discussion was curtailed by the chair. Had we had the chance to speak we would have posed the issue of fundamentally changing society to guarantee basic rights like pensions, by funding free education and staff wages with the uninvested capital lying in bank accounts, obtained by nationalising all industry without compensation.

A lone Tory got up to speak against the motion and ended up being heckled and laughed at. In a similar vein someone made an odd proposal that if the motions pass, they not be considered explicitly “political” as it may damage union representatives credibility. How these motions can be considered apolitical is anyone’s guess. This is a political issue and students are entitled to take a political stance.

Happily, both motions passed with strong majorities in the end. We’ll be sure to be back on the picket lines with a renewed confidence that this strike can continue to gather momentum and be won. 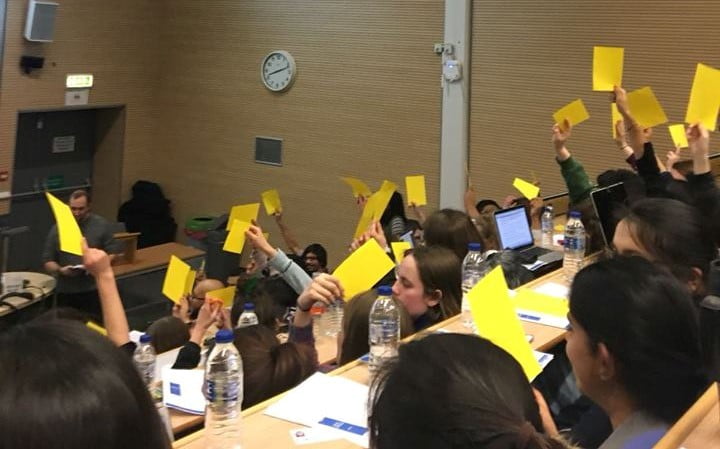 Report from the picket line at KCL

Yesterday marked the second day King’s College London staff and students have been braving the cold, and the frosty attitude of management, in the ongoing UCU strike. It marked the second day of fourteen, in which Marxist students are fighting not just to secure fair pensions for our teachers, but also a more humane academic system for all of us. Academics and students alike share an understanding of the importance of their task – if UUK and the government get away with this, there is no limits to how far they can push the commodification of our education sector.

Turnout on the picket lines was an improvement over Monday, with around 30 lecturers and students already having gathered by 11am, when KCL Marxist Society secretary and UCU activist Joe Attard gave a stirring speech connecting this attack on pensions with the crisis of capitalism as a whole, showing there was only one way forward – revolution! During a Shut Down KCL rally at 12 noon, the pavement in front of Strand campus filled with more than 200 cleaners (in dispute over outsourcing), lecturers, and students, as we stood together in a show of strength and demanded the university take notice.

KCL Provost and Senior Vice President for Arts and Sciences Evelyn Welch herself thought it necessary to leave her cozy office and demand more orderly conduct. This is clearly a sign that university management is rattled by the strength of our action, and as this strike continues, our message is clear: you can have your order, when staff have their pensions secured! Management are on edge, if we stand together, we can bring them to their knees!

Students and workers, unite and fight!