The Marxist Student Federation is ready to support all workers on strike over this period. Marxist societies up and down the country will be at the picket lines from this morning onward.

We will be on the picket lines, supporting our staff and we encourage all of our fellow students to do the same.

Picket lines will be running from 6am-1pm in the following locations:

We will be picketing the Foundation Building with Comrades from University of Liverpool but if you’re unsure where you would be most helpful you can head to the UCU office in 20 Oxford Street.

Over 100 staff and students crammed into a lecture room to attend the Birmingham UCU general meeting for the planned strike action. Attendees were taken aback by the size of the meeting as shown by the exclamations of pleasant surprise from late comers as they squeezed through the door. The union officers reminded us why we are striking: the shambolic University Superannuation Scheme (USS) pension proposals, the gender pay gap and the “voluntary” unpaid overwork that academic staff were expected to carry out (a Birmingham UCU survey found the average staff member worked 50-60 hours a week).

Birmingham is particularly notable in these strikes as our Vice Chancellor, David Eastwood, is the very same man as the chair of the USS itself! As one UCU officer pointed out, like some of us in these hard times, he needs multiple jobs to get by. Birmingham missed the required ballot threshold for strike action in the 2018 UCU strikes but this time with a 58 % turnout, 82 % voted for strike action to defend pensions.

The meeting displayed a fiery determination from the lecturers who discussed and supported bold strike action tactics. We were told that after long but amicable negotiations between the students’ guild and UCU, the student guild had suddenly turned around and refused to hold teach-outs in the guild building. Furthermore, the student guild then booked out all the guild rooms so that they couldn’t be booked by individual UCU members. One voice from the floor said that this was no problem and they’d be quite happy to host the teach-outs outdoors pointing out that when they were at a London university during the 2018 strikes they’d hosted teach-outs in the snow. Other contributions from the floor pointed out the need to link up with the CWU strike action (the meeting occurred before the CWU lost the court case against Royal Mail) and how as the last strike action before the general election, the UCU needed to show the need for and passionately build up support for a Labour government. There was a large call for the UCU and individual members to communicate with students and get them onboard rather than alienate them with the strike action.

Birmingham Marxist Society has already pledged support to the striking workers and will be with them on the picket line.

In Warwick university we built off our connections within the union to organise a solidarity meeting for the strike whilst the vote was ongoing. We had a panel of students and staff to discuss why the strike was happening nationally, the situation in Warwick university itself which saw 70% of contact hours for students performed by causualised staff and analysis of the wider political and economic situation.

The discussion focused specifically on what students could do. We emphasised the needs for Student support at the picket lines on a mass basis and this would need a campaign to educate students on the issues, with most being unaware. The move was taken to work with other left wing societies on campus to reorganise the student staff solidarity committee and campaign to educate students on the issues.

We’ll be joining the pickets across campus because their fight is linked to our fight against tuition fees, cuts to mental health services and precarious contracts.

Lecturers are increasingly exploited in the workplace through low pay, poor pensions, increasing workloads and short-term contracts. This impacts workers AND students. We pay huge amounts to get a degree yet our lecturers are seeing their material conditions decline. Why is this?

It’s because of the pernicious marketisation and casualisation of workers and students in our universities. We support our lecturers’ struggle and will be supporting them on the pickets. 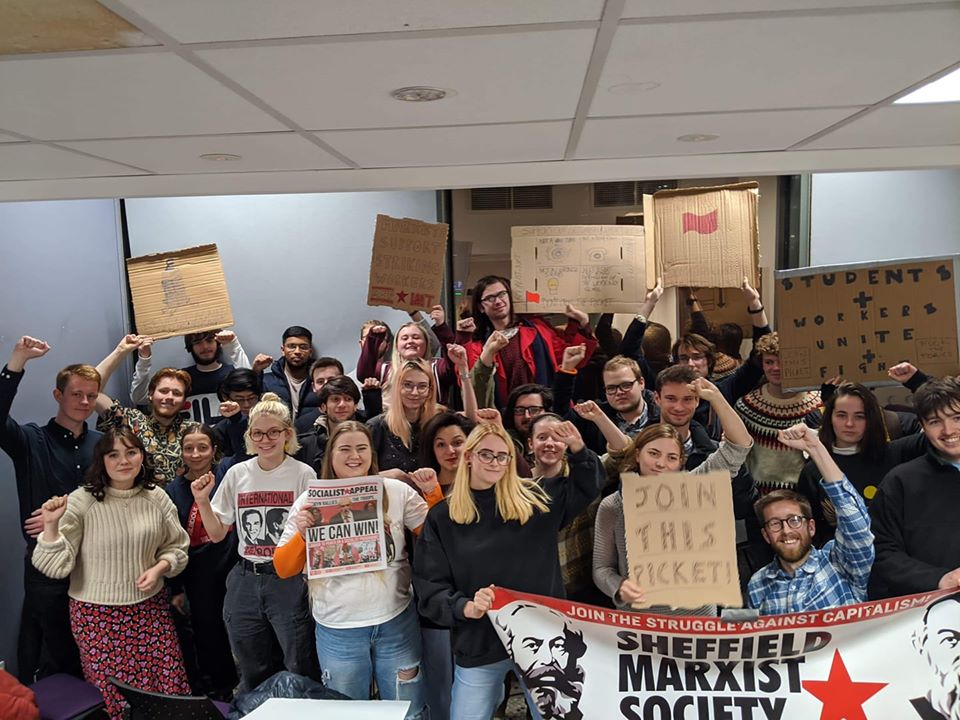