Published by Marxist Student on February 25, 2022

As part of the national UCU strike, UCU London region organised a rally and demo starting at Tavistock Square on Tuesday afternoon.

Over 400 UCU members and students gathered to protest for fair and equal pay, an end to pension robbery, manageable workloads, and call for the end of casualisation.

To kick off the protest, a number of speeches were made by UCU members, trade unionists and students.

Paul Holmes, National President of Unison, spoke. Despite the rain and wind, his speech enthused and motivated the crowd. “Somebody wants your terms and conditions, your pay, your pension, to enhance their lifestyle!” Paul said to cheers.

Another speaker at the demo said, “They know the cost of education, but not the value of education,” later chanted by protestors on the streets of London.

A member of staff from Great Ormond Street Hospital, organised with United Voices of the World, gathered the most amount of applause. Her words addressed how BAME and women workers are treated with contempt – an issue the UCU is also fighting, against the gender and ethnic pay gap that exists in Higher Education, as elsewhere.

“It’s not the management making the decisions, it’s us who make the university run” Tori said, highlighting the need for workers control in Higher Education.

Zara Dinnen from Queen Mary University of London gave an informative speech about the situation at Queen Mary.

As a result, QMUL UCU members and lecturers have opened a local dispute and voted to ballot for further industrial action.

This kind of militant response is exactly what’s required when the bosses attack. But all staff face similar threats. As such this must be fought at a national level, not through local battles.

After the rally, a march set off from Tavistock Square to the USS office, and then from the USS office to the Bank of England. Marchers chanted slogans of unity, and solidarity.

The slogan, “Workers and students, unite and fight,” turned into a song with the accompaniment of the drums and bells from the back of the march, along with passing buses who honked in solidarity. Megaphones and marchers roared, “The workers united will never be defeated.”

Bystanders showed solidarity throughout. Flags were being waved from windows in solidarity, passer-bys danced to the rhythm of the chants, and shop owners and workers clapped in unison to the march.

At the first stop, in front of the USS office, the march cornered the building with colorful banners. Speakers passed the megaphone from one to the other and gave speeches about USS.

There was a choir of ‘boo’s as a reaction to the attacks by university bosses: the pension robberies, the 3,000 university staff that have been dismissed during the pandemic, the ultimatums given to the worker regarding working hours.

Chants serenaded the march: “Whose university?” “Our university!” “Whose education?” “Our education!”

At the Bank of England, banners from Unison, UCU, universities, and the Marxist Student Federation filled in the gaps between the pillars of the building, and the crowd gathered for some final speeches. These called for democracy in educational institutions, to value education and the educator before profit.

The mood of the rally and march was certainly a fighting one. But many members recognised there is a vital need for escalating strike action, with 2 speakers closing the rally calling for indefinite strike action.

The mood and determination is clearly there. UCU leadership must now match this and adopt a strategy of indefinite strike action, along with building for coordinated action with other education unions nationally. Only by escalating the action will they succeed. 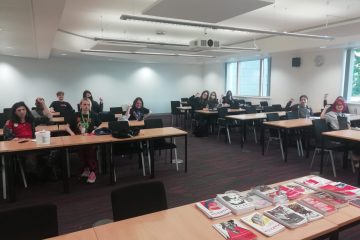