Jhon Guerra from the Venezuelan embassy in the UK and Jorge Martín from the Hands Off Venezuela campaign addressed a meeting in London to discuss the forthcoming municipal elections and the on-going economic war against the Bolivarian revolution.

The meeting, hosted by the Marxist Student Federation, opened with a screening of “Carbon Copy”, the new ViveTV documentary on the campaign of sabotage, speculation, overpricing, hoarding, etc conducted by the oligarchy against the revolution.

The film features Eduardo Samán, president of Indepabis, the Venezuelan state body defending consumer rights and charged with the struggle to make sure working people have access to basic goods at fair prices. The documentary makes an apt comparison of the current conflict in Venezuela with the campaign of destabilisation against the Allende government in Chile in 1971-73 which finally led to the coup and its overthrow.

When asked about the danger of “polarisation” in Venezuelan society, Samán correctly replies that there had always been polarisation between the workers and the capitalists, what has changed now is that working people have become aware, conscious and organised. He welcomes this so-called “polarisation” “as the exploited are many and the exploiters are few”, he says. 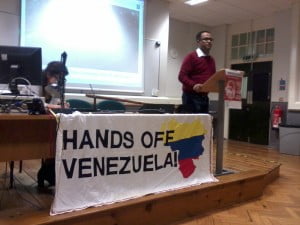 After the film, the debate was opened by Jhon Guerra, second secretary of the Embassy of the Bolivarian Republic of Venezuela in the UK, who explained the importance of the December 8 municipal elections and the context of the economic war of sabotage being waged against the revolution.

Jorge Martín from the Hands Off Venezuela campaign opened his contribution by explaining how the campaign of sabotage had intensified in the run up to the elections. On Tuesday, he said, there was a power blackout just as President Maduro was announcing a series of measures to fight against this economic war.

Jorge explained how president Maduro has identified clearly Fedecamaras, Consecomercio and Venamcham (the country’s three main bosses organisations) as being responsible for this economic war. The struggle against sabotage has mobilised not only the state institutions but also worker and revolutionary activists and rank and file organisations which have taken part in overseeing and controlling production, distribution, the sale of products at regulated prices, etc. This whole battle has had the effect of galvanising, once again, the revolutionary energy of the Venezuelan people. 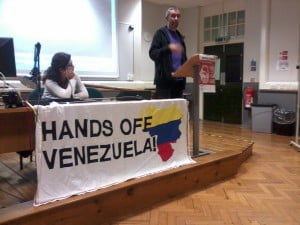 Jorge Martin added that in his opinion, the economic problems facing the Bolivarian revolution are in part caused by a deliberate attempt to overthrow the revolution on the part of the capitalists, but also as a result of the rebellion of the productive forces againts the attempts of the government to regulate the functioning of the capitalist system. Jorge explained how price controls, foreign exchange controls, etc were introduced, particularly after the defeat of the bosses lock out in 2003, in order to safe guard the interests of working people in having access to basic food products and in order to prevent the flight of capital. However, the capitalists have found ways, legal and illegal, to go around these regulations, and when they have been unable to break or bend them, they have resorted to a strike of capital.

In his opinion the only way forward is to expropriate the oligarchy and introduce democratic planning of the economy under workers’ control. He quoted the example of 19th century Venezuelan revolutionary Ezequiel Zamora who famously said that “those who should be expropriated are the oligarchy – they should be left with nothing but their shirts, because with their wealth they wage a war against the people”.

Jorge said that there are, in his opinion, three challenges facing the Venezuelan revolution: the expropriation of the oligarchy and the abolition of capitalism, the destruction of the old bourgeois state to be replaced by new revolutionary institutions based on the workers’ councils and the communes, and finally the question of revolutionary leadership.

A wide ranging debate then opened with many contributions and questions from the audience. There were questions about the need to organise the solidarity and counter the lies of the media, about the fact that the struggle in Venezuela was not just a national struggle against imperialism but also had a class content, about why the ministry of labour was not always responding promptly to the demands of groups of workers occupying factories and many more.

There were some opposition supporters who also spoke to paint a picture of chaos and destruction (burning refineries, collapse in oil production, the spectre of Zimbabwe, corruption, crime). Many of their points were straight lies (such as the allegation that a factory making TV sets had been nationalised so that TVs would be given away to the people for free), others were gross exaggerations and they were answered by Jhon Guerra and Jorge Martín.

But the most scandalous point they made was that, at the end of the day, the government was, somehow, to blame for the black market in dollars and the speculation and overpricing which resulted from it! As one of them said “opportunity makes the thief” and that capitalists were just acting in their own self-interest. Jorge Martin replied that in a certain sense this was true, if there were no foreign exchange controls there would be no black market, but that would lead immediately to a massive flight of capital. Why? Because there is a revolution in Venezuela and the capitalists do not think their money is safe there. So, following the logic of these opposition supporters, we should stop the revolution altogether in order to prevent the flight of capital. That would be very good … from the point of view of the self interest of the capitalists! But it would lead to the abolition of all of the social gains of the revolution (free universal health care, eradication of illiteracy, massive expansion of free higher education, the housing program, etc). There is only one conclusion that can be drawn from this: capitalists act in their own self-interest, but it just so happens that their self-interest is in direct contradiction with the general interests of the overwhelming majority of working people of Venezuela, who have repeatedly said very clearly that they back the revolution and want to go towards socialism. It comes down to a question of which side you are on, Jorge said, “and we are firmly on the side of the Bolivarian people and their revolution against the parasitical bourgeoisie and imperialism”.