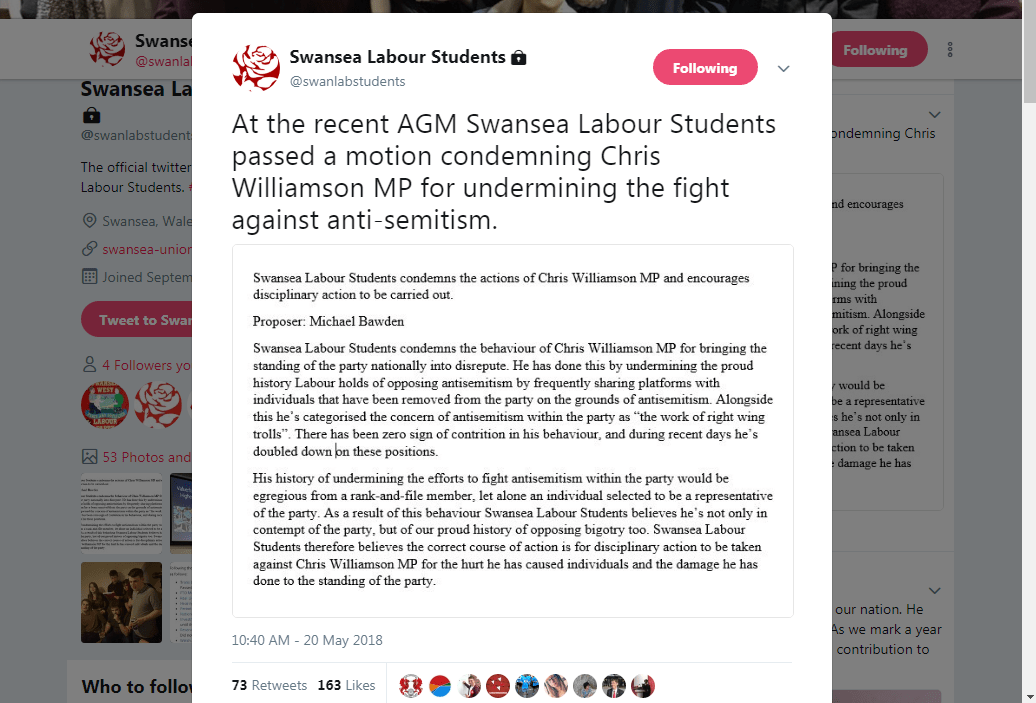 Blairite cliques are still in control of a sizable number of Labour Student societies across the country. In Chester, Swansea and Hull these societies have released statements calling for disciplinary action against the left-wing Labour MP Chris Williamson. The statements gloss over, in vague terms, the exact wrongdoing against which disciplinary action is being demanded. But it is clear that these societies are responding to Chris Williamson’s defence of Marc Wadsworth, who was recently expelled from the Labour Party on the basis of false allegations of anti-Semitism. This shameful witch-hunt reveals the clear divide inside the Labour Party, between the marvelous mass movement of workers and youth around Corbyn which aspires to a fundamental change in society, and tiny groups of councillors, party bureaucrats and their sycophants, whose only aspirations are to bolster their CVs and create comfortable careers on the back of the labour movement.

It is not accidental that during periods of upswing for the mass movement around Corbyn, such as during leadership or election campaigns, Blairite smears have been elbowed to the side and ignored by all that is healthy and radical in the Corbyn movement. This is because the Blairite saboteurs are nothing but a hangover from the past. They have nothing in common with the mass movement of workers and youth who consistently rally around Corbyn’s bold programme, and their attempts to undermine it fall on deaf ears.
However, during a relative ebb in the movement, the Blairites seize the chance to openly join hands with the establishment and its mouthpieces in the press, and fully expose themselves as the fiercest enemies of the labour movement. We have seen this behaviour in the latest round of witch-hunts against Labour left-wingers on trumped up allegations of anti-Semitism and bigotry. Recently, they launched a scurrilous attack on Chris Williamson MP in this way, accusing him of “bringing the party into disrepute” and demanding disciplinary action.

The case of Marc Wadsworth

What was the basis for this attack on Williamson? Marc Wadsworth, an anti-racist campaigner, was recently expelled from Labour for suggesting that the right-wing Labour MP Ruth Smeeth works “hand-in-hand” with a right-wing newspaper. In response, Smeeth used her Jewish identity to accuse Wadsworth of anti-Semitism. Williamson’s defence of Wadsworth is the excuse for the Blairite attacks against him.

Ruth Smeeth claimed that she had been “verbally attacked” by a “Jeremy Corbyn supporter who used traditional anti-Semitic slurs to attack me for being part of a ‘media conspiracy.’” What Wadsworth actually said in his “verbal attack” was: “I saw that the Telegraph handed a copy of a press release to Ruth Smeeth MP, so you can see who’s working hand in hand”. How Wadsworth’s comments warrant expulsion on any grounds, let alone of anti-Semitism is anyone’s guess. There’s nothing new in Blairites cooperating with right-wing papers to smear the labour movement. Chris Williamson, along with other MPs such as Clive Lewis, has been present at Wadsworth’s hearings to present evidence against his expulsion. Clive Lewis MP said the following: “I’ve known him [Wadsworth] for 20 years. He’s an anti-racist campaigner. I watched that video and I don’t think that warranted being expelled from Labour”.

Hypocrisy of the Blairites
The vagueness of the statements released by these Labour Student societies, as well as the locking down of the official Twitter account of Swansea Labour Students following the release of their statement speaks volumes about how confident they are in the substance of this trumped up allegation. They don’t dare to make concrete allegations, nor will they allow any direct public questioning of their decision.

Needless to say, there were no statements and condemnations from the Labour right-wing when past “moderate” leaders of the Labour Party decided to argue for “controls on immigration”. Nor when Labour leaders joined in with murderous US and NATO imperialist campaigns throughout the world. With these policies, past Labour leaders stood shoulder to shoulder with the Tories. They relied on racism, Islamophobia, and other reactionary ideas to justify and fuel these policies. And not once did these Labour right-wingers, who are attacking Chris Williamson today, raise any protest against this.

This hypocrisy of the “moderate” wing of the party, and their continuous betrayals of the working class in Parliament and in local councils, have brought the Labour Party into disrepute hundreds of times over. They have, over the years, lost millions of Labour voters and supporters. Yet not a whisper of condemnation is uttered by these Labour Student societies against Tony Blair and other gangsters of his ilk. Such is the consistency of their fight against “disrepute on national level” and their “proud history of fighting bigotry” that they claim in their statements.

This is a battle of Left against Right

In reality these people don’t care about fighting bigotry. They are using the lowest smears and gutter politics, shoulder to shoulder with the Tories and the capitalist press, as a political weapon against the Left. Now, as in the past, by trying to appear respectable to the Tories and the press, they are losing the respect of the working class backbone of the Party. Ultimately, in their background and outlook, the Blairites have more in common with the former than the latter.

We must call these attacks out for what they are: sabotage by the right-wing. Not one shred of evidence can be presented to show that the Corbyn movement is anything other than the most honest defender of all oppressed people in society. A YouGov poll conclusively showed that anti-Semitic attitudes within the Labour Party have in fact drastically decreased. Naturally, other parties which were found to have a much more serious problem with anti-Semitism and other forms of bigotry are ignored. When Jewish groups come to the defence of Corbyn they are dismissed as “the wrong type of Jew”.

Through all of this the careerists and bureaucrats reveal themselves fully. Fighting racism and bigotry does not concern them. Instead they use it as a weapon in a rabid campaign against anyone who dares to challenge the establishment. The Blairites, as establishment defenders of the free market and the capitalist system, are defending the very system which is the source of racial and all other oppression. It is the Labour Right, not the Left, who stand in the way of equality, tolerance, and an end to oppression.