Last year saw an upsurge in the class struggle in countries such as Kazakhstan, Iran, Sri Lanka, China, and Indonesia. Locally, there have been unprecedented strike waves in the United Kingdom in response to the cost-of-living crisis.

For these movements, the fundamental question is whether the working class will limit themselves to the restoration and development of liberal (bourgeois) democracy while maintaining capitalism or whether they will have to go beyond that and bring socialist demands against their ruling classes.

This was the same question posed to Russian revolutionaries over 100 years ago and decisively answered by Trotsky’s theory of Permanent Revolution.

The European bourgeoisie played a revolutionary role up to the 19th century. This bourgeoisie had the objective task of sweeping away the feudal regime and absolute monarchies and, in its place, bringing agrarian reform and a bourgeois republic with a democracy, all of this to strengthen industry, expand their markets and consolidate their political power.

At the turn of the 20th century, Russia was built on a poorer and more primitive economic foundation compared to Western Europe, where countries like England, France and Germany had fully established capitalism. Due to this external pressure, the Tsarist regime intervened to create industry and the state grew to monstrous proportions, consuming a considerable part of the surplus produce.

This had the effect of inhibiting the growth of the population and the development of productive forces. Forced to compete with Western Europe, Russia opened its doors to foreign investments. All these conditions produced a weak national bourgeoisie.

In 1905, Russia was a semi-feudal backward country ruled by a dictatorial monarchy. The working class numbered less than 5% of the population, and the majority were peasants living in rural and underdeveloped areas of the country.

At this time, Trotsky was the lone voice advocating for the Permanent Revolution and even published his theoretical development in a book titled “Results and Prospects”.

Trotsky explained that in less developed countries, especially in colonial and semi-colonial countries, where the bourgeois class is too weak to carry out a revolution, the theory of the 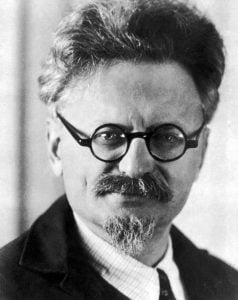 Permanent Revolution indicates the complete and genuine attainment of democracy and national emancipation, is only achievable through establishing a workers’ state. This is due to weakness of the bourgeoisie in imperialised and subjugated countries – subordinate to imperialist capital, tied to the landowners, and unable to establish their own markets.

Basic demands of the workers for peace, bread and land cannot be delivered by the bourgeoisie and must be conquered on the basis of a planned economy.

He clarified that this democratic revolution requires an alliance between the proletariat and the peasantry, which can only be realised through the irreconcilable struggle against the force of the national-liberal bourgeoisie.

Role of the Peasantry

The peasantry is the group most deprived of independent political initiative – restricted for centuries, poverty-stricken and under the old and new methods of exploitation. For this reason, the peasantry can be a rich source of revolutionary strength, but even the most revolutionary peasants are primarily concerned with land reforms and, as a whole, are unorganised, scattered, and isolated from the nerve centres of politics and culture.

Where the working class creates value with the labour power and can withhold this as leverage in strikes and revolution, the peasantry lacks this due to their relationship to the means of production and therefore cannot play a role as an independent class in the revolution.

Trotsky observed that, regardless of the early stages of a revolution in any individual country, the revolutionary alliance between the proletariat and the peasantry will only be actualised under the political leadership of the most advanced workers organised in its Communist Party.

The conquest of power by the proletariat signifies merely the beginning of a revolution. The proletariat, as the leader of the democratic revolution, will quickly be confronted by the barrier of private property and be compelled to sweep it away.

Here, the democratic revolution will evolve directly into the socialist revolution, becoming a permanent revolution. Rather than perpetual war, the Permanent Revolution is a recognition that the revolutionary proletariat can only achieve its goals through socialism and will, therefore, consistently push for it.

This revolution cannot be contained within the borders of a single country. Trotsky asserted that although the socialist revolution will begin in the national arena, it will unfold and be completed in the world arena. This is absolutely necessary, especially for less developed countries.

The Bolshevik perspective for a socialist Russia was predicated on the success of the German revolution. They depended on the more advanced capitalist countries to overthrow capitalism to support the economic development of the less developed countries such as Russia. Lenin even said that he would have sacrificed the Russian revolution for the success of the German revolution because, as an advanced capitalist nation, it would have played a much more pivotal role in the global revolution.

The failure of the German Revolution isolated the Soviet state and gave impetus to its degeneration into Stalinism.

In 1904, there was a serious debate over the fundamental question of which class would lead the Russian Revolution. The Mensheviks took the view that the revolution would be bourgeois and, therefore, that power would have to be transferred to the capitalist class and the task was to create the conditions for bourgeois parliamentarism.

In contrast the Bolsheviks, under the guidance of Lenin, while recognising the inescapable bourgeois character of the revolution, put forward the task of establishing a democratic republic led by the proletariat and the peasantry. 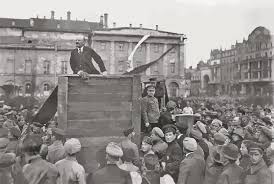 After the February Revolution of 1917, the Provisional Government emerged as a bourgeois attempt to exert control over the masses. The Mensheviks decided to stand with this government in accordance with their two-stage theory of revolution, which states that a country has to go through a bourgeois revolution (led by the national capitalists) before it can have a socialist revolution. Under the influence of Stalin, elements in the Bolsheviks were beginning to bow to pressure, and follow the same two-stage theory as the Mensheviks.

On the other hand, Lenin was a vocal dissident and spoke out against putting faith in the Provisional Government. He returned to Russia to make his position abundantly clear: that the revolution had to be one of independent class struggle, as the Russian bourgeoisie was tied to international capitalists and landlords and would represent their interests.

Events proved Lenin and the Bolsheviks right; the Provisional Government failed to deliver bourgeois democratic demands, their ties to the weak Russian bourgeoisie prevented them from breaking with the landowners or imperialist capital.

This was when Lenin put forward the slogan of “Peace, Bread and Land”. Although he knew that the slogan was bourgeois in nature, it plainly demonstrated the inability of the Provisional Government to solve fundamental problems of land reform, the disastrous war and access to food.

Instead, only the working class would be able to provide and eventually go further than bourgeois reforms to protect the gains of the people.

The October Revolution of 1917 saw power transferred from the inept Provisional Government to the proletariat of Russia in the Soviets (workers councils) so that issues fought for during the February Revolution could be fully realised.

116 years since Trotsky wrote Results and Prospects, this debate has been resolved by history. The Russian Revolution followed the path which Trotsky had elucidated 10 years before. If the Stalinist and Menshevik theory of stages was correct, then the October Revolution would never have happened.

Despite the conservatism of Stalin and Kamenev, the real process of events revealed that the bourgeois democratic tasks existing in Russia could only be carried through by working class ascendancy.

This was Lenin’s view. If it had not been, he would not have returned to Russia to fight against any suggestion within the Bolsheviks to support the Provisional Government.

After Lenin’s death, the Stalinist bureaucracy, which led to the degeneration of the workers’ state, turned inwards and adopted the policy of ‘Socialism in One Country’ to consolidate its power. This was a disastrous move that led to the destruction of the international revolution, saw the deaths of many revolutionaries, and restricted the development of socialism globally.

No serious Marxist believes in socialism in one country. The development of the world market and global companies means that the crisis of capitalism is globalised; no single country can escape this crushing reality. We fight against imperialism and for the liberation of proletarians everywhere, calling on international support and solidarity.

As genuine Marxists, we are inherently internationalists, and our call is for workers of the world to unite!