Flares and fighting spirit at UCL demo against TEF

A demo was held at UCL on Tuesday to protest the government’s impending Higher Education reforms. Under the slogan “Grants not debt”, a group of students, union officials, and activists voiced their discontent across the campus with the direction in which our university system is heading. The ‘Teaching Excellence Framework’ (TEF) was the main object of this discontent: it threatens to impose a questionable set of standards (student satisfaction, graduate employment and dropout rates) on educational institutions, by which each institution’s eligibility for funding will be measured. In reality, TEF is not about teaching quality but about tuition fees. Universities that perform well according to TEF criteria will be able to raise their already extortionate prices, while those that underperform will see their budgets flatline. 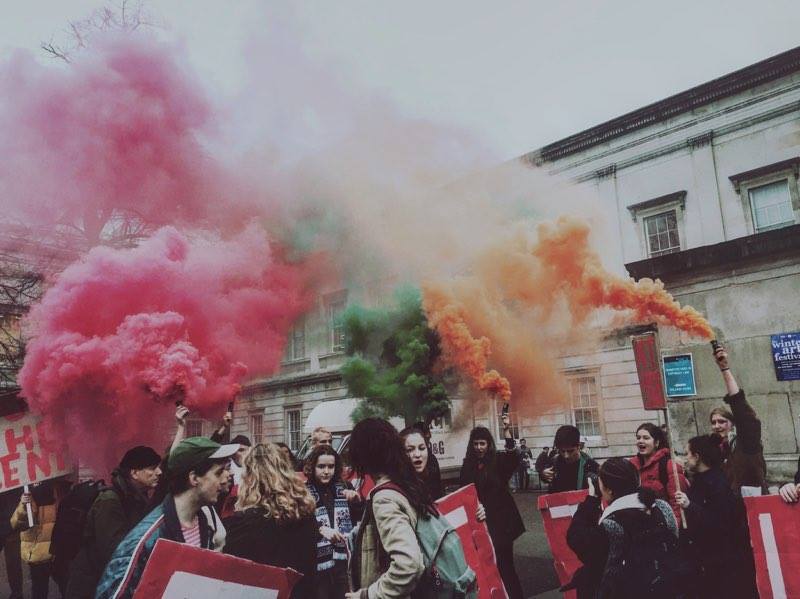 UCL Cut the Rent campaigners were in attendance, vocally connecting the struggle for free education with the struggle for free accommodation. The demo proceeded from the UCL quad through the cloisters to the office of the Provost where we made our presence known before doing a loop of the campus and returning to the quad for the prearranged speeches. The speakers drew attention to the threat that the reforms pose to the accessibility of UCL. They encourage all students to take the following steps:

We support this initiative as yet another episode in the struggle for education for all, regardless of wealth or social class. Of course, we stress that the soaring cost of education is linked inextricably to the deepening crisis of capitalism – a crisis was not caused by students, and for which we should not be held liable. The mounting levels of national debt and monetary inflation bred by this crisis are the ultimate source of rising fees: the government can no longer afford to fund universities the way they used to.

We must, therefore, hold the capitalist class to account: all cuts, tuition fees and corresponding student debt, including that from maintenance loans, must be declared illegitimate and abolished. The NUS must develop close links with the organised labour movement and campaign for socialist policies within it. The only way to achieve free and accessible tuition is for students and workers to struggle together for the wealth of society to be put under workers’ and students’ control, and using that wealth to fund education for all.