Bramber House is being occupied by Sussex students to protest the treatment of Luqman Onikosi, a Nigerian MA student, by the University and the Home Office. Luqman’s visa to study has been revoked by the Home Office, meaning he is being threatened with deportation. However, Luqman has a severe liver condition that requires healthcare which he cannot get in Nigeria. His deportation would mean sending him to his death.

The Sussex Marxist Society stands in solidarity with Luqman and the occupiers, and fully support their demands and will support any measure the student body might take to advance this struggle. The University must oppose the deportation and other racist Home Office policies like Prevent, and award Luqman his MA. We support the extension of full scholarships to refugees and the effort to decolonise the curriculum. We condemn management’s appeal to the courts to force our colleagues out of their own university.

The treatment that Luqman is receiving should be viewed in a wider context where international students and workers, as well as refugees, are treated only as cash cows. Students and workers who aren’t from Britain are only valued by the state and the establishment if they can easily be exploited for profit.

All of this is due to the continuing crisis of capitalism. The University remains complicit because upper management are in the pocket of the government cutting their budget. Through the racist treatment of international students and refugees, and their scapegoating in the press, the ruling class tries to keep our eyes off them and their crumbling system. Nothing gets done unless it turns a profit.

Along with the demands of the occupiers, we demand:

• free education for all and the democratisation of our universities

• an end to the racist treatment of foreign students and workers, and an end to borders and the nation state

• an end to the capitalist system of exploitation, greed and profit.

• nationalisation of the commanding heights of the economy, taking economic and political power into our own hands, and the establishment of an international, democratic socialist plan of production 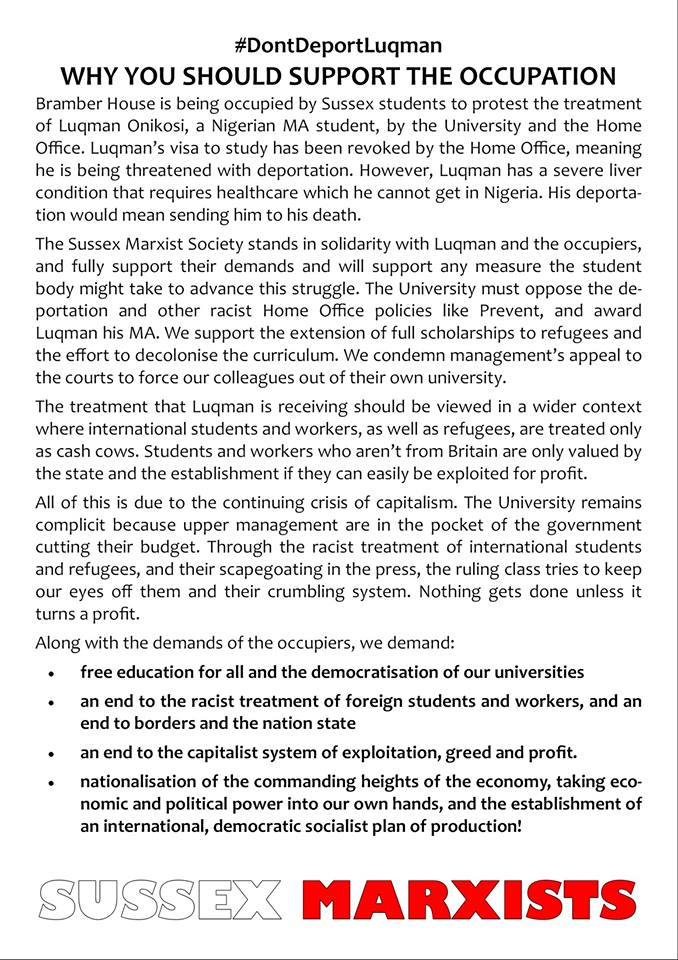