British Marxists on the rise

110 Marxists from all over Britain met in London, on Saturday 16th Feb, discussing the nature of work under capitalism, the history and role of Marxists in the labour movement and how to concretely prepare for the fight for socialism. Just one day after the historic school student strike, the energy and militancy amongst the young was tangible.

The day was kicked off by a session on ‘Brexit, Corbyn and crisis: the fight for socialism’ with Ian Hodson (president of BFAWU) and Rob Sewell (editor of Socialist Appeal). Ian spoke about the history of the BFAWU and the need for solidarity and collectivism. He made the point that we cannot look to the law as a protector of workers rights. The legislation that we have today, is only there on the back off the labour movement, and workers fighting collectively. Moreover, that we still have far more to win.  Rob in turn, explained the history of Marxists in the labour movement, and new unionism. He explained how Clause 4 was first made part of the labour party constitution, and how it should be used in the fight for socialism. 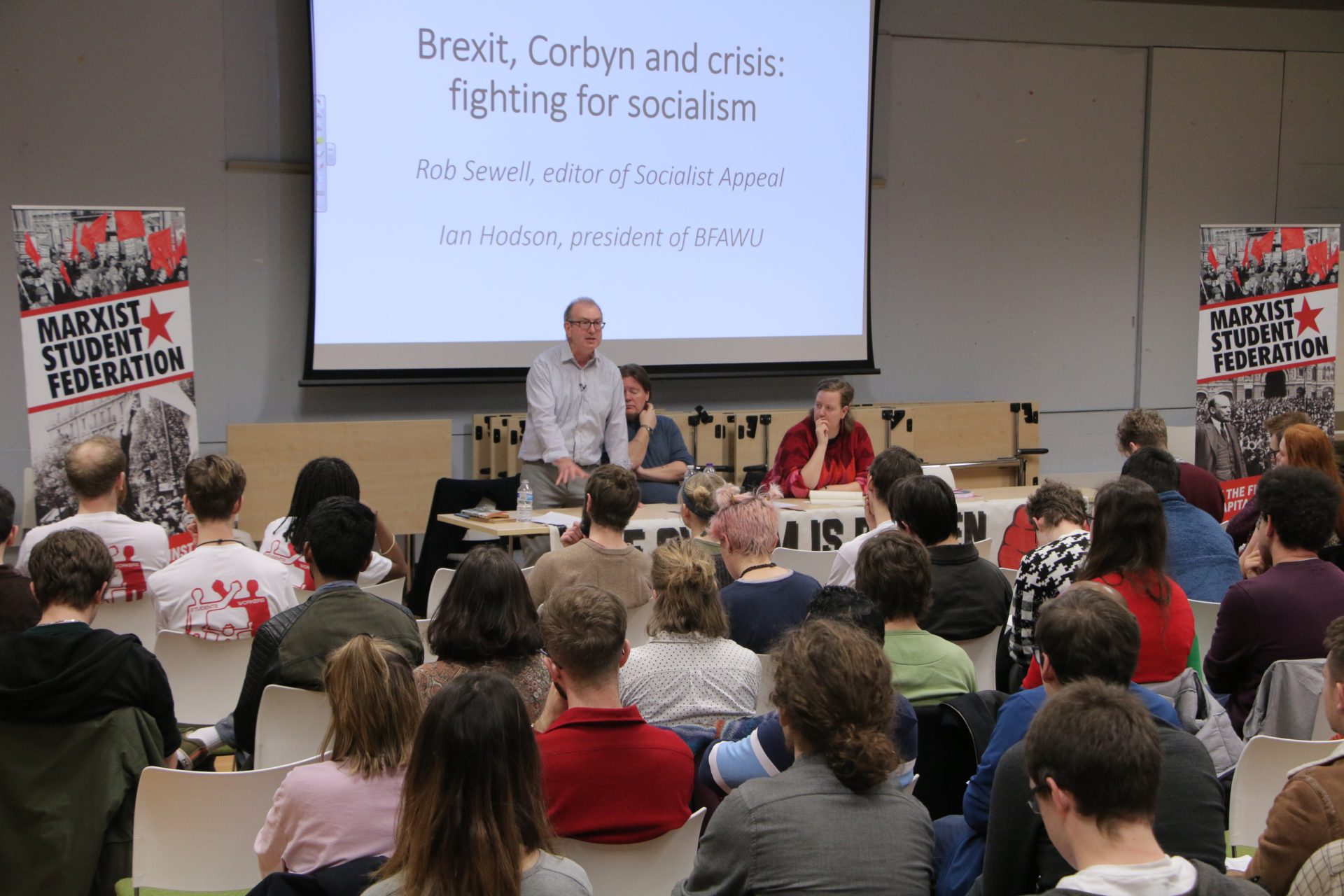 The next session centred on Work under capitalism: fighting for our rights with Jan Michels (Belgian Couriers Collective) who came from Belgium to London specifically for the conference and Joe Attard (former GTA campaigner at Kings’ College London). Joe spoke about the severe exploitation that occurs in universities. Higher education is the most casualised part of the public sector outside of medicine. A lot of young students, outraged by the exploitation they see in universities, are active in the fight against outsourcing. However, Joe and other contributors from the floor explained that the role of students in the fight for socialism is an auxiliary one. Workers hold the power in their hands, but students can unite and fight alongside them. Jan Michels spoke concretely about the exploitation in the ‘gig economy’. As a Deliveroo worker, he explained how Deliveroo alters its algorithms without explanation to workers who in turn are facing a constant decline in their wages. 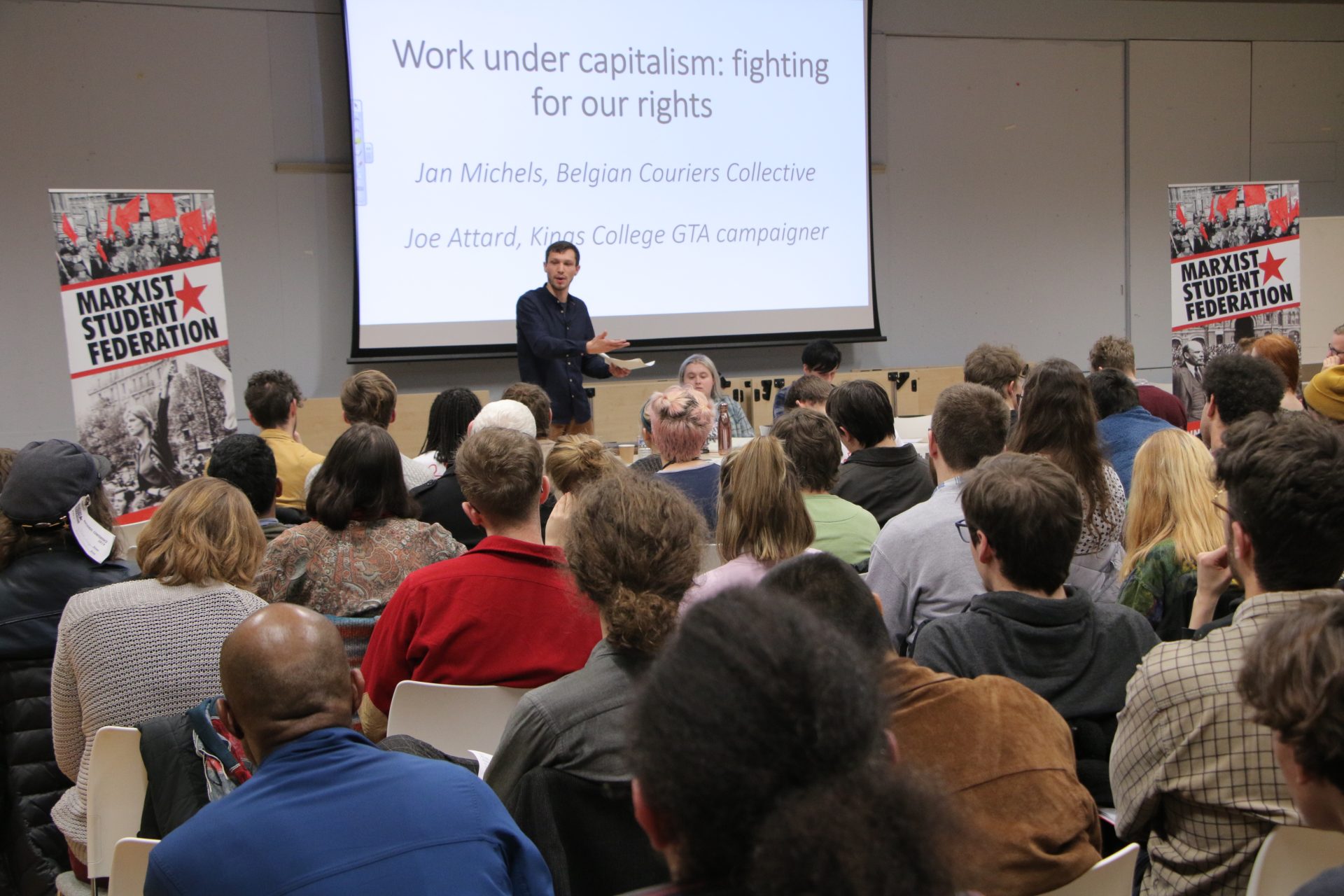 After a short break, an emergency motion was put to the conference in solidarity with the Bolivarian revolution and against the ongoing attempted coup in Venezuela. An update on the situation was given by Jorge Martin (Hands off Venezuela!) who explained that the bourgeois press is continuously spouting lies and misinformation about the situation. The motion was passed unanimously, condemning the imperialist coup against the democratically elected president Nicolas Maduro. A solidarity photo was taken shortly after.  In addition, a speaker spoke about the ongoing imprisonment of a Marxist student (Rawal Asad) in Multan, Pakistan who was arrested for attending a peaceful protest. Not only have the police lied and caused delays in this process, he has now been charged with sedition – and the judge refuses to hear his case. The MSF categorically condemns the actions of the Pakistani state and demands his release. 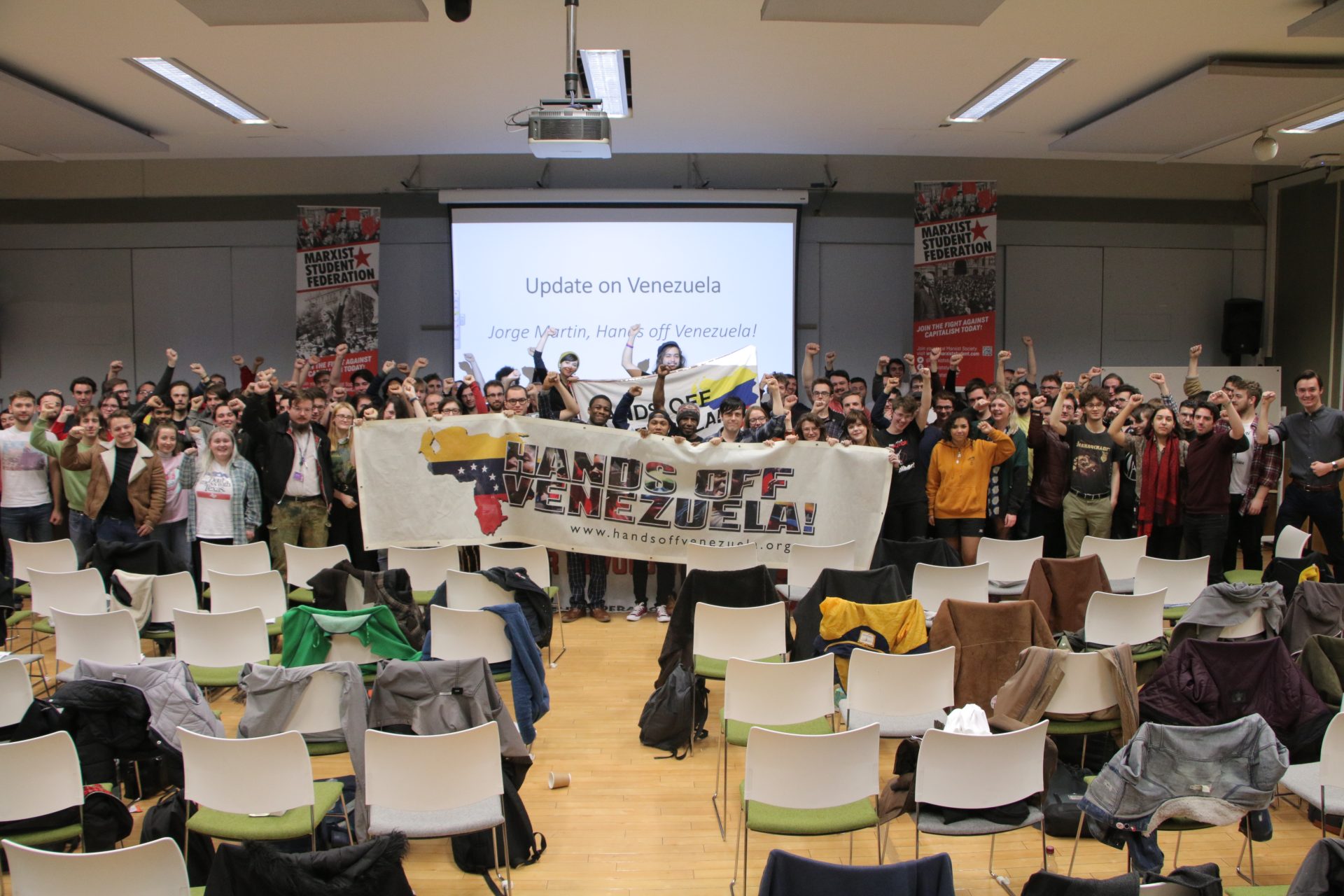 After this, Dora Dimitrova (President of UCL Marxist society) led a discussion on Rosa Luxemburg, her life and ideas. Luxemburg’s contributions to Marxism are a heritage we must claim. The assassination of Rosa deprived the German movement of the political leadership that was necessary at the time. She explained the most fundamental lesson for Marxists to learn is that of the need to build a revolutionary organisation capable of guiding the workers to victory. 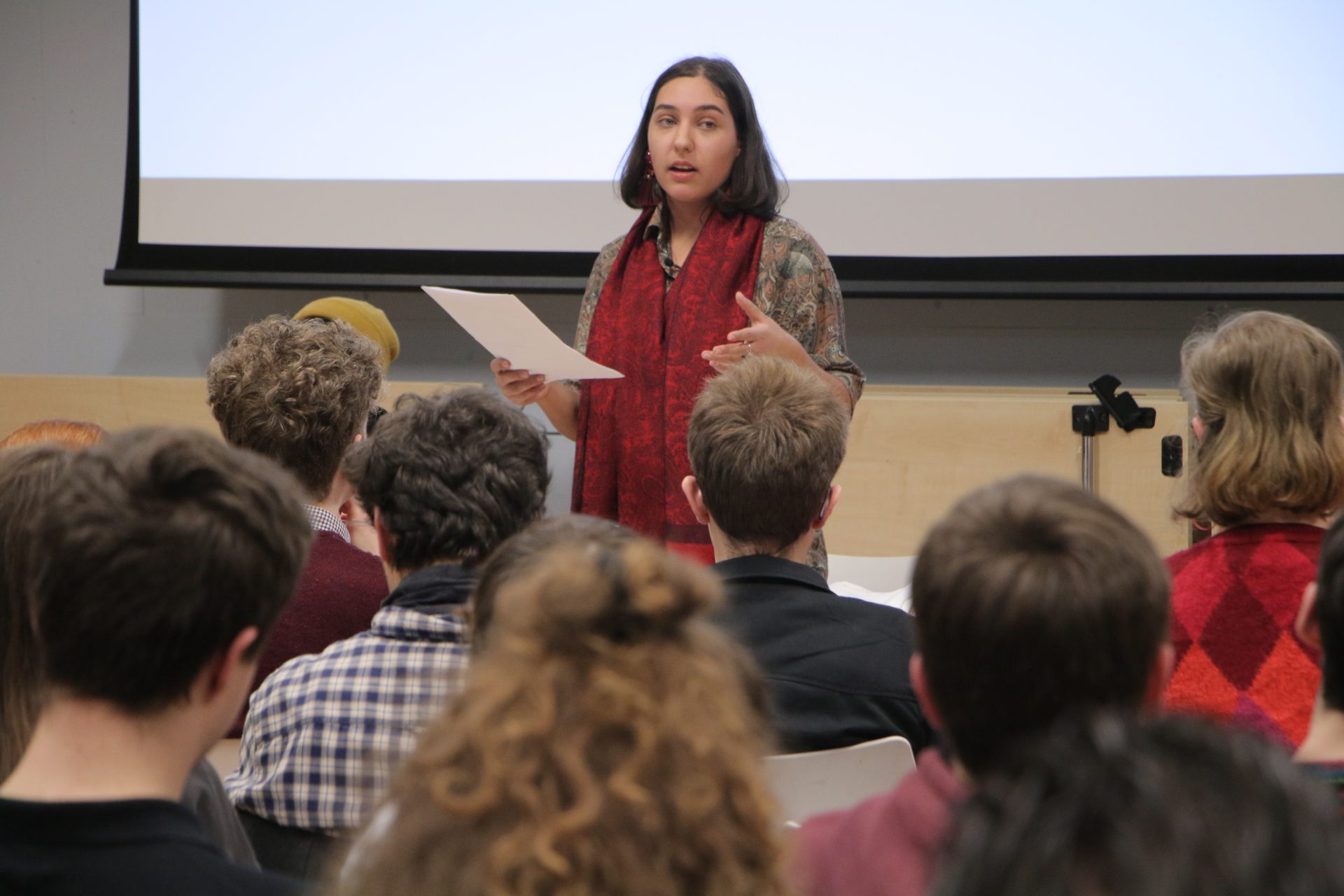 The final session was on reports and plans of the MSF, by Fiona Lali (National organiser of the MSF). It was celebrated that we now have 32 societies across the UK, with 10 delegates (so far) attending the NUS conference later in April. A detailed report was given showing the work of the MSF in last year’s UCU dispute, with photos of comrades on the picket lines, at occupations and teach outs where we explained the need to transform the strike into a public sector general strike to bring the government down.  It was once again re-iterated that students when isolated don’t have the power to change society, however in conjunction with the working class they can play a profound role. The need for Marxist societies to look beyond campus, and decisively enter the labour movement is greater than ever. While Marx’s grave has recently been vandalised in Highgate, the Marxists at this conference were more determined than ever, to embolden our forces and fight to achieve socialism in our lifetime. 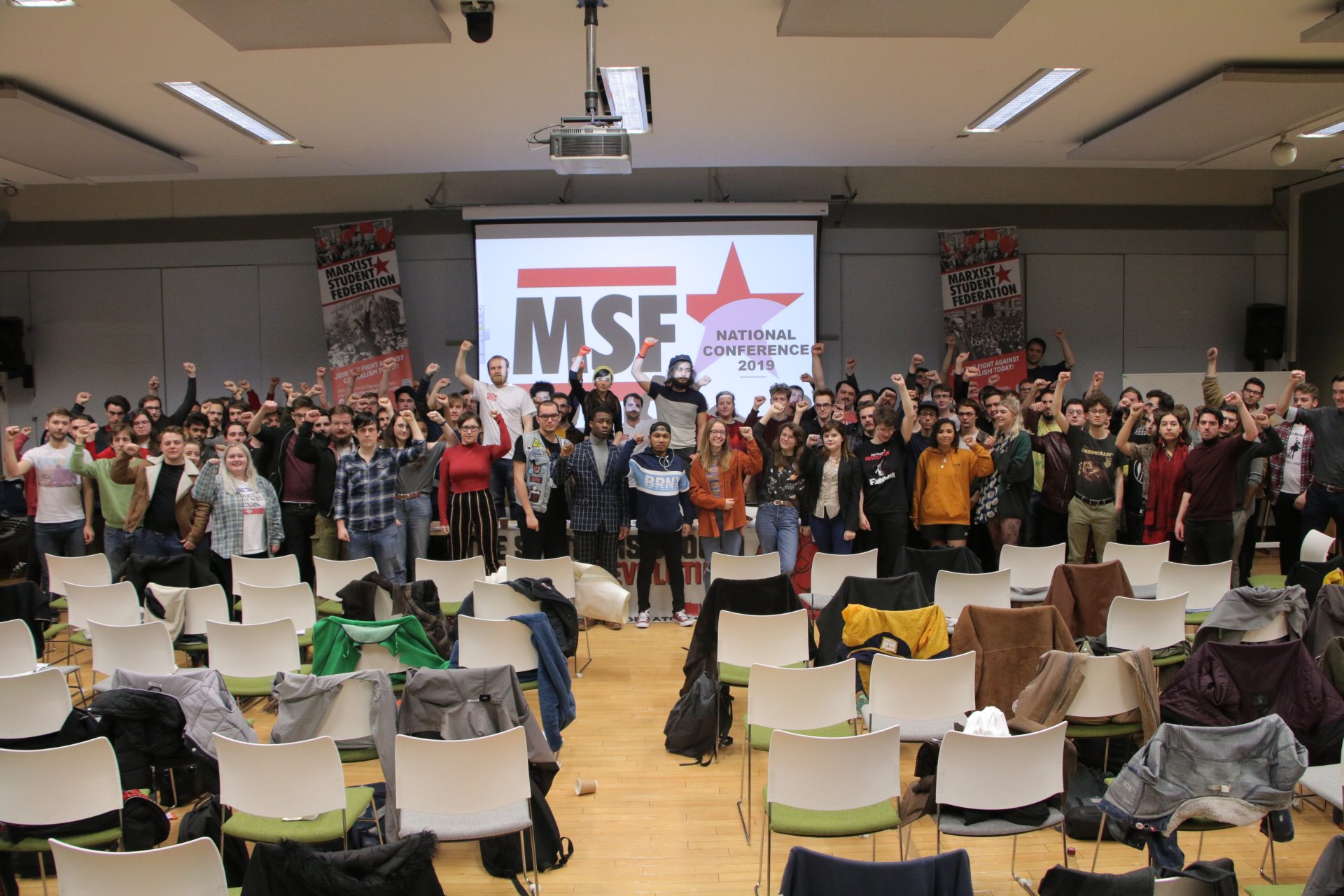