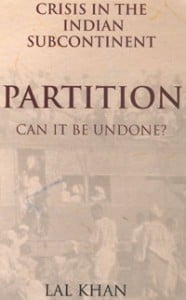 Partition is an analysis of Indian history written by Pakistani Marxist and member of the International Marxist Tendency (IMT), Lal Khan. The title of the book refers to the partition of the Indian subcontinent into a handful of different countries. This analysis begins with a brief overview of Britain’s conquest of India but quickly moves into the final third of the period of British rule, charting India’s thirst for freedom and its tragic road to partition.

The second half of the book deals with the bloody consequences of partition leading up to modern day Hindustan (the Indian subcontinent), cataloguing the problems of poverty, corruption, crime, state repression, and the subjugation of women and minorities. Khan explains how these are not unrelated to Hindustani capitalism and how, in fact, there can be no solution to these problems under capitalism.

As a Marxist and an optimist Lal Khan ends with hope, explaining how the masses, weary of capitalism, will be drawn to a genuine working class program that calls for socialism.

Partition navigates Indian history by understanding the perspectives and interests of various political and class forces. The book explains how these forces tug at each other and this gives us an insight into the history that is lacking from most other works on the same topic, preoccupied as they are with simply jumping from one headline event to the next. With Partition we get the dialectical development of India’s history, rather than the tabloid view of things.

As one would expect from a Marxist author, the orthodox view of a number of topics is challenged. For example, Khan explains that Ghandi’s true historical role was to pacify the restless poor in the interests of the rich. And he highlights the heavy influence socialism had in the independence movement, the failure of which was primarily down to the blunders of the leadership. These points are thoroughly explained and backed up with a bounty of historical evidence. As a mathematics student, I would even say that Lal Khan does not just argue his claims but mathematically proves them. From this it is clear that Partition is well sourced.

Partition, being a small book of a little over 200 pages, covers a broad section of Hindustani history. As a result it is not possible to give some events as much detail as others. However, this book’s value lies in the superb analysis given to distinctly “red” events such as the 1946 Indian naval mutiny, which are forgotten by most other works.

Lal Khan also avoids going into depth on the question of outbreaks of proletarian revolt and the early activity of the Communist Party of India. As with all large historical topics, the writers’ skill is obvious, not in what is covered, but in what is not covered. Lal Khan’s brevity on certain issues seems deliberate and careful. He was clearly writing with a certain audience in mind – people who already have some knowledge of the period or who are looking to read further around the topic beyond this one book, particularly people of Hindustani origin. Thus Khan avoids emphasis on mainstream facts and themes and instead dedicates himself to challenging bourgeois myths about partition. Although Khan assumes some background knowledge of Hindustani history, a complete novice on the matter will not find themselves lost. Lal Khan’s choice of audience is the correct one, as it is the Hindustani masses who must be won over to the ideas of scientific socialism to pave the way for a socialist revolution in the Indian subcontinent.

Approaching periods of crisis will force the masses into struggle. As this happens, and as the ideas of Marxism gain a louder echo, the demands raised by books such as Partition will grow in popularity among the masses.

(Hindi for long live the revolution)

Partition is available to purchase online at www.wellredbooks.net