Victory to UCU! Students must support the strikes!

The UCU’s London branches came together for a rally and march on Wednesday 26 February to mobilise support for the strike and put pressure on management. Around 750 angry lecturers and staff marched through central London up to the Bank of England, joined by Marxist students from UCL, KCL, SOAS, LSE and Queen Mary’s University.

It is fitting that a march in support of such a strike ended at the heart of the City. The deteriorating conditions of university workers are a direct product of capitalism in crisis. Higher education staff – once a somewhat more privileged section of the working class – are now largely casualised, worked to the bone and at risk of immense pension cuts.

All of these attacks are rooted in the 2008 economic crash, which means that severe cuts are on the agenda across the board – with the exception of the pay and bonuses of the bosses and vice chancellors, of course!

This explains the outrage seen amongst HE workers and students alike on Wednesday’s march. Their sense of betrayal was captured in the well-echoed slogan: the money’s there; where’s our share?

The lecturers and staff are clearly determined, adamant that they have worked hard for fair wages, conditions and pensions, but are being taken for fools by the management. Many universities churn out ever greater profits; provosts and chancellors receive millions of pounds in bonuses and expenses. Meanwhile, students keep on paying more for an increasingly stretched-out education service. All of this while academic staff are being forced into a race to the bottom.

This all fits in with the general pattern under capitalism: despite the fact that their system is failing, the bosses have never been richer. It is the workers, youth, and poor who are being made to pay for this crisis.

This is why students must join such protests and join their lecturers on the picket lines. As one of the union representatives pointed out on the footsteps of the Bank of England, we are united in our struggle against capitalism itself.

But he also pointed out that the employers think they can just wear the unions out over time. The strike must keep on growing and gaining support if it is to succeed in all of its demands.

If this strike does succeed, it will be an immense blow to the business-like system under which universities are run. From there, we can achieve much more: free, quality education; and control of universities by staff and students.

Students and workers – unite and fight!

In Leeds, the Marxist society has been helping to lead the Student Staff Solidarity campaign there. Comrades have been at the picket lines, delivering speeches and keeping morale up. The comrades have been focused on building knowledge of the UCU strike amongst students aswell. They hosted a public meeting titled ‘UCU Strike: What you need to know’ which saw 50 people attend. This is integral to maintain solidarity between staff and students while management do everything they can divide us.

On top of this, the Marxist society helped organise a huge fundraiser social that raised £665 for the UCU.

Comrades from the Sheffield Marxist Society have been showing solidarity with striking UCU staff at the University of Sheffield. We have been supporting picket lines across the campus; bringing music, tea and coffee to the freezing cold picketers. When we’ve been talking to workers; there is a mood of anger towards UUK and USS for its inaction on declining pay, casualisation, rising workloads and pay inequality. While student solidarity started off small, it has grown as the strike enters its 3rd week.

As well as attending the picket lines, at a solidarity rally organised by UCU and the Students Union two of our comrades gave militant speeches arguing for a socialist education system run in the interests of students and workers and explaining the role strikes could play in bloodying the noses of Boris Johnson and his reactionary gang, both of which were received enthusiastically.

Though, the strikes started off with workers on the offensive, as they’ve gone on with seemingly little progress, some are looking for shortcuts to end the dispute such as student compensation, which they think will apply pressure to university management and force them to concede to their demands. But we must remain clear that such a demand pits students against workers and plays into the marketisation of education, which has thrown up the four fights of the UCU and forces students into eye-watering amounts of debt, this is why we must fight for an end to marketisation. For a socialist education system run in the interests of students and workers!

During the UCU strike Warwick Marxists have been playing a key role as part of the student movement. We have actively intervened in the strike for 8 out of 9 days of the picket line. There we have sold the paper, raised Marxist ideas and taken part in the “Teach outs” including hosting one on the women’s struggle. Before the strike we campaigned to raise awareness to the student population, taking an active part in the Student Staff Solidarity Committee, and being involved in hall runs  to convince more students to come to the picket lines.
Student support has remained strong throughout the student activists, though more could have been done to reach the wider student body. It has been rare for students to make up more than 20% of the picket line and further activities outside of the pickets have been limited to relatively small demonstrations and the teach outs.
Cardiff:
Cardiff Marxist Society has been down at the picket lines supporting our staff on strike. The rally on the first day of the strike was attended by Jeremy Corbyn, which attracted a large number of students. In his energetic speech, he called for free cradle-to-grave education, an end to zero-hour contacts and compensation for flooding victims, which were all met with high enthusiasm from both staff and students. Student presence at the pickets is essential to keep up the momentum of the strikers.
We also took part in a student block marching alongside UCU members, which made its way though Cardiff town. 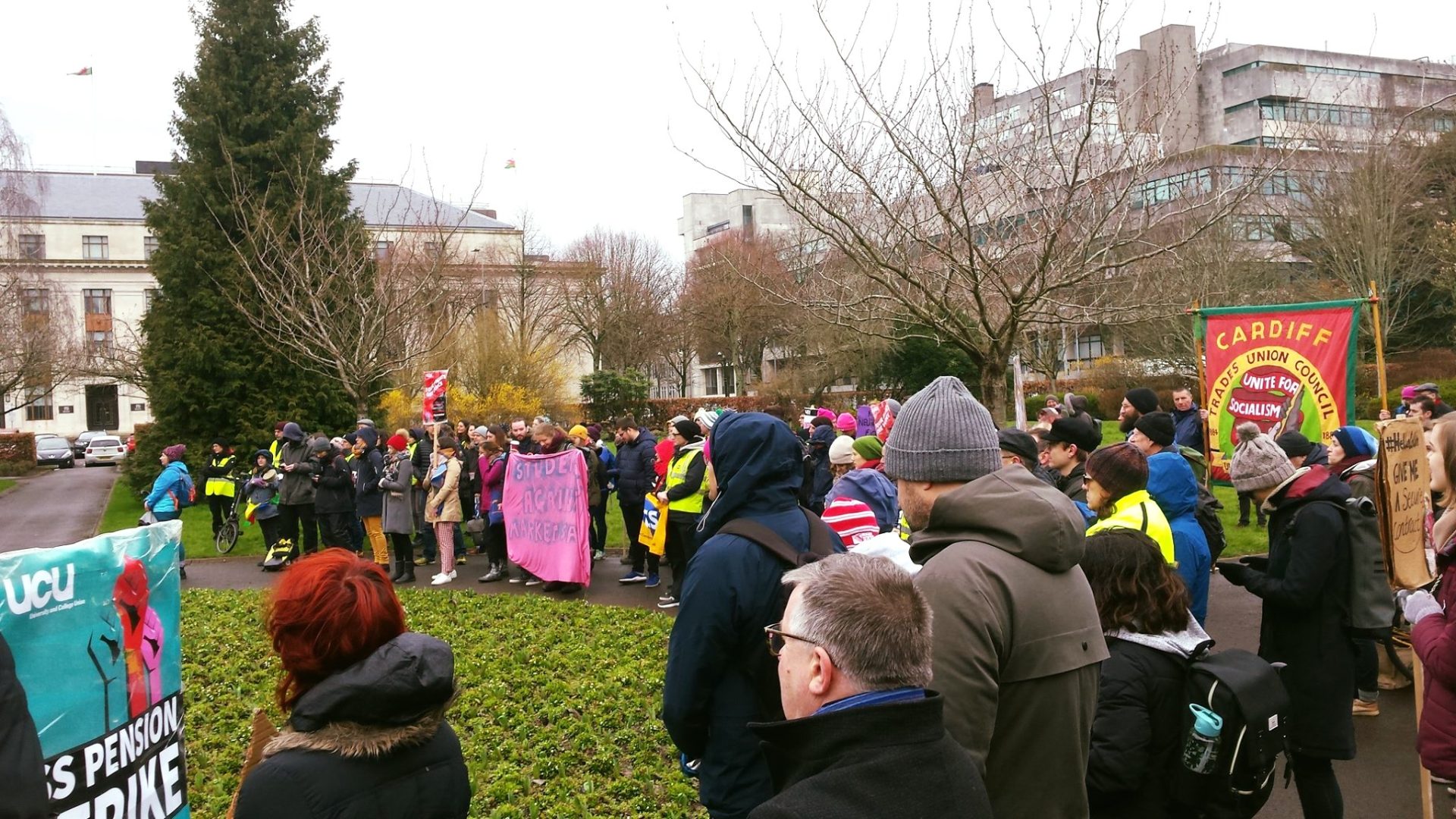 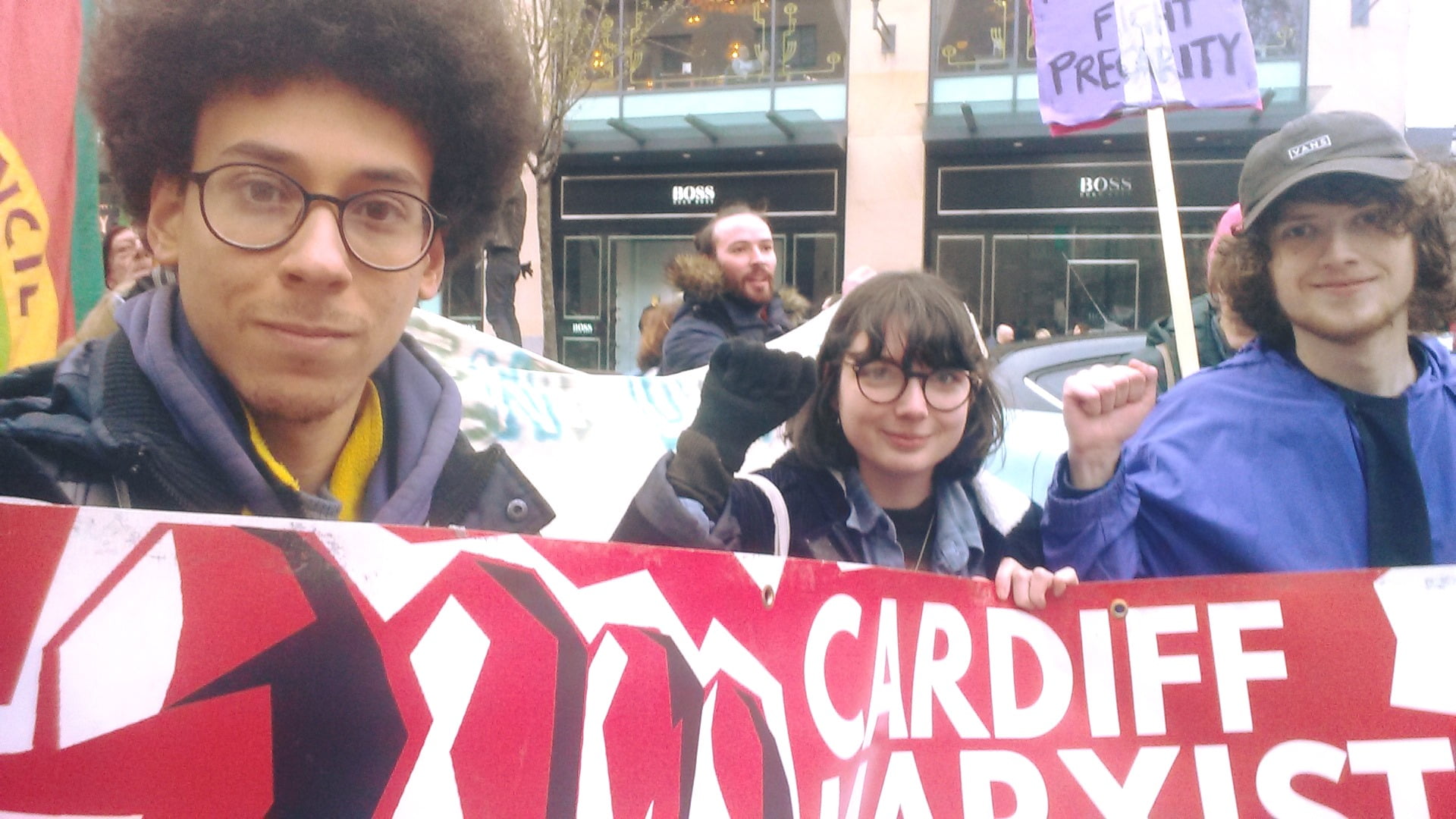