In a time of mass conflict in Israel/Palestine, imperial blockades on Cuba and Latin America in turmoil, Keir Starmer is flag-waving and calling for ‘progressive patriotism’ . We must fight back against this with the genuine internationalism that socialists stand for. Read why here.

In 1848, Marx and Engels closed ‘The Communist Manifesto’ with the famous rallying cry, “workers of all countries, unite!” This is the task that Marxists have dedicated themselves to since even before the founding of the First International in 1864. More than 150 years later, revolutionaries across the world are confronted with the same task today.

As Marxists, we are fighting for the overthrow of the capitalist system. Capitalism is a global system. Therefore, it requires an organised and global effort to overthrow it.

Role of the nation state

Capitalism developed with it the need for the nation-state. In its time, this was a progressive development.

Instead of a patchwork of small feudal principalities and city-states, the nation-state was a unified country under one political system and, therefore, one market to facilitate economic exchange. The old feudal principalities were not strong or large enough to provide the necessary conditions for fully-developed capitalism.

Thus in the early development of capitalism, the rising capitalist class was compelled to overcome these barriers by unifying nations into one state. As cities, counties, and principalities joined to make larger nation-states, the expansion of their markets provided impetus to the further development of large scale industry.

Capitalism has a constant need to grow and expand into new markets. As the productive forces in capitalist countries continued to develop, the markets of these nation-states were unable to satisfy the demand of this constantly expanding production.

For capitalism to survive, it needed to expand to new places. Under capitalism, imperialism is an economic necessity.

Consequently, to provide the new markets that capitalism needed, the nation-states turned to non-capitalist parts of the world and colonised them. The empires of Britain, France, Spain and other European powers created a world market and, therefore, a global capitalist system.

Now, however, the world economy is saturated and there are no new markets to break into. The nation-state has ceased to be progressive and has turned into its opposite: a regressive constraint that fuels competition and wars by individual powers over resources and markets.

Today, the world economy is so connected as a result of globalisation, which Marx and Engels were able to predict, that it is impossible to escape.

Even trading blocs like the EU, which seek to circumnavigate the interdependence of nation-states, are failing.The EU has been in constant crisis for over a decade. We must all break free from capitalism, or nobody can.

Failures of ‘socialism in one country’

Just as capitalism is global, so must be socialism. Genuine Marxists have always maintained that it is impossible to build ‘socialism in one country’. Socialism must be more advanced than capitalism, which is based on utilising all the resources of the world, and a worldwide division of labour.

There are several examples from both history and today to support this. After the October Revolution of 1917, a revolutionary wave swept across the world. However, due to the betrayals of the leaders of the working class, these other revolutions, such as in Germany and Italy were led to defeat..

This left Russia (later the Soviet Union) isolated: the failure of other revolutions meant that it was surrounded by hostile imperialist powers.

Lenin expressly said that he would sacrifice the Russian Revolution for the German because he knew that without the impact of a country with developed capitalism Russian socialism could never be created.  The backwardness and low development of capitalism in Russia led to, an enormous bureaucracy developing.

Russia’s economy in the early 1920s had been shattered  by years of war and aggression by the imperialist powers. With the death and exhaustion from the years of civil war, combined with the defeats of revolutions worldwide, many of the best workers dropped out of political activity.

On the basis of generalised scarcity, a bureaucracy necessarily arose in order to keep the system in check. But unsurprisingly, without the development of a revolution anywhere else this bureaucracy more and more separated itself from the working class, putting its own interests first. Stalin was simply the figurehead around which this bureaucracy developed.

Today, we can see the effects of this isolation on Cuba. As well as the same problems as the Soviet Union, the small island is being strangled by a US embargo that has stopped it from receiving supplies for decades. Cuba is now grappling with a serious economic situation. This has led to counter-revolutionary protests, and a section of the bureaucracy is moving further in the direction of restoring capitalism..

A final point to note is that the working class across the world are united in the oppression that they experience as a result of the domination of the bourgeoisie.

For example, the British working class, who are facing brutal unemployment and austerity like never before, have far more in common with Chinese factory workers and Peruvian miners than they do with the British bourgeoisie. It is in the interest of all workers, regardless of where they live, to take power into their own hands and transform society.

As we mentioned, the idea of an international struggle for socialism is not new. Marx and Engels wrote in ‘The Communist Manifesto’that “the workers have no country”. Marxists built up a series of international organisations, from the International Working Men’s Association in 1868 to the Fourth International 70 years later and beyond.

For various reasons, these groups all degenerated and weren’t able to fulfil their role. However, today we have the potential to build an organisation that is capable of overthrowing the rotten capitalist system and replacing it with socialism – a system that can meet the needs of the working class, not the bosses.

We are currently in the worst crisis in the history of capitalism. The stage is set for  revolutionary explosions everywhere. Workers are rising the world over, from Colombia to the USA to Myanmar. Our socialism must be international or it will not last. Forward to the world revolution! 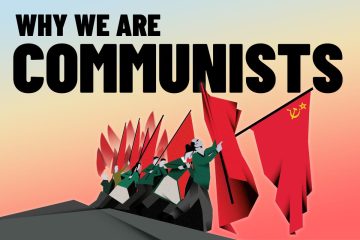