The Federation is growing – join the Marxists!

The academic year is now well underway and the Marxist Student Federation has had its most successful freshers weeks to date. There are now Marxist groups in over 30 schools, colleges and universities, meeting regularly to discuss Marxist ideas and their relevance to today.  Below are a selection of reports from some of the most recent freshers fairs. 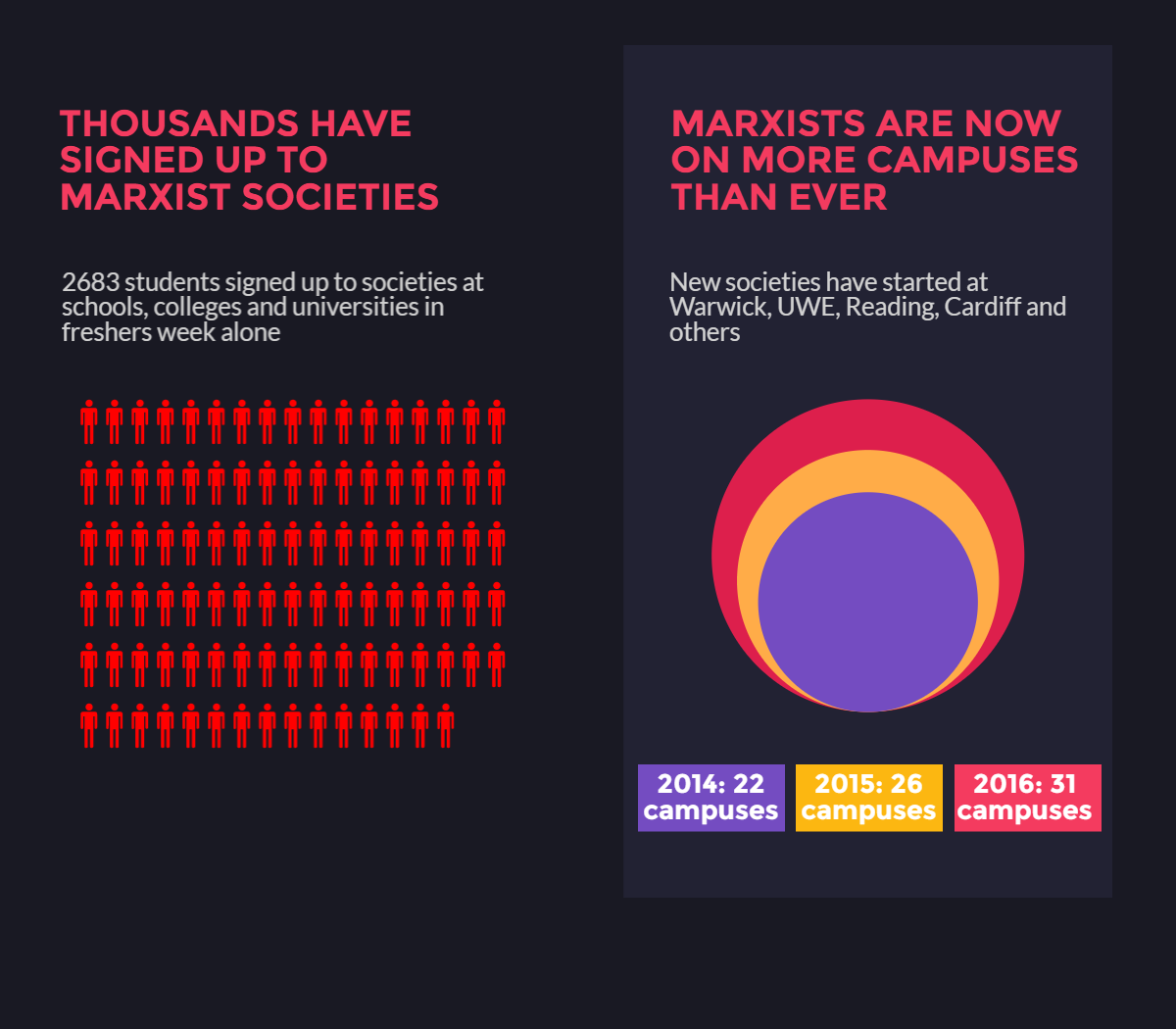 This year’s Cambridge University Freshers’ Fair was extremely successful, with the stall having an engaging and lively atmosphere all day. This success was reflected with a gathering of well over two hundred E-mail addresses. Conversations at the stall were interesting and diverse, with people curious about many different aspects of Marxism, ranging from historical analysis to art. The stall also attracted a wide variety of people from various backgrounds and nationalities, which reflects the universality of Marxist thinking.

We also invited people to various events that we are holding over the current term to answer any questions they may have and to engage them with various topics such as an introductory talk on ‘Why Marx Was Right’. Through these activities we hope to encourage as many people as possible to join our society and become comrades we can stand with in our fight for a better society and world.

The first meeting of Durham Marxists, on Thursday night, had 18 people attend. Daniel Morley spoke on Corbyn, with a good discussion following. We sold 29 copies of the Revolution newspaper and 5 Socialist Appeals and got about 30 email addresses outside the student union in the build up for the meeting. Several people came to the pub afterwards and things are looking good for a planning / social meeting next week.

Our freshers’ fayre (known as “The Bunfight”) was held on Wednesday this week. 8 of us were helping out with the stall. Three were present on the stall at all times whilst the rest leafleted outside or went to the library to print out another 100-batch of leaflets.  75 people signed up to the society, we printed and distributed 500 leaflets for our first meeting and 300 or so programmes for our meeting schedule this term.

A lot of interest was taken to our stall and in our first meeting of the term held that evening, we had 26 people in attendance. Unlike any other meeting I’ve been in, not one person left the meeting early until the 2 hours were up and almost every single person made a contribution ranging from “What does “austerity” mean?” to questions about the differences between nationalisation under a capitalist state and seizing the means of production under a workers’ state. Loads of people came to the pub after for further discussion.

Sheffield had a successful freshers fair on the 23rd. We had six people running the stall throughout the day and managed to sign up over 70 people, sell 15 Revolutions and a copy of the Socialist Appeal. The quality of the lead off from Daniel Morley on the Labour Party, and the high-level of our discussions afterwards enthused everyone. Overall I’d say there is much to be hopeful for, for the Sheffield Marxists this year.

At Swansea University Fresher’s Fayre all the people who signed up were very interested and showed lots of enthusiasm. The ones we spoke to, showed lots of knowledge and real interest in Marxism. Our first meeting had 20 people at it. Several of the members of previous years came out to lend us a hand and were very helpful. In total we gave out around 200 of our ‘home made and printed’ leaflets.

We had 8 people helping us out with our Fresher’s Fair intervention at Newcastle University today. There was a very good response from the young people we met and it was quite noticeable that the Revolution paper was popular. The slogan “Do you want a Revolution?” providing a good opening for discussions with those who were drawn towards our stall. People were excited by what we had to say and enthusiastic about getting involved with the activities that we have planned.

This is set to be a 3rd solid year of successful activity at the university with our presence having grown year on year. We are now in a position to be seen as a little bit of a point of reference as we have met a number of people who sought us out having known about us and heard that we were going to be at the Fresher’s Fair. There was also an anti-EDL demonstration in the city centre on Saturday which saw people seek us out because they knew we were going to be organising a contingent to take part in the demo and they wanted to march alongside us behind our banner. With this base it is likely we’ll be able to have a very good impact on campus and around Newcastle in the coming year.

In the end we sold at least £17.10 worth of material which including 21 copies of Revolution, a Marxism and Anarchism book, a Trotsky badge and 3 or 4 copies of Socialist Appeal. We got the contact details of 65 people.

This was only day one of the Fresher’s Fair event so we still have tomorrow to go as well as our first public meeting on Wednesday, with Adam Booth speaking on “Defend Corbyn! Fight for Socialism!!”, and then a “Join the Revolution” fundraising social on Saturday to look forward to. 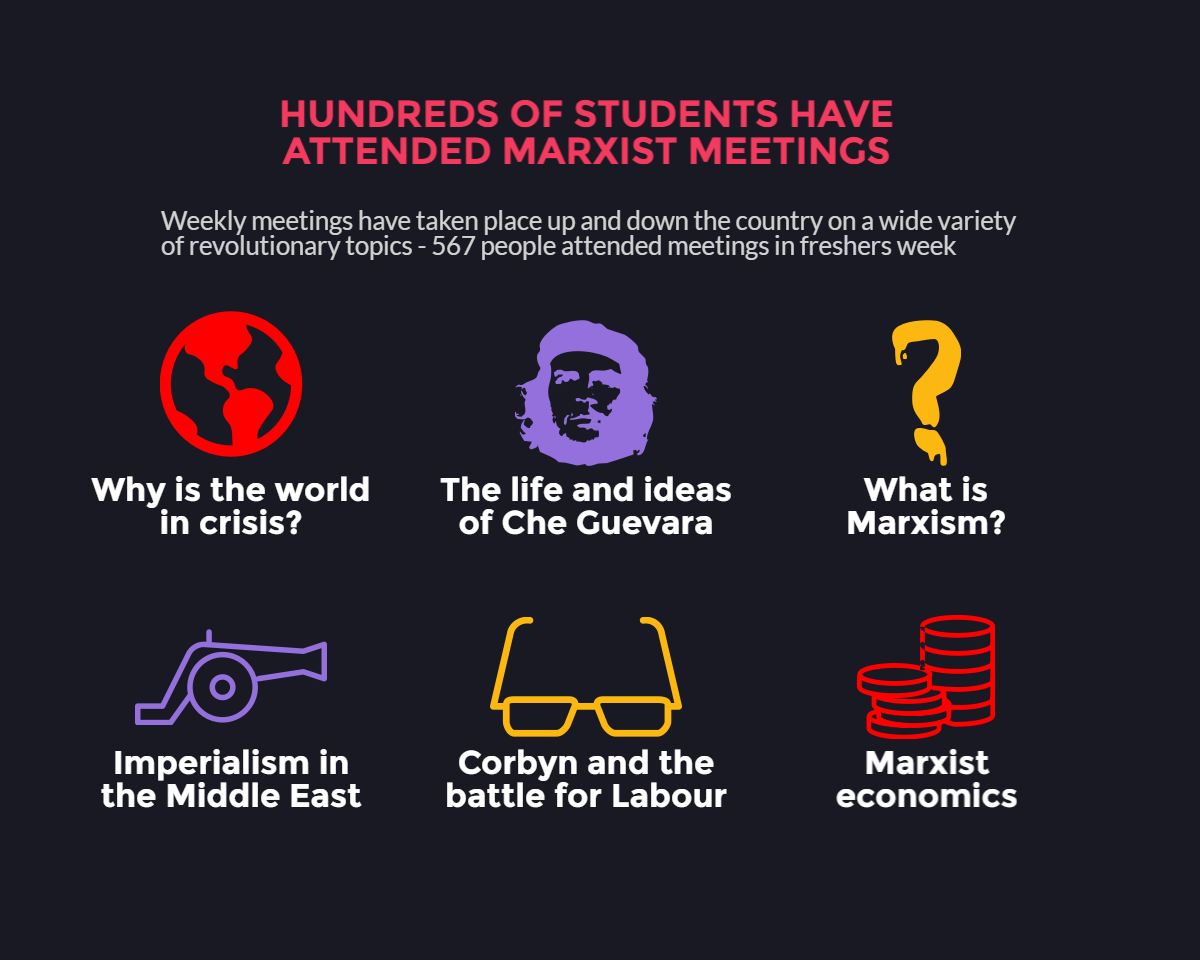