Schools, safety and self isolation: Only solution is workers’ control

Published by Marxist Student on July 8, 2021

The Tories have clearly learnt nothing from the past year’s tragic events. Due to the government’s recklessness and incompetence, the virus is once again ripping through schools. As a result, hundreds of thousands of pupils are being sent home.

The latest figures indicate that 28,000 pupils are currently testing positive for COVID, with the highly-transmissible Delta variant now dominant.

In turn, 641,000 pupils have been forced to stay at home after either being infected, or coming into close contact with someone who is. 1-in-20 school children are now finishing the academic year from their bedrooms.

Teachers are heartbroken. Due to closures, 23 weeks of school have been lost for every pupil due to the pandemic. The economic cost is predicted to come to £1.5 trillion in lost productivity and earnings for an entire generation. Added to this is the lasting impact on mental health and inequality.

September’s Year 11s would have last completed a full school year in Year 9. Many Year 8s  will have never turned on a Bunsen burner.

The goal of closing the gap and helping students catch up is unenviable – though, remarkably, the government thinks £50 per pupil should just about do it.

Head in the sand

The question that all teachers, parents, and pupils are asking is: How can education continue whilst the virus spreads?

Gavin Williamson, the Tory education secretary, has a simple answer: Bury your head in the sand. Sweep the problem under the carpet. In short, ignore reality.

The government is proposing that from 19 July, so-called ‘Freedom Day’, pupils will only need to self-isolate if they have a positive PCR test.

Meanwhile, if a child sits next to someone who tests positive for five lessons a day in a poorly ventilated classroom, plays football with them in the playground, and shares the same lunch table, there is no need to worry.

The education secretary doesn’t even advise putting on a mask. After all, what is a 95% greater risk of transmission really?

Tory ministers justify their blasé approach by pointing to currently low hospital admissions, and to the fact COVID deaths amongst children are extremely rare.

But what is conveniently ignored is that the effects of the disease linger. The ONS estimates that 15% of infected children experience symptoms for more than five weeks. Early results from Italy suggest that at least one symptom will persist for over 17 weeks in more than half of children.

The truth is that we don’t know what the long-term effects are. In effect, the Tory government is running a live experiment on the eight million school children of Britain.

Meanwhile, transmission in schools spills over into the rest of society, driving up case numbers in the wider community. And with only around half the population fully vaccinated, this could have a devastating impact on people’s health.

Once again, the Tories are gambling with our lives.

Children (and staff) are effectively being asked to take one for the team – that is, for the capitalist class.

What the Tories are really saying – on behalf of the bosses – is that pupils must remain in school so that their parents can continue to go to work.

There has been a cacophony of protests from the ruling class against the idea of closing schools or sending at-risk students home. Joining this chorus are Tory MPs, former cabinet ministers, and Downing Street insiders – all of whom are adamant that isolation rules must be scrapped.

These establishment figures cry crocodile tears about the damage to children’s education. But their hypocrisy is starkly revealed by the Tories’ refusal to take even rudimentary action and provide proper funding to address the learning gap.

In the past year alone, we have seen the Tory government fail to provide internet access and laptops to the millions of students who cannot access online learning. Instead, they have left this up to the NEU (National Education Union), who have donated £1 million to children in poverty.

The Tories also failed to put in place plans for alternatives to summer exams, despite last year’s exam grading fiasco, and despite teaching unions pleading with them to do so since last September.

And despite the advice of teachers and their unions, no efforts have been made to bring in former teachers who have left the profession, in order to reduce bubble sizes and slow transmission.

The Tory Party does not care about children and their education in the slightest. They have spent over a decade in government – and over a year presiding over this pandemic pandemonium – butchering schools at every turn.

Now we are faced with the horrific dilemma of choosing between pupils’ education and pupils’ health. This dilemma is the direct result of a system that puts profits before lives.

We cannot trust the Tories with our lives, or with the education of the next generation. Instead, to defend education and make schools safe, we must organise and fight to put workers in control. 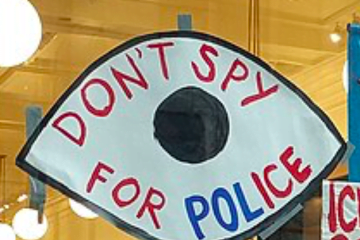 The Met Police’s Special Demonstration Squad (SDS) was an undercover unit tasked with infiltrating political groups. Operating between 1968 and 2008, the squad has been under scrutiny recently, facing a public inquiry into its activities.