How Marxists understand the world: Why we are materialists

For most people, the word Philosophy will immediately bring to mind something like the image of a university seminar room full of intellectual types deeply engaged in high level discussion. It appears as something obscure, reserved for only the most knowledgeable people, and – more importantly – it appears as completely irrelevant and divorced from the realities of day to day life. Most people don’t have the time for such trivialities because they’re too busy trying to make ends meet, trying to raise their family, or trying to relax and enjoy what little time off from the monotony work.

While much of what is spoken about in University philosophy departments is actually completely irrelevant to the outside world (that’s another conversation for another day!), it is no accident that this illusion of philosophy as complex, enigmatic, and – ultimately – insignificant has been allowed to foster.

A philosophy is – in simple terms – just a framework for interpreting and understanding the world around us. It is a set of ideas, observations, and assumptions through which we process information in order to make sense of it.

A philosophy is something, therefore, everybody has, whether they know it or not! This is important because people who don’t think they have a philosophy do have one, they just haven’t consciously selected a philosophy of their own. Rather, they have – through education, media, culture, and social life – absorbed the dominant philosophy of the world around them, which tends to be that of the ruling class as they use their control over different spheres of life to push a worldview that justifies the world as it is.

Marxists therefore argue the working class needs its own philosophy so that they can understand the world and go on change it, and this philosophy is Dialectical Materialism. But this isn’t an arbitrary schema designed to justify revolution and communism. If a philosophy is a way to understand and make sense of the world, it has to bear relation to the world, otherwise it isn’t going to be very helpful, and will in fact be a hindrance. Marxists therefore argue that, aside from dialectics, materialism is an absolutely necessary component of our philosophy.

The major cleavage in the field of philosophy is over the question of the relationship between mind and matter. Materialists, such as Hobbes, Diderot, and Marx, argue that matter (e.g. the material world) is primary: the world around us exists, and it can be known. Moreover, they argue that there is no real distinction between mind and matter – just that matter organised in a certain way results in mind and consciousness. Idealists, such as Hegel and Descartes, however, argue that our ideas and sensations are something separate from, and different to, matter; that ideas (and not the world around us) are primary; and that the world does not exist independently of our perception of it.

What does this mean in practice? If asked whether sound is made when a tree falls down in the woods with nobody around to hear it, materialists would argue that yes, it does. Idealists, in the most extreme and explicit case, would argue that there is no guarantee the tree exists independently of us, or that the tree only comes into being when someone is around to perceive it. The idealists, in other words, are saying the world itself is a product of our minds.

Whether a philosophy is materialist or idealist is also important for questions of what we can and cannot know. For materialists, things exist independently of our ability to observe them, and by observing things, we are able to begin to understand them. This understanding of a thing may be imperfect, but this does not mean that thing is unknowable – rather, with further observation, our understanding can develop, and can more closely approximate the nature of the thing.

Idealists on the other hand completely reject the possibility of knowing the objective characteristics of things. This is because, for idealists, things do not exist beyond our perception of them, so things therefore do not have an objective existence independent of us.

Why is this Important?

Unless you believe the world ceases to exist when your eyes are closed, you’re probably reading this and thinking that idealism sounds like an utterly ridiculous position to hold. But what is surprising is how prevalent idealism is in many different areas of the modern world.

This is because most idealism is usually presented in a very-shamefaced way, and most proponents would vehemently deny that its really idealism. They’d argue “Well of course we’re not denying that trees exist. We’re just saying that trees are only trees because we exist to assign meaning to trees.”. However, this is just trying to stop idealism half-way – it tries to place the role of perception and thought as primary without following through with the inevitable conclusion that if our perception creates individual features of the world, the world is therefore a creation of our perception.

This is important because, given that philosophies are the framework through which we interpret the world, idealism can have really damaging implications in a wide range of fields. In social science, idealism is damaging because the philosophy underpinning our thinking determines how we understand the causes, nature, and solutions to social issues. A major offender in this regard are the postmodern and poststructuralist ideas common in the social science departments of Universities to day.

On the question of oppression, these schools of thought argue that oppression is ultimately baseless and is merely the result of dominant social and cultural ideas and narratives. For young people disgusted by appalling racist, and sexist attitudes, these ideas can therefore seem appealing. But when we begin to scratch beneath the surface, these trendy postmodern ideas pose a problem.

For postmodernism, how oppressive ideas come to exist (or come be dominant) is never really explained – it is just an accident. If these attitudes have no material basis, and have become culturally dominant by fluke, there is nothing in the material world we can change to get rid of them. If oppression and prejudice are simply the result of ideas, all we can do is try to create alternative ideas and narratives that challenge the old ones. For example, Judith Butler argues the only way to challenge gender inequality is through the parodying of gender norms.

Well-meaning young people are therefore left with few solutions to major social problems that impact their day to day life: drag performances are used to try and challenge gender oppression, “checking privilege” is used to try and challenge racism, unlearning and reclaiming certain words is emphasised as a key way to challenge the existing order of things. In short, these methods advocate trying to change the world through changing ideas.

But for Marxists, as materialists, oppression doesn’t originate in ideas or language – it originates in real and existing relationships. For example, racism is intertwined with the origins of capitalism, where the dominant philosophy of capitalism – liberalism – proclaimed equality and liberty, yet cheap labour was needed for development of capitalism in The Americas. Racist ideas therefore emerged to justify the super-exploitation of certain groups of workers and to divide the working class along racial lines: by portraying enslaved people as sub-human, their slavery was justifiable and it prevented white workers from uniting with black enslaved workers. Moreover, this dynamic will exist as long as capitalism exists: by dividing the working class, the super exploitation of certain layers of the working class can be achieved and their unity can be prevented.

For Marxists, racism – and indeed all other social problems – have identifiable causes. Therefore, we don’t confine ourselves to the limited task of challenging dominant cultural narratives around oppression: we set ourselves the task of ending all oppression by destroying it at its roots. In regards to racism, the only way to do away with it is to do away with it’s cause: capitalism. Once the material basis of racism has been removed, there is no basis for racist ideas – how can you be worried about immigrants taking your job when everyone has a job and you have more than enough to get by?

That isn’t to say that prejudiced attitudes will disappear overnight, but rather that by washing away the topsoil, racism can no longer lay root. Marxists therefore argue that to change ideas, you have to change the world.

Also, why not get a copy of In Defence of Marxism – the quarterly theoretical magazine of the International Marxist Tendency. This issue features a trio of articles on the topic of dialectical materialism. Click here to get your copy! 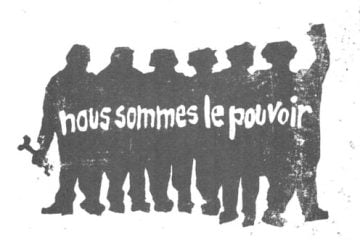