On the 20-23rd July, two comrades from the Marxist Student Federation were invited to attend the third Gazte Topagune Sozialista (Socialist Youth Gathering) held by GKS and the Ikasle Abertzaleak student organisation in the Basque Country. We were also joined by a comrade from Lucha de Clases, the section of the IMT in the Spanish State of the International Marxist Tendency. GKS is a new socialist youth organisation in the Basque Country, with the aim of building a classless society with a particular slant against the class collaborationist tactics of the social democrats.

The four-day event, under the slogan of Batzen gaituen hautua (‘the choice that unites us’), saw over 2,000 register for political discussions, cultural activities and sports showcases. A very impressive feat, in spite of the difficulties that have been placed on the movement by the official nationalist left. In the run up to the event, the nationalist left had attempted to place obstacles on the running of the event ⁠— with uncertainty days before as to whether the halls would be available. 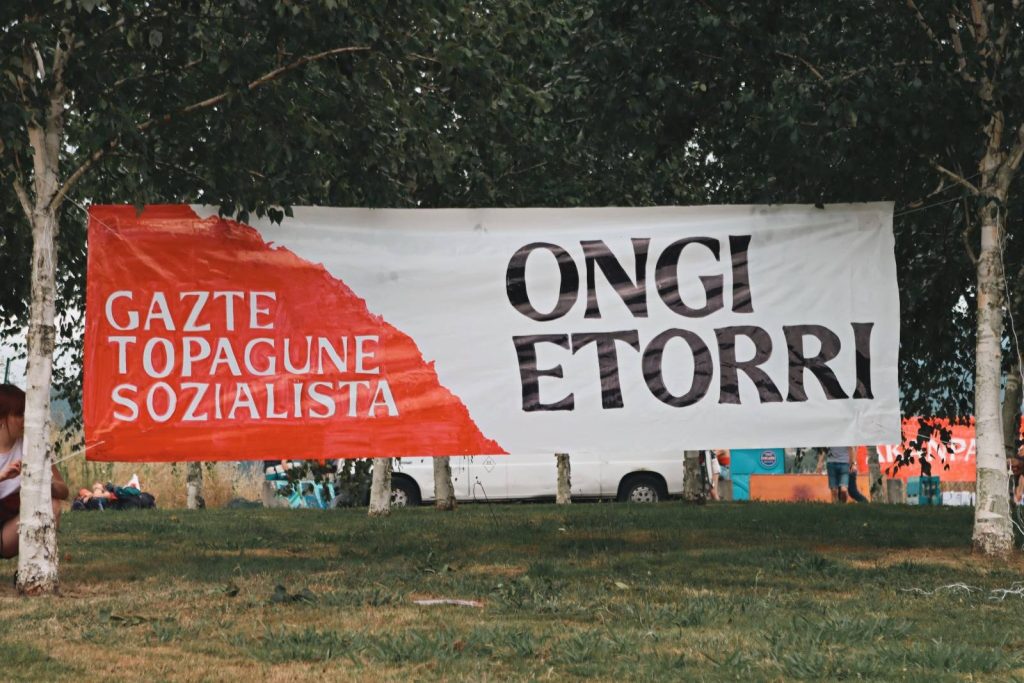 It is important to note that the GKS (Socialist Youth Coordination) emerged about three years ago from a split from the nationalist left movement, which over decades had become a shadow of itself in the significant role that it once played. It is now openly reformist, insipid and institutional. EH Bildu is currently giving crucial parliamentary support to the PSOE government in Madrid. The GKS militants see their role as constructing an alternative based on revolutionary theory and strategy.

The political discussions were varied and wide-ranging, reflecting the work of different fronts through which they work. For example, the first political session was on Ideological and Cultural Struggle, which was introduced by militants that are part of their Ekida. Paraphrasing Marx, one of the speakers made the point that the dominant culture reflects the interests of the bourgeois, and so an ideological and cultural struggle is necessary. This cannot be done in isolation, and must be part of a wider political project.

The second panel discussion was on Socialist Space Networks, which was presented by their front Erraki. The gaztetxes (youth houses) have a long tradition in the Basque Country as occupied spaces through which to organise political activity. Erraki was launched as a network to defend these spaces and break with their isolation. A thorough introduction to the role these spaces have played in the Basque historically was given, with great pains taken to explain the role that the housing question plays in their movement. 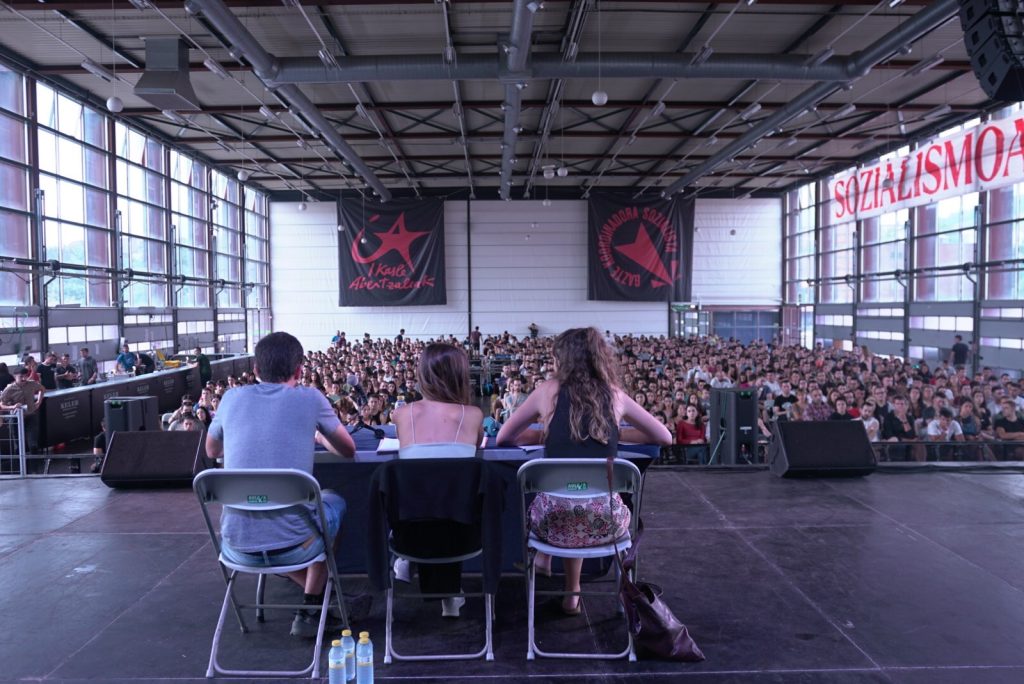 With a clear focus on the most radical layers of society, it was evident that the resolute communist message has reverberated with the Basque youth. We discussed it with a representative of GKS, in which they told us the reasons they thought many were turning their backs on life offered by capitalism. They suggested that there were two main reasons:

“First, the structural reasons connected to the proletarianisation process, which leads the youth to a situation to which their projects in life are limited. Under capitalism, they cannot imagine a better future. They feel closer to communist ideas only if they are correctly defined and correctly expressed. On the other hand, the hard work that is being carried out by GKS.”

They explained to us that the communist militants were carrying out debates, one-on-one conversations, on a daily basis. They emphasised the need to connect the immediate problems facing the youth to the transformation of society along communist lines in a rather transitional manner.

In contrast to the events the nationalist left put on, devoid of political discussion, they were clearly using the topagune as means of transmitting political, economic and strategic ideas. This was used to energise the militants, raise morale, and importantly in order to dispel the myths and slanders perpetuated by their enemies.

They explained two of the purposes of the event was for GKS to “explain with our own voice what we are about,” as well as to “place ourselves on the map, as a serious political actor”. After drawing the ire of the state with GKS organising a 7,000 strong mobilisation in January, they are indeed increasingly becoming a force to be reckoned with. 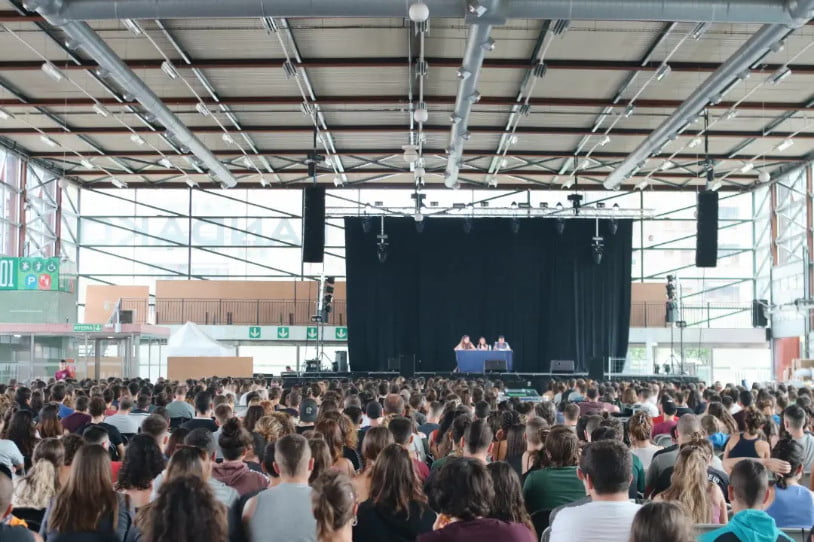 The state has taken a no-holds-barred approach to their repression measures. Not only are they aware of the movement, they are sharpening their tools of repression. We asked for some further details on the means used not only by the state but also by the nationalist left.

They explained that there were two aspects to this question: the criminalisation and the effective repression. Ever since the Topagune in October last year, there have been tougher actions taken in order to stem the tide of radicalism. For instance, some of their militants are facing combined jail sentences for a total of 42 years for taking part in a student strike.

We affirmed that we stand in support of these democratic rights to protest, and that an injury to one is an injury to all. These attacks clearly come from a position of weakness rather than strength on the part of the capitalists.

But it is not only the state that feels threatened by the growth of the Mugimendu Sozialista. The official nationalist left has also been attempting to squeeze the movement through economically blocking their means of raising money. This year they have attempted to bar them from running txosnas (bars) at the yearly festivities in each town and city, which are a crucial source of income for the movement.

A broader point was made in our discussion about how they understand the political repression they have experienced. The comrades told us:

“For a long time, political repression has been understood solely through the nationalist perspective. When the nationalist left explains why the repression is happening, they say it is because we are Basque. This repression is not unique to the Basque Country, however. It is something that happens anywhere where a communist alternative is being constructed and is gaining more strength.”

The splitting away of GKS took place under conditions of failed social democratic strategy on the part of the nationalist left. For a long time, the nationalist left were viewed as taking up the mantle in the struggle for Basque independence. Nowadays, the petty bourgeois leaders of this movement do not even pay mere lip service to it, and seek to negotiate crumbs from the government in Madrid.

The politics and strategy of the reformist ladies and gentlemen are akin to an empty vessel. They make the most noise, demagogically appealing to the Basque masses on identitarian grounds, but with the promise of precious little. As the GKS comrades explained:

“Social democracy in general terms, they do not have a real programme to achieve a socialist society… Besides, they work as the left cover for capitalist interests and provide only that function. This weakens the connection of the working class with politics.”

With capitalism in its deepest crisis in three hundred years, the reformists have no space to manoeuvre. This is not the period of today being better than yesterday, and tomorrow better than today. Quite the opposite. And so the social democrats, weary of their weakening hold, have become all the more vicious and violent in their attacks against GKS.

The militants we spoke to throughout the weekend were abundantly aware of the blind alley of separating the national question from the class struggle. In the third political discussion, on Economic and Political Strategy, a very fine point was made by steering clear of the swamp of ‘identitarian politics’ where the nationalist left moulder.

We asked them about why they thought an ideological struggle against postmodernism and identity politics was important, to which they answered:

“These ideological trends are not the theoretical reflection of a communist politics. They are the cultural and political reflection of other political ideas. This cultural trend is defined by the lack of organisation, by fragmentation and by the idea that universal emancipation cannot be organised in a single project.”

We wholeheartedly agree. The transmission belt of alien class ideas into a communist organisation is a sure fire way of watering down the revolutionary programme, and miseducating the membership as to the aims of revolutionaries. They continued: 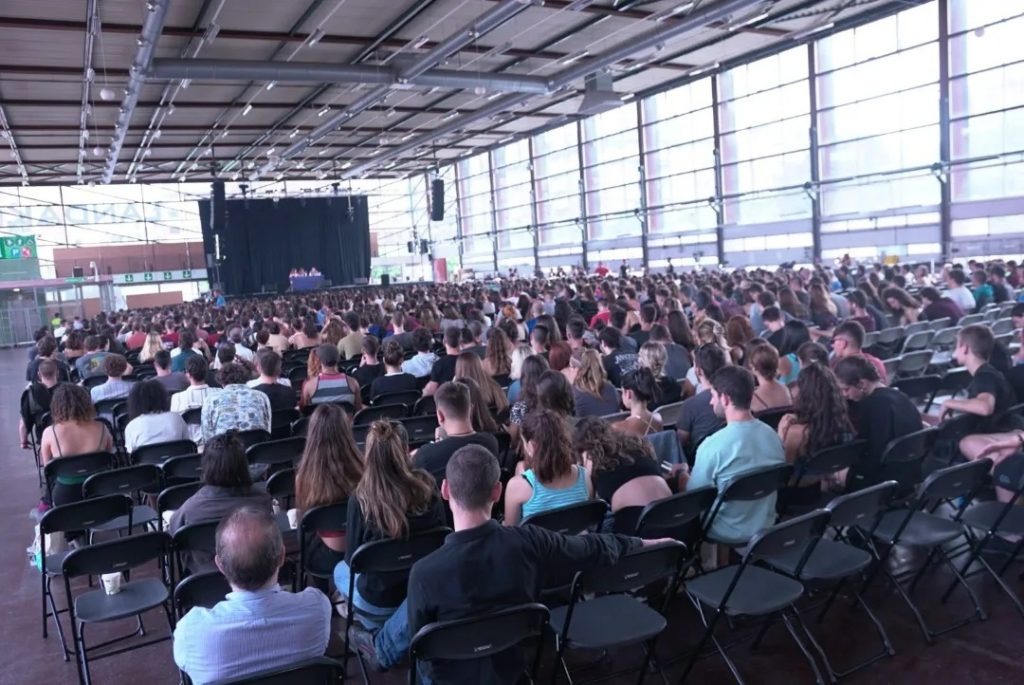 The final political session focused on internationalism, with a panel discussion with communists from Catalonia, Castille and the Basque Country. This was the most impressive and inspiring of all the sessions. The process that has occurred in the Basque Country, with the youth turning their back on the failed strategy of the traditional social democratic parties, finds its mirror image in Catalonia right now. For instance, a similar discussion has led to the formation of Horitzó Socialista (Socialist Horizon) out of the pro-independence youth organisation Arran.

In each of the panel’s contributions, emphasis was placed on the struggle against the nationalism whipped up by their respective bourgeois. The focus should be on the political independence of the working class.

As one speaker noted: “We must break with the system of the bourgeoisie and professional politicians, organising ourselves independently and responding to our own communist roadmap”. This was greeted by an exhilarated applause.

Throughout the weekend, a motivated mood of revolutionary elan and determination was on show. One militant explained to us that the road ahead would be hard and tough, but revolutionary optimism was the order of the day. We welcome these developments in the Basque Country, and used the opportunity to underline our interest in having further discussions going forward on both ideas and strategy.

We would reiterate that anything the Marxist Student Federation, as part of the International Marxist Tendency, can do to support and show solidarity to the communist movement of the Basque youth, we are at your disposal.