Edinburgh Marxists make a great start to the year 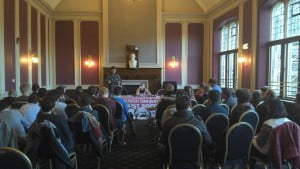 The interest in Marxism appears to be on the rise in Edinburgh after a successful meeting, hosted by the Edinburgh University Marxist Society last week. Up to 50 young students attended the first meeting of the society entitled ‘An introduction to Marxism’ where Socialist Appeal supporter, Adam Booth introduced the key elements of Marxist theory and explained why they are still highly significant today. This came after the society had collected details of over 130 potentially interested students. With the backdrop of the continuing economic crisis, affecting young people disproportionately, it is little surprise then, that this new generation are seeking alternatives.

During his introduction Adam explained that Marxism is a tool which can help us understand the class nature of Capitalism and why such a system has become illogical, backward and crisis-ridden. Capitalism is struggling to cope under the weight of its own contradictions. All over the world the economy continues to fail, no longer able to generate the sort of growth that could guarantee the support and hope of the youth. At the same time, record profits are accumulated and stock-markets continue to rise. The rich are getting richer but instead of moving society forwards, providing greater equality and opportunity for development, across the world are budgets are being slashed, workers sacked and social programmes closed down.

The discussion that followed was extremely healthy with so many points being made from the floor the meeting had to continue afterwards in the pub. The fact that Marxist ideas provide answers seemed to motivate the whole room. Many present were very interested in finding out more, buying literature that was available and looking forward to getting involved with the Marxist Society as members. With Capitalism unable to offer a future, the youth must look to themselves and the rest of the working class as the driving force to achieve Socialism. The development of a thriving Marxist Society in Edinburgh should be welcomed as an important step in this process. 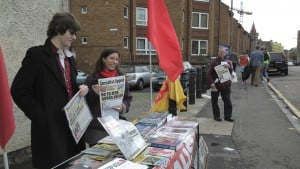