During freshers week, at the University of East Anglia’s (UEA) social action day, the UEA Socialist Society had a chat with Clive Lewis, MP for Norwich South and shadow minister in Labour’s energy and climate team. Clive was one of the first to nominate Jeremy Corbyn in his successful bid to be leader of the Labour party, and is a firm supporter of Jeremy’s leadership. The UEA Socialists were keen to ask Clive some questions about how he saw the fight against austerity moving forward from here. 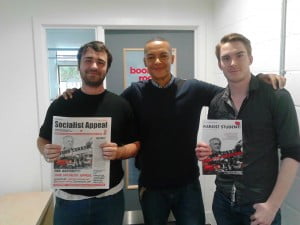 What’s clear is that there’s a lot the Socialist Society and Clive agree on, and the UEA Socialists are looking forward to working with the Labour club on campus to spread the ideas of socialism among students. We plan to throw our full weight behind the calls for unity in the Labour party, and we agree wholeheartedly with Clive when he talks about reigning in attempts from within the party to undermine Jeremy through openly hostile comments and briefing against him. But we are in favour of unity around the ideas and princples that the overwhelming majority of the party voted for in the leadership election. We think that if we are serious about ensuring the PLP respects the democratic decision of the party then mandatory reselection of MPs before a general election is essential. Being a Labour MP should not be a job for life. It should be a job for as long as you are able to represent the views of your constituent party members.

We’re also looking forward to working with Labour councillors who will loudly and unequivocally oppose the cuts, as Clive suggests they should do. But we think that this opposition has to involve a strategy for refusing to vote for cuts in practice, as well as in words. With support from local people and the local labour movement, a Labour council could build a mass movement against austerity from which it could draw the strength to set an illegal budget and refuse to implement Tory cuts. Better to break the law than break the poor.

And finally, the UEA Socialists plan to participate fully in the broad, progressive alliance against neo-liberalism and the Tories that Clive describes. This is certainly the way forward. Within that alliance we will argue firmly that austerity is the product of a capialist system in crisis. There is no going back to post-war capitalism because the system today has reached its limits. To fight austerity we must fight capitalism. We urge all UEA students to join us, in an alliance with the Labour club and all others who want to get involved, in the fight to defend Jeremy Corbyn and fight for socialism.

How do you think Jeremy’s first week has gone?

It’s been mixed. Saturday (the day of the election) was fantastic, but reality soon hit home. And the reality is that Jeremy never had the same kind of infrastructure, links with the establishment and links with the media that the other candidates had. It was much harder for him to hit the ground running. I also think that only a small minority of us in the PLP were really behind Jeremy, and forming a shadow cabinet on that basis is quite tricky, particularly when some members of the PLP have said some quite difficult things. Jeremy has had to compromise on some positions to ensure as much stability and experience in the shadow cabinet as possible. He also wants to reach out to people, to hear their point of view and not to do politics in the old style of I’m the leader, this is how it’s going to be. I do think both Jeremy and the party will get stronger from here.

On that point about the PLP saying difficult things, do you think there’s a case to be made for the basic democratic right of the mandatory reselection of MPs by their constituency parties?

I’m opposed to the mandatory reselection of MPs for a number of reasons. Firstly it’s important to realise that the PLP is not a homogenous group, those who want to actively destabilise Jeremy are, I think, a minority. So as well as being destabilising, bad for morale and causing difficulties for Jeremy while he’s trying to build a team in Parliament based on trust, it would also be, in effect, a declaration of war on MPs who hold different views to Jeremy.

Political dissent within the party is perfectly acceptable – Jeremy himself has held different views to the mainstream in the party for a long time – and often these differences can be put in as supportive a way as possible. But I think briefing against and openly hostile, negative and critical views is something that does have to be tempered.

Remember as well that deselection cuts both ways. It would be perfectly possible for good Left MPs to be deselected thanks to a campaign to undermine them being conducted by right wing party members at a local level, especially if they’re away from the constituency, doing campaigning work etc. for a lot of the time. It’s not something that just affects those MPs who don’t support Jeremy.

If local parties want to deselect their MP there’s a process already in place for that. Automatic reselection is a recipie for instability and it’s not something that I’d support.

Corbyn was elected on an anti-austerity mandate, and yet in places like Norwich we’re faced with a Labour council being forced to implement Tory cuts. Do you think Labour councils should be setting illegal budgets as a way to fight austerity?

Jeremy’s been clear on this – he won’t endorse councillors who set illegal budgets. If we did do that we’d effectively be handing over control of the council budget to central government. I don’t think that’s in the best interests of my constituents because I’ve seen how the Labour groups on the city and county council have ameliorated, mitigated and managed the cuts as best they can. In this respect councillors can make a big difference. When the Tories were in the county council the cutting was brutal – they decimated youth services without giving a damn, as far as I could tell. The difference between Labour councillors and Tory councillors is the difference between a scalpel and a scythe. A kind, considerate, caring, socialist Labour council will minimise the impact on the poorest and most vulnerable.

But I’d also point out that it’s now incumbent on those same councillors to be at the forefront of the struggle against the cuts. They need to say loudly and unequivocally that we are no longer the party of austerity-lite. We’re not just talking about fewer cuts – we are fundamentally opposed to these cuts.

John McDonnell, the new shadow chancellor, has in the past expressed an interest in “fomenting the overthrow of capitalism”. To me, fighting austerity and fighting capitalism are one and the same thing. How do you feel about that?

I’m a democratic socialist, not a revolutionary. I think everyone agrees that the version of capitalism that we had after the second world war up until 1979 was infinitely better than the aggressive, neo-liberal model of capitalism we have now. We need to focus on what we all agree on which is that we need to move forward to something that can geninely work in the best interests of the poor, the vulnerable, the environment etc.

I think we want to build a broad, progressive alliance against neo-liberalism and the Tories. I’m sure not everyone on the Left will always agree on everything, but let’s agree on that and work towards it. It may be that further down the line we find we can’t agree on certain points, but let’s cross that bridge when we come to it. For now let’s bring the broadest range of people together so that, after such a long time on the back foot, we can take some steps forward.