Published by Marxist Student on November 11, 2016

There’s an old Chinese curse which roughly translates into English as “May you live in interesting times” and it certainly seems that in recent months these words do make for a particularly painful curse. 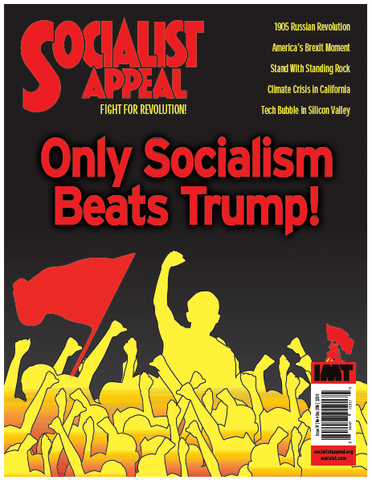 It seemed laughable this time last year that there was any chance of a Donald Trump presidency after this year’s US elections, however here we are faced with the prospect of four years of just that. It’s now important for us to understand not just how this happened but also what it means for us as socialists.

It’s fair to say that among Marxists, not to mention many of the millions of Americans who didn’t cast a vote in this election, Hillary Clinton and Donald Trump were seen as two sides of the same corrupt coin. It’s for exactly this reason that Trump’s victory can be looked at with great interest by the Left. Trump used a very similar style of tactic used by Nigel Farage and UKIP in the UK, claiming to be standing against the establishment and on the side of everyday working class people. In the absence of any genuine alternative provided by the Left this clearly resonates with people. But, like Nigel Farage, Trump is part of the very same establishment and ruling elite that he claims to be standing against.

This type of tactic should be studied thoroughly. It would be incorrect to say that Trump won because his wild rhetoric and xenophobic stance resonated with every voter who supported him, this may apply to a small percentage of that vote, but it’s increasingly clear that many working class people in America voted for Trump precisely because what he was saying was different and an assault on traditional politics. Alongside this, many voted for him out of sheer mistrust and hatred of Hillary Clinton and the boring mire of establishment politics which she represents and makes no effort to hide. This idea of going against the bourgeois grain, so to speak, also found expression in Clinton’s rival for the Democratic candidacy, Bernie Sanders.

Though Sanders in himself was not revolutionary, he took a left-wing stance which was outside that of mainstream capitalism and it went down astoundingly well, especially among young people.  At one point Sanders was even leading Trump by double figures. Some young voters even claimed that after Sanders failed to receive the Democratic nomination they would vote for Trump rather than Clinton. It seems that the frustration at the neo-liberal politics of today is most prominent in younger people.

This is a sign that there is an urgent need for a revolutionary alternative on the Left, not just in America, but around the world. But what can we learn from this election?

Firstly, it’s possible to draw a comparison with an idea proposed by Leon Trotsky about the tactics involved in a working class movement’s use of bold slogans. Though the slogans of our movement are a far cry from those of Trump’s, the idea that the system needs fundamental change is the same. Trump’s “outsider” status, bolstered by his own party’s obvious contempt for his candidacy, drew in millions of voters and added to the illusion of him being “anti-establishment”. But there is a huge difference between genuinely offering an alternative for working class people and simply making demagogic statements. We can offer a genuine radical alternative, and now we can be confident in doing so because Trump has proven that there is a genuine appeal in throwing caution to the wind.

Most importantly, it’s become blatantly obvious that capitalism and the cosy “centre-ground” elite whom it benefits is failing to win the support of millions of people worldwide, this demands a working class alternative!

A movement of the working class must be built in the United States and across the world as a genuine alternative to the politics of Trump and Clinton. A movement that will see the end of capitalist exploitation and the lies and deceit that it’s built upon and a world which actually works for the many. The fear, bigotry and xenophobia upon which Trump has built his campaign and which capitalism thrives upon must be countered at every opportunity.