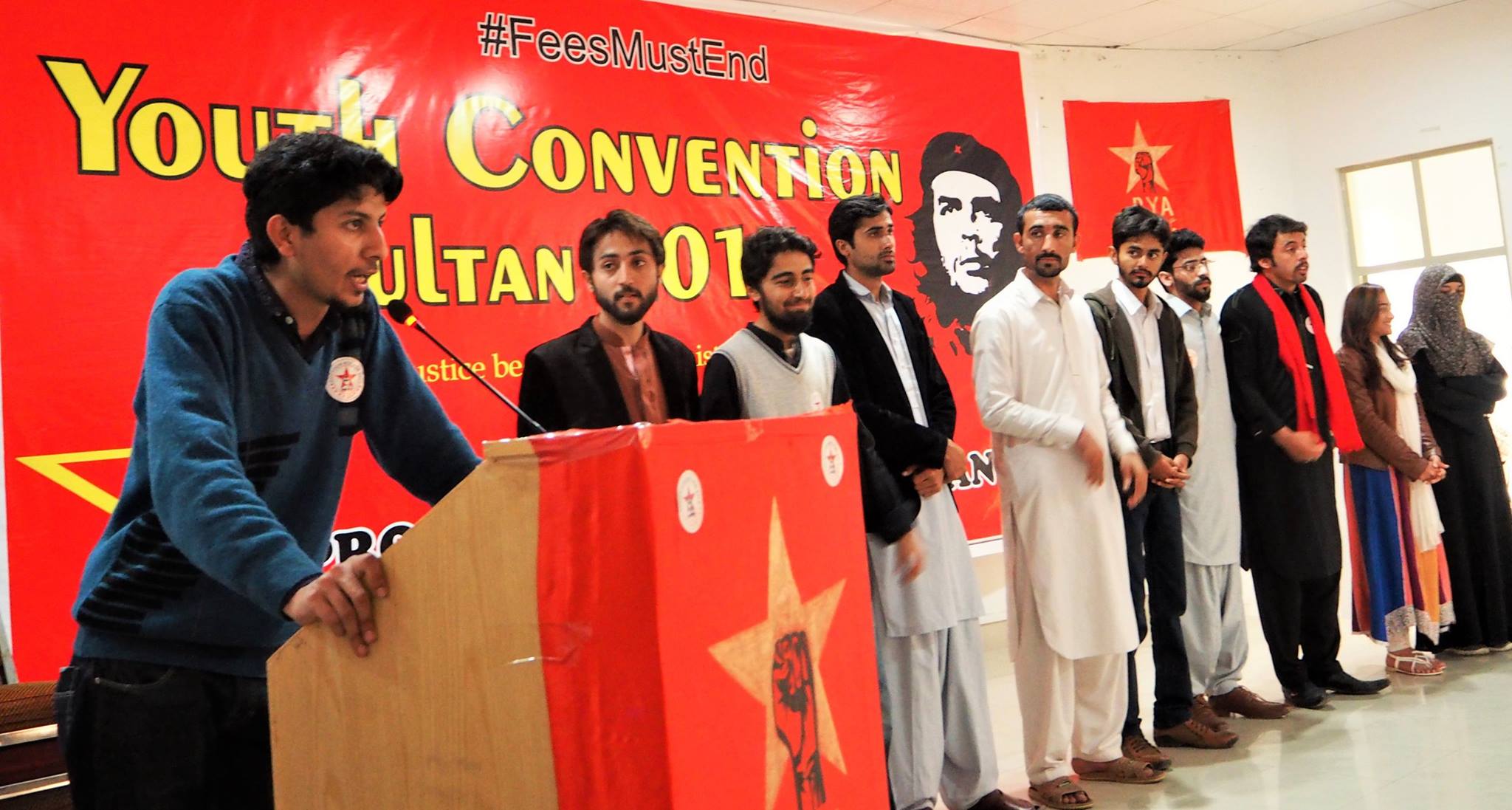 On 17 February the Progressive Youth Alliance (PYA) organised its city convention of Multan at the Multan Tea House hall. More than 200 students from various colleges and universities of Multan participated in this meeting. Representatives from various educational institutes of other cities also came to witness this important meeting. Just one day before the meeting a suicide bomb exploded during a protest in front of Punjab Assembly in Lahore, killing more than a dozen people. Therefore, the mood in Punjab was tense. But the PYA students were determined to carry out their planned activities and did not hesitate for a moment. A separate banner was placed in the hall to commemorate the centenary anniversary of the Russian revolution. The PYA will organise various activities during this year to celebrate this anniversary of one of the most important events in human history.

The opening speech of the convention was made by Fazeel Asghar, who is a student at Bahauddin Zakariya University (BZU) in Multan. He outlined the aims and objectives of the PYA and the tasks of revolutionary students today. After comrade Asghar, other speakers addressed the meeting to speak about the current state of student politics in Pakistan and how to move forward. The speakers were Asif Lashari from D.G.Khan; Shakira, a female student from BZU Multan; Atta-ullah from the Federal Urdu University Karachi; Arbaz from Kashmir; Waqas and Rawal Asad from Emerson College Multan; Ameer-ullah from the FATA council of BZU Multan; Kareem Jamali from Dadu; Shay Razai from UET Lahore; Hidayat-ullah from South Waziristan; Ishfaq Gujjar from Islamic University Bahawalpur; Umar Riaz from the Islamic International University of Islamabad; and Zareef Rind, the organiser of the Baloch Students Organisation (Pajjar) and general secretary of PYA. Anjum Saeed, a leader of the Railway workers union, also spoke at the occasion and expressed his solidarity with PYA.

The speakers explained the problems faced by students in colleges and universities and how a ban on student unions is hurting them. They said that “security” has been used as an excuse to turn the educational institutes into prisons. Fee hikes are yearly and are not regulated in any way. This means that millions of youth from working class families are being denied the right to receive an education. A large part of the population has no access to basic education and those who are lucky enough to achieve primary education are for the most part denied the right of higher education – even if they perform better than students from wealthy families. For students of higher education, the problems keep mounting up. There is no proper accommodation or transport for students, and even the quality of education is deteriorating every day. Students are forced to live in private hostels where huge sums are extorted from them. Co-curricular and extracurricular activities, which used to be a basic thing at campuses, were abolished a long time ago, their place taken by a flow of drugs which is easily available. Unemployment and lack of educational opportunities also means that many young people join criminal gangs. The ruling class is content with a situation where students take up crime and drugs instead of politics. 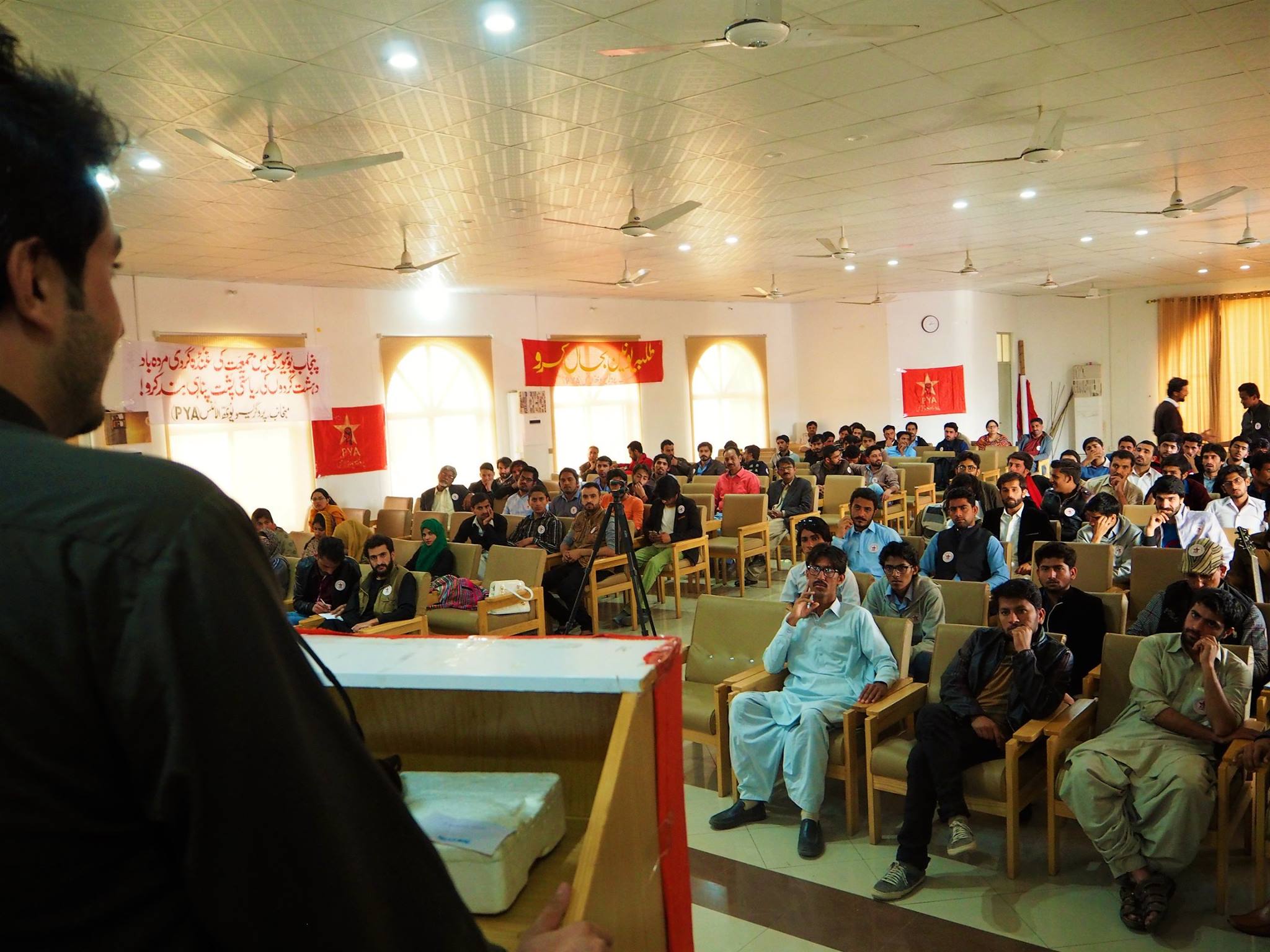 History of the student movement

This depressing situation is the result of state policies for past four decades. During the brutal dictatorship of Zia ul-Haq, student unions were banned while religious fundamentalist organisations were encouraged to get a foothold on campuses. The fundamentalist organisations were backed by the US and the Pakistani state to fight against Soviet influence in Afghanistan. The authorities provided all kinds of support for these groups such as arms and organisational backing. The financial backbone of these organisations was the heroin trade. That was how heroin was first introduced on the campuses by the religious organisations. The US and Pakistani ruling classes also used the university campuses as recruiting grounds for their “dollar Jihad”.

After the collapse of the Soviet Union left-wing student organisations collapsed and left the vacuum to be filled by right-wing organisations. Student leaders of these organisations were involved in all kind of criminal activities from land grabbing to extortion. Hence, the name of student politics was blackened to a large extent. The ruling class used this as a pretext to keep the ban on student politics intact, saying that student unions lead to crime and nothing else.

But student politics was the breeding ground for revolutionary politics in the 50s, 60s and 70s. Many left wing leaders of Pakistan started their political life on campuses, attending study circles and discussing theoretical texts such as The Communist Manifesto and State and Revolution. The 1968 revolution against the Ayub Khan dictatorship was in fact sparked by the killing of a student in Rawalpindi after which student protests throughout the country took to the streets against the Field Marshal. Later on, the trade unions joined the movement. 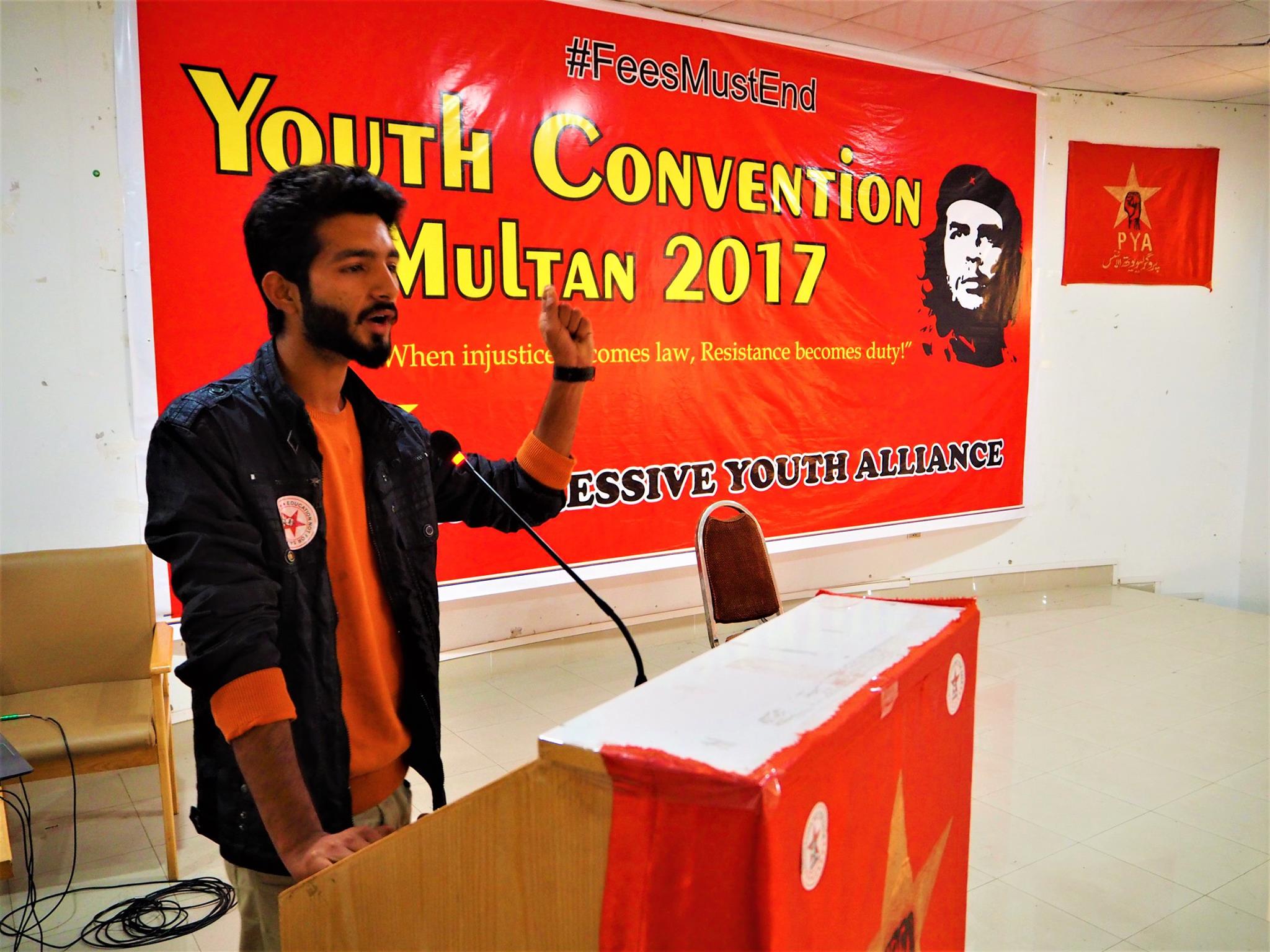 The speakers at the PYA conference said that this convention is the beginning of a new chapter in student politics in Multan. The students of this important city are now fed up with the reactionary gangs of Islami Jamiat Talba, an Islamic fundamentalist student organisation which is active in Multan. Despite the ban on student organisations this organisation has the full backing of the Pakistani State and university managements. Whenever students raise their voices against the cruel management or in defence of student rights, the gangs of this reactionary outfit are used to beat them up and sometimes even to kill them. But now the real horrific face of this organisation has been completely exposed and all students hate it. The organisation is no longer able to recruit students from the campuses so it is resorting to bringing criminals from other cities and getting them fake admissions in order to carry out their criminal activities.

Other left-wing student organisations have long ceased to exist. The student wing of the PPP called the Peoples Students Federation, which had the largest mass base among students in Multan, has already splintered in dozens of groups after having been entangled in all the corruption and the looting and plundering which took place during the five years of Zardari-led PPP rule.

The task for the students of PYA now is to utilise this vacuum which has developed in the student movement to spread the message of revolutionary socialism amongst a wider layer of students and organise them in the fight against the forces of black reaction and rotten Pakistani capitalism.

During the convention many young poets also took the stage to enthrall the audience with their revolutionary poetry. These poets include Akhtar Munir from the Agriculture University of Faisalabad, Abid Malik, Yasir Faree, Qamar Farooq and Karim Parhar from the Pashtoon Students Federation in Quetta. Rooman Malik and the Red Beetles sang revolutionary songs which brought the audience to their feet. A drama club called Nautankar also performed a short play at the end of convention. In the play they highlighted the problems faced by students due to the poor standards of the education system. Comrade Mahbloos Asad was the stage secretary.

At the end of Convention a new executive body for PYA Multan city was also announced. Comrade Giand Baloch from BZU was elected president of PYA Multan, Tooba as Vice President, Ammar from Emerson College as General Secretary, Yunas as Joint Secretary, Fazeel Asghar as Information Secretary, Asad as cultural secretary, Ameer-ullah and Umair as Study Circle officer, Shakira as Women’s secretary and Waqas was as Finance secretary. Comrade Zain ul Abideen, the national organiser of PYA took an oath from these newly elected executive members of PYA Multan.

In the end comrade Zain made the closing speech of the convention. He said that the enthusiasm and passion which we have seen today has given us new energy to carry our work forward. Comrades of PYA in Multan have held many activities for the preparations of this convention. They have organised many registration camps outside important educational institutes and registered hundreds of students. They also organised meetings on various topics in universities and colleges in which a large number of students participated. They have raised the necessary funds for this meeting through appealing to their sympathisers in the city. This was a huge task which seemed almost impossible to begin with. But the success of this convention clearly shows that our message is getting an overwhelming response from the students. But this is just the beginning and we have to bring many more students to this platform and organise them on the basis of the ideas of revolutionary socialism. The PYA will organise similar conventions in other cities and aims to spread the organisation to all corners of the country. We are already in contact with revolutionary students of other countries world and extend our solidarity to their movements and struggles against the evils of capitalism. Our task is to overthrow capitalism through a socialist revolution and we will not pause for a moment until final victory!

After the convention a rally was organised against the ban on student unions, for free education and against the state sponsored Islami Jamiat and the violence it spreads in the educational institutes.