Stop the student debt sell off!

Since the introduction of fees and the cutting of grants, the influence of big business and the market on higher education has been steadily increasing. The capitalist crisis engulfing Britain and the world since 2007 demonstrates that the market is incapable of providing quality education and public services in general. Danny Alexander’s proposals on the privatisation of student loans and existing debt is further proof that nothing is safe from privatisation and profiteering, even debt from previous loans. This latest attack means £40 billion of debt composed of loans to students from 1998 to 2012 is to be privatised as part of the £11.5 billion additional cuts announced in the last spending review, and affects up to 3.6 million students and former students.

The privatisation of loans necessarily means an increase in interest rates to make them more profitable investments for financiers. Interest payments, which currently average £40,000 for students starting today, may more than double. Scandalously, under these plans the earnings threshold for commencement of repayments will likely be lowered from £21,000 to £18,000. NUS policy has failed to shift government on fees. A far more sustained, militant and political campaign that mobilises the millions of students and ex-students that stand to lose from this privatisation must be organised by the NUS. Ultimately capitalism and profit seeking are in direct contradiction with free education as a right for all. Only a democratic socialist system of public ownership can provide higher education for all.

Despite these attacks British business is sitting on an incredible £800bn accumulated profits that they refuse to productively invest.

The UAL Marxist Society and the Marxist Student Federation calls on the NUS to:

See our leaflet for the demo here (click to enlarge): 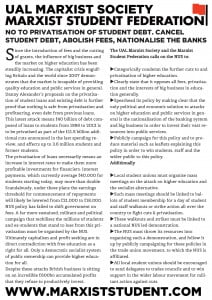