Published by Marxist Student on September 8, 2020

Today, a group of school students in a Sheffield school have been forced back into isolation after two of their classmates tested positive for COVID19. This has come after a campaign from the teacher’s union, NEU, claiming that there were not enough safety measures in place to stop COVID19 spreading throughout schools.

Less than one week into students returning to schools, and critics of the government’s plan have already been proven correct. This comes as no shock, given that the decision to reopen schools was nothing to do with scientific evidence that this would be safe, nor even a moral imperative to have young people back in education, as Johnson claimed. The reopening of schools was a policy linked entirely to the need of the capitalist economy to get parents (workers) back to work.

A mistake or a horror of capitalism?

Coronavirus has been detrimental to what was clearly an already suffering economy. The capitalist economy was already in crisis at the start of 2020, and coronavirus has acted as a catalyst in its descent. The Tory Party’s aim is to defend the needs of British capitalism, and this has been exposed, more obviously than ever before, during the corona-crisis. Sunack’s policies have handed out public money to big business to keep them afloat. We know that it is the working class who will be forced to pick up the cheque for this when the time comes. The Johnson government has tried to force the economy to open up at every turn, without adequate safety measures and testing, in spite of the advice from scientists and health professionals

The reopening of schools is no exception to this. Johnson has claimed that he’s opening schools in order to make sure students have their fair share of education and don’t miss opportunities. Despite the fact that no such equality of opportunity exists under ‘normal’ periods of capitalism, this rush back is certain to accelerate the spread of the disease, and as we’ve seen in Sheffield, send students home regardless. Johnson’s real aim, and one which is not very well hidden, is to get the economy back to normal – an impossible task.

The hope of the government is that if students go back to school then parents will go back to work. This will restart the businesses which are struggling to stay afloat due to less foot traffic in the cities, or so they hope. This plan already starts to fall apart with the isolation of these students in Sheffield, as well as some in Leicester, Newcastle, Durham and Bolton. Already, we are seeing not just the huge risk the Tory government is putting us under, but the incapability of this plan to even succeed by its own measures. As these students isolate again, their parents will be forced out of work and back home, meaning any gain made to the economy is lost. The Johnson government has resided over a series of bad decisions, U-Turns and crises and the isolating students in Sheffield show another crisis on the horizon.

Which way out for capitalism?

The Johnson government is extremely fearful of having to suggest another lockdown. This would further the collapse of the already broken economy and many of his rich friends would lose their businesses. This is a sticky situation for capitalism, with a wall of horrible consequences presenting itself after every decision made by the government. There is no way out for capitalism and no one knows this better than the capitalists.

Johnson hopes his election as Prime Minister was just a dream and he will kick the can down the road until he can wake up from this nightmare. The nightmare, however, is real, and there is no solution he can offer us.

Many school students will be up in arms about being forced back into isolation at the fault of the government. This year has been marked by social unrest and this is another spark in the fires of anger coming from young people. Capitalism, and this tory government that defends it, have put us all in danger time and time again.

Join our meeting to find out how to fight! 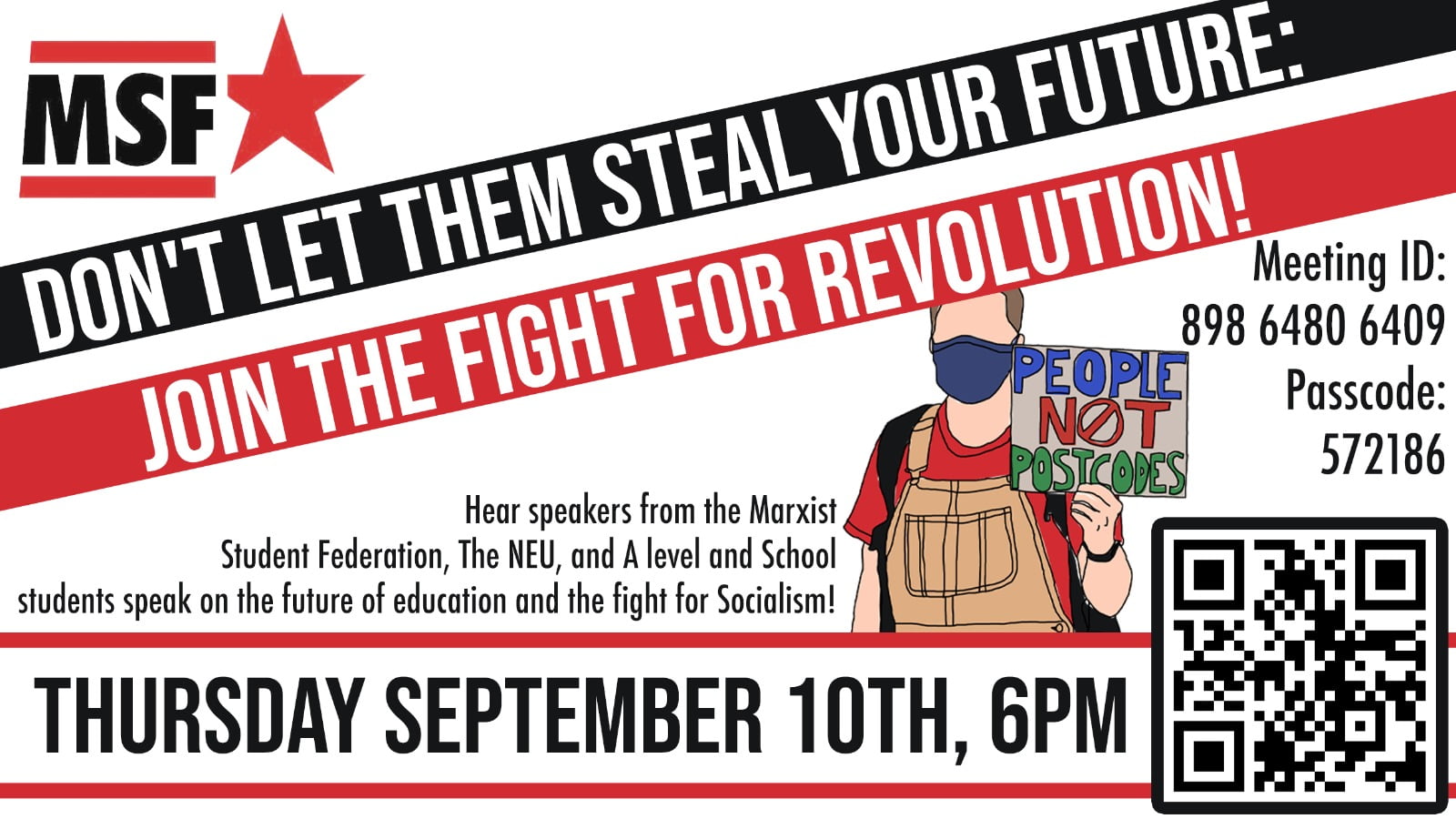