Sam Miller, a first year student at the University of Cambridge and a member of the Cambridge Marxist society, tragically passed away recently. We publish here Sam’s obituary, written by his friend and fellow Marxist, Moses Levi. 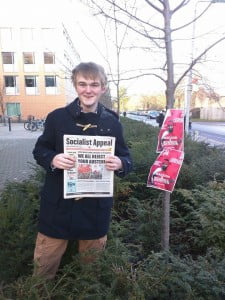 Sam’s death is a huge blow both personally and politically. It seems cliché to say that he was loved by all, but it is absolutely the truth.

It was impossible to avoid being friends with him. His vulgar sensibilities were infectiously funny. You might not introduce him to your grandma, but over a few pints he would leave you in stitches. He had a remarkable ability to form firm friendships almost instantaneously, and myself and many of the comrades from the Cambridge Marxist society and the rest of the Marxist Student Federation were lucky enough to have been included amongst their number.

Sam’s vivacious personality was coupled with a serious and professional attitude to political work. He a very young comrade, politically speaking, but with clear potential. Like many others, he had joined the International Marxist Tendency (IMT) through the Cambridge Marxist society. He was not in the organisation long before his illness forced him out of political activity, but for that short time he would often lead from the back, so to speak, pushing the more experienced comrades to step out of our comfort zones.

Sam made his first recruit to the IMT within weeks of joining, and hence leaves behind a political legacy personified in the new generations of communist militants. This on its own shows his enthusiasm for the work of building the IMT. When, less than a week after he joined, I suggested – almost as a joke – that we do a Socialist Appeal paper sale at 9am on the Sidgwick site (a campus area of Cambridge) every Monday morning, I found myself, at his insistence, doing a paper sale on the Sidgwick site every Monday morning. Followed by coffee and cereal at mine. It was the best way to start the week.

I was overjoyed to hear that Sam was to return from his intermission (temporary leave for unwell Cambridge students) a term early, and on a course he was keen to do – Human, Social and Political Sciences – rather that Theology, which he hated. We were going to live in the same building, 30 seconds apart, and with another IMT comrade just down the corridor from him. We would have had a ridiculous amount of fun. It would have been terrible for my education. It’s horrible that this won’t happen. I miss our early paper sales. With Sam gone, we have a lot less to look forward to in October.

I have passed on the news to a few comrades and friends of ours, although I have not borne the brunt of this miserable task. But I have done enough to know that it was not just me who felt this way about him. Everyone is shocked, everyone is grieving.

My partner Ellie, also a member of the IMT, would often remark how comfortable Sam made her feel, something that does not come easily to her. ‘I still don’t’ feel like it’s real. My memories of him feel like only yesterday. I remember once, as comrades stood to sing the Internationale after a party, he turned to me and whispered – “I don’t know the words!” He then started to sing them perfectly. He was weird like that. I can’t believe I’ll never see him again. But we can draw strength from this tragedy. Now I am more determined than ever to fight this wretched system, the system which causes this cruel disease that myself and so many of my friends have suffered from.’

Others I have spoken to have commented on his straightforwardness and honesty. He was extremely modest, something that is rare in Cambridge, city of careerists. He did not have a trace of careerism. He simply wanted to be as useful as possible, to do humanity as much good as he could. He burned with a deep anger at the crimes of the capitalist system.

This passion, this modest professionalism seemed to stand in contradiction to how ridiculously fun he was. The last time I saw him was at a fundraiser for May Day. He’d come back from intermission (sick leave from Cambridge) for the weekend and was staying with another comrade, Sonny Butterworth – Sam’s recruit. We were all extremely happy to see him. We had a big meal, and the pair of them – Sam and Sonny – brought pudding. They brought more pudding than I’ve ever seen in my life. There were ten of us, all of us were eating loads, and there was still enough food for me to give half the leftovers to my neighbours and then live off donuts and Sainsbury’s basics battenburg cake for a week. It was absolutely ridiculous. Classic Sam. Generous and vivacious to a fault, to a farce, even. He was such a wonderful person, such a wonderful comrade. It is a horrible duty to pass on the condolences of the IMT to his family and friends, but it is a duty we are proud to perform.

‘Life is beautiful’, wrote Leon Trotsky in his Testament. ‘Let future generations cleanse it of all evil, oppression and violence and enjoy it to the full.’ Sam understood the necessity of this. It is a great tragedy that he will no longer stand beside us in our struggle. We have been robbed of a great comrade and a great friend. The robbery is cruel, but we must go on. To the same degree that his loss makes us weak, our resolve to tear down the wicked capitalist system grows stronger. We go forward with his name emblazoned in our hearts and on our banners.

Sam’s funeral service and burial will take place at the Chapel at St. Margarets’s Cemetery, Maidstone Road, Rochester ME1 3DD on Wednesday 22nd July 2015 at 10.30am, and is open to anyone who wishes to say goodbye and to celebrate his life. The family have asked attendees not to wear black. 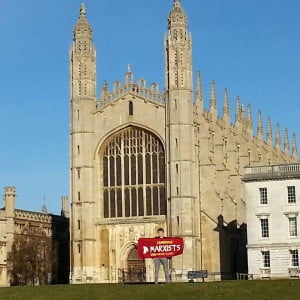