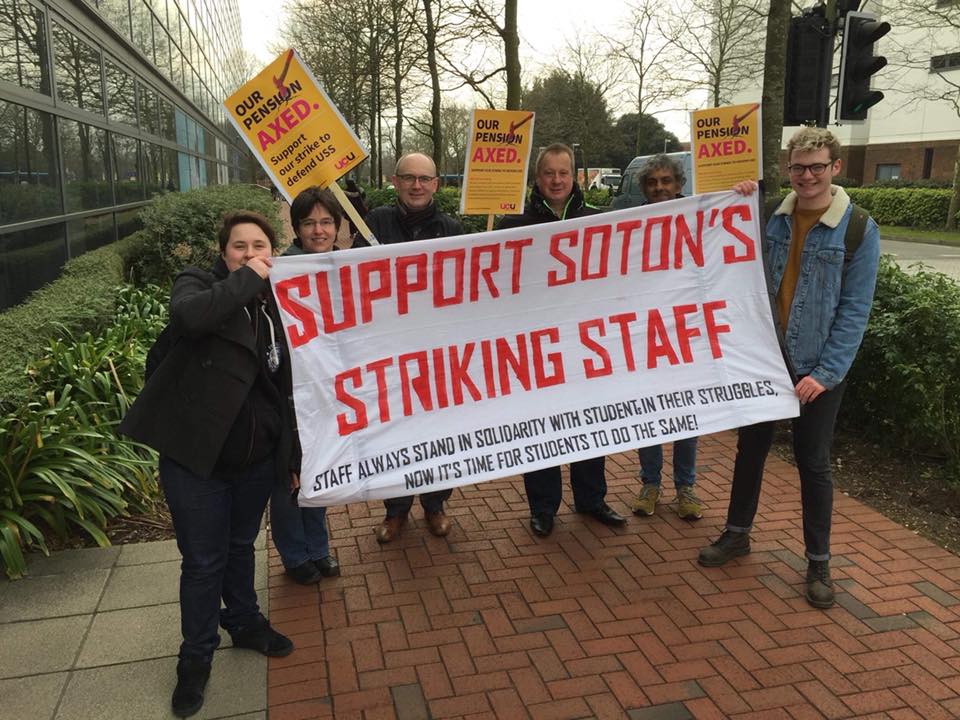 At Southampton we have witnessed attacks by the Vice-Chancellor on our education since he arrived 3 years ago. He first attacked the support staff at halls accommodation, then cleaners and security and most recently in November announcing cuts to lecturers and a restructuring of the university.

In response to the lecturer cuts, we created the Southampton Students Against University Cuts (SSAUG) group along with other left leading students at Southampton to create a campaign group. Using this and the Marxist society we made links with all the unions on campus (UCU, Unison, Unite).

This is how we have been supporting our staff on the pickets, for teach outs and other meetings before the strikes. This is in order to save PASNAS, the final salary pension scheme, which the university senior staff plan to end. The Student Union, which generally acts as a tool of senior staff, voted to support the strikes, and there are some sabbaticals and candidates in the Union elections who are opposed to the changes in pensions. However, although the Union has voted to support it, they also committed to ‘mitigating the impact of industrial action on students’.

The pickets have run till midday each day when a rally is held with all the picketers gathering. We have live-streamed them every day since Friday. On Monday 26 February there was a large rally featuring speakers from several different unions. Staff and student turnout at this was around 125. The mood is always lifted when people see the amount of support there is when everyone is together. In the afternoons, staff organize teach-outs on strike-related issues. The Marxist society contributions have been well received, as have the demands for a free and democratic education. The mood at the pickets is positive and staff are very happy to see student support.

On Monday 26th there was an attempted occupation of the Vice-Chancellor’s office. The Marxist society was part of the outside team, with our aim to quickly spread the message about the occupation on social media and among students. The students taking part in this were committed to staying in the office for as long as possible until their demands were met. Their demands were mainly for the VC to ask UUK to return to the negotiating table, to take a huge pay cut, and for the uni to scrap changes to PASNAS, with the ultimate aim to ensure cuts cannot occur again.

The occupation was successful in that it forced the VC to come out of his office and engage directly with the students who demanded answers about why university management is treating our lecturers in this manner. However, security seemed to have been anticipating an occupation for several days and the top floor of the building (offices of senior staff) could not be occupied. We’ll see if there’s another attempt in the near future. 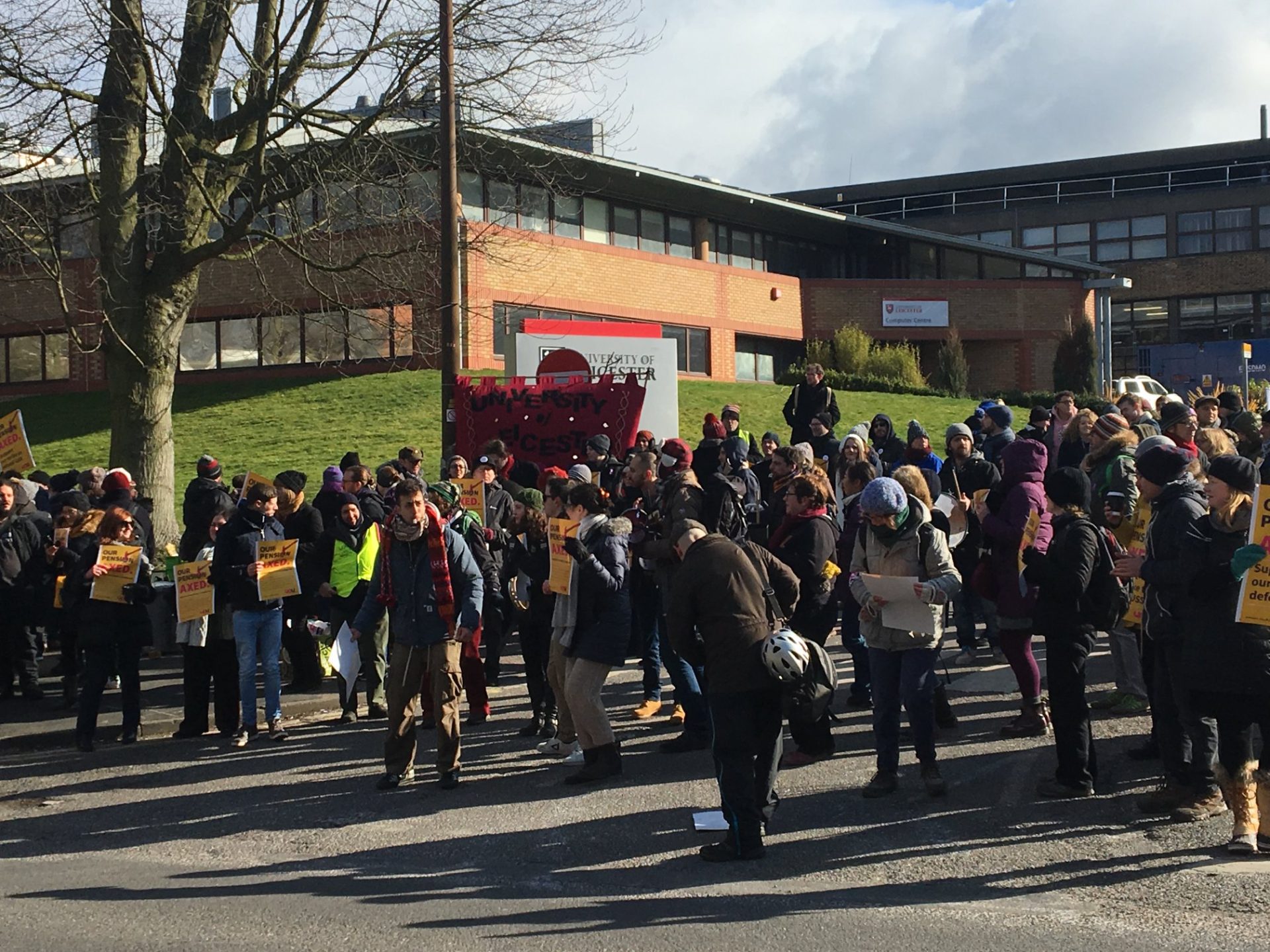 The picket lines this morning were excellent. The Leicester Marxists sent another delegation to the picket lines. There were about 20 on the geography/geology picket where I spent the majority of the time in the snow as I know the most staff there. There were apparently between 10 and 40 each on the other 6 pickets. Numbers have grown over the weekend, in part thanks to better organisation but also there is an increase in striking staff as more decide to go on strike. At around 11.30 the pickets joined together and we marched around the campus to the sound of whistles, drums and vuvuzela stopping outside the Vice-Chancellor’s office to make some noise. Unfortunately he was not in, having not recovered from his paid trip to Fiji for an education conference. People were very thankful for the student support and plans are afoot for more militant action as the strike action develops.

Quick report from the pickets at King’s College London.

In the past many students at KCL could perhaps have been characterised as not especially politically engaged, which made the turn-out yesterday all the more incredible. There were ebbs and flows, but at its peak (a rally at 1pm) there were 100 students and staff present. In spite of the cold, the mood was excellent.

I was one of the speakers at the rally. I put forward a revolutionary argument, and it was very well received. I’ll also be speaking at a ‘teach-out’ today, called ‘Education is Broken: the Case for Revolution’.

Today there’s a large, joint demo between lecturers and cleaning staff at which the Marxist society will have a strong presence.