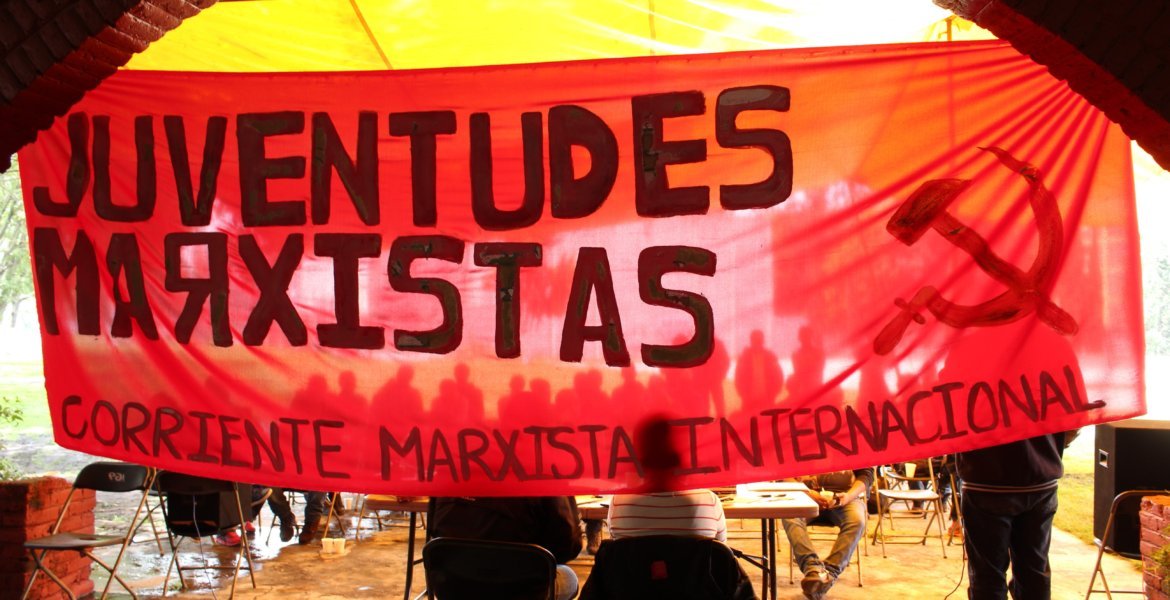 On 8-9 July, the comrades of Juventudes Marxistas (Marxist Youth) and Izquierda Socialista (Socialist Left) organised a camp to celebrate the centenary of the Russian Revolution of 1917, an historic event which showed the potential of the working class to take power, eradicate oppression and build an alternative to capitalist society.

The October revolution, and the formation and development of the Bolshevik party, provide timeless lessons that are worthy of discussion so that we can learn from history for the revolutionary struggle today.

The event took place in Mexico City, in a sports centre owned by the Mexican Electricians’ Union. Community and political organisations were invited to attend, along with young people, students, workers, and anyone else who wanted to come along.

In advance of the camp, groups of comrades ran big publicity campaigns in various parts of the city, in schools and public spaces, where we handed out leaflets, posters and talked to people about the event. We also invited young people, students and workers from demonstrations, public assemblies and meetings to attend the event. 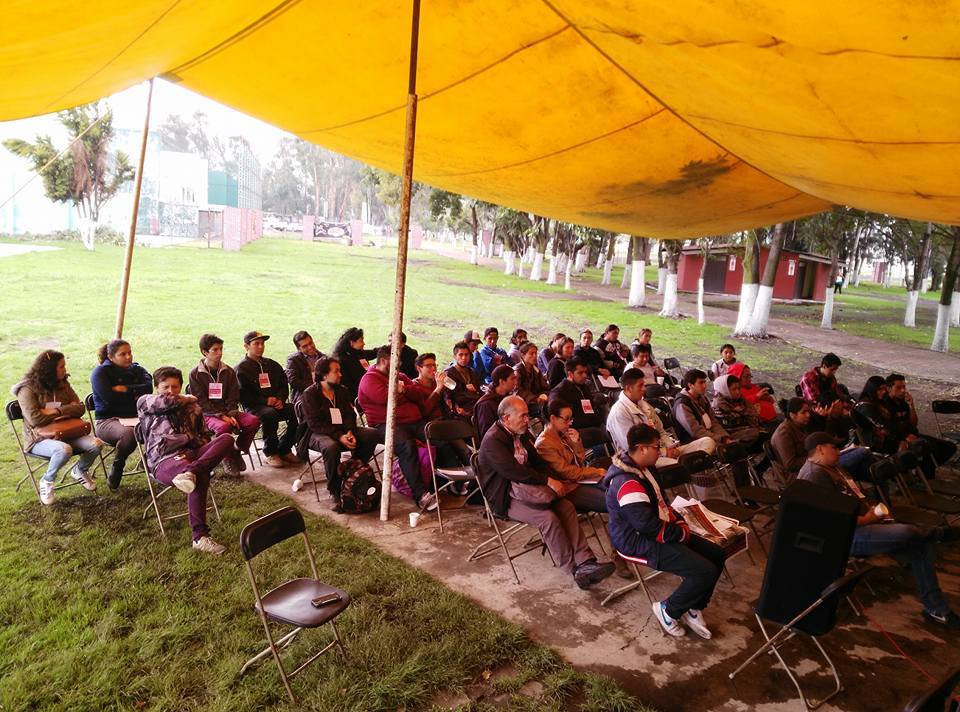 Early on the morning of Saturday 8 July a group of comrades got to work preparing the venue, while others came from various locations around Mexico City, to arrange the food, to sort out logistics, and to prepare for the political discussions and the cultural activities. The resulting first ever Marxist camp was a product of the collective work of young comrades and sympathisers who have committed to building Juventudes Marxistas.

From 9am groups of comrades began to arrive at the venue and register. Gradually the comrades arrived with the food and other equipment for which they had been allocated responsibility.

The day started with comrade Ubaldo Oropeza, leader of the Mexican section of the International Marxist Tendency, introducing the discussion on ‘100 years since the Russian Revolution’. He talked about the social and economic conditions of tsarist Russia and the various political forces that participated in the revolution, paying close attention to the role of the Bolshevik party. Ubaldo’s lead-off touched on the “dress rehearsal” of the revolution, which was the 1905 revolution; the period of reaction that followed the defeat of that revolution; the rise of class struggle up to 1912; the First World War; the February revolution; the rise of the Provisional Government; the so-called ‘July Days’; and of course the taking of power by the working class and the Bolshevik party during October 1917, which overthrew the bourgeoisie and began the task of constructing socialism.

The introduction was followed by a thorough discussion which touched on a number of points in more depth. These included the 1905 revolution, which was a practice run for the triumph of the 1917 revolution; the effect of the First World War on Russia; the development of capitalism in Russia; an analysis of the soviets; the theory of combined and uneven development; Russia before 1905; the role of Lenin and Trotsky in the revolution; the rise of Stalinism, etc.

Contributions to the discussion were made by members and sympathisers of Juventudes Marxistas, as well as youth from the February 25 Democratic Schools Front and the Modern Times Collective.

After the discussion, we had lunch. The food was flawless, and was prepared entirely by the comrades themselves.

Throughout the day heavy rain was falling, but that didn’t stop us. In the afternoon we listened to contributions from the comrades of the National Assembly of Resistance, and Izquierda Socialista launched the new book edited by the Karl Marx Centre for Socialist Studies – They dared: 100 years since the October Revolution – which is a collection of writings from Lenin, Trotsky, Pierre Broue, Karl Liebknecht and John Reed, and which serves to deepen our understanding of the Russian Revolution.

At the end of the day we had a lively band playing which encouraged plenty of dancing, and there were several competitions for which the comrades formed teams, competed, and the winners received a bundle of Marxist books from the Centre for Socialist Studies. After a long day of political discussion and cultural activity, everyone had a well-deserved rest. 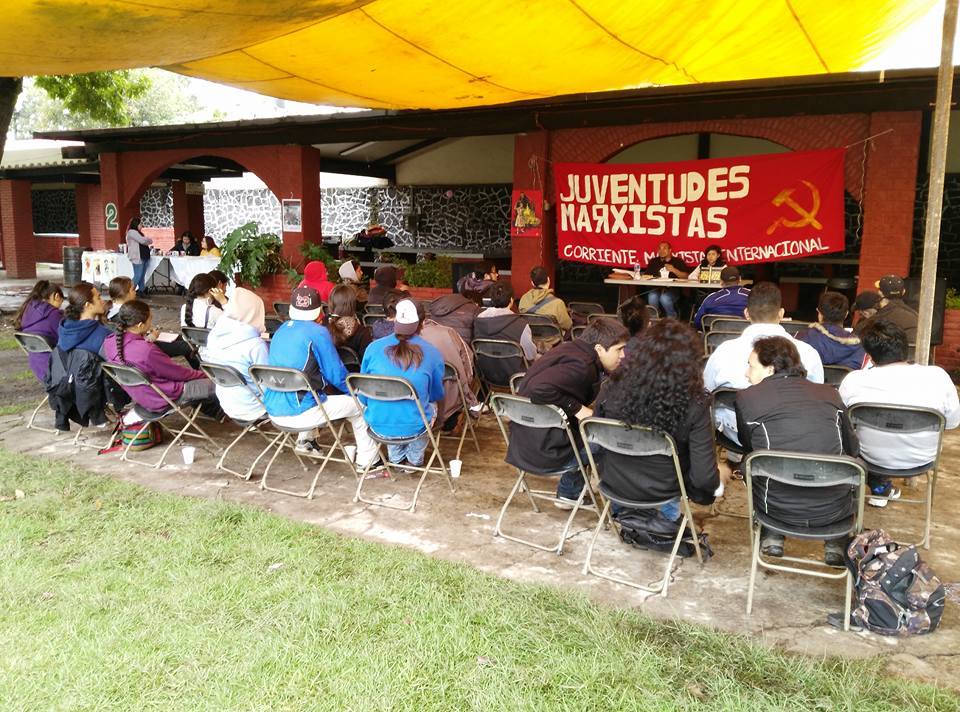 Sunday was used to discuss the perspectives for the international class struggle and the crisis of capitalism.

The topic was introduced by the other leader of the Mexican section of the International Marxist Tendency, Carlos Ricardo Márquez.

He explained that after the crisis of 2008 social upheaval has continued all over the world, he highlighted and discussed events like the Arab revolution; the Indignados movement in Spain; what is currently happening with the Bolivarian revolution and the government of Nicolas Maduro; Occupy Wall Street; and the rapid development of new political forces. The conclusion was that in one country after another the economic crisis has caused social polarization and an intensification of the class struggle on an international level. With this in mind, the forces of Marxism must be prepared so that we can offer a genuine alternative to young people and workers.

After this introduction, various comrades developed points about the class struggle in the USA and Mexico; the perspectives for the Venezuelan revolution; the rate of profit in the capitalist system, etc. The contributions enriched the discussion and developed the political perspectives of everyone there.

In spite of the attempted interference of the weather, the Marxist camp accomplished its purpose. More than three months of preparation went into the camp, and it resulted in a space for discussion and reflection. But above all it was an invitation to all the comrades to join Izquierda Socialista and Juventudes Marxistas in building the forces of Marxism in Mexico, so that it can become a part of the workers’ movement in Mexico, just like the Bolshevik party in Russia 100 years ago.

The task of political training for revolutionaries is urgent in the face of the current and future historical events.

The camp passed a resolution of solidarity (below) with the militant October 28 Popular Union of Street Sellers (UPVA), one of whose leaders was murdered in a cowardly fashion by the State in the city of Puebla. We offer our solidarity with the comrades with this resolution:

“The Commemorative camp of the centenary of the Russian Revolution, meeting in the sports centre Villa Coapa of the Mexican Electricians’ Union, expresses our solidarity with the 28 October UPVA and our condemnation of the cowardly assassination of comrade Meztli Sarabia. We demand justice, freedom for the imprisoned 28 October UPVA members, and an end to repression.

“This repression has inspired us to strengthen the struggle of workers against this rotten capitalist system, and for a democratic system without repression of workers, and without exploitation – that is to say socialism.”

At the closing of the camp the comrades sang the hymn of the oppressed and the working class all over the world: the Internationale.

Juventudes Marxistas and the International Marxist Tendency thank all the comrades who made the event possible, especially the comrades from the 25 February Democratic Schools Front, the comrades from Modern Times, the National Assembly of Resistance and the Movement for National Liberation. We hope that our exchange of ideas can continue, so that we can be united in the construction of a tool for the youth and workers to fight against the capitalist system.