Labour wards, branches and CLPs come out for Corbyn

Labour groups all over the country are coming out in defence of Jeremy Corbyn. See below for a selection of motions and statements that have been passed in the last few days. Using these and the model resolution below as a guide, activists should move resolutions in wards, branches and CLPs (Constituency Labour Parties) all over the country at the first available opportunity.

[Insert CLP / ward / branch] notes that with the Tories in crisis and a general election likely by the end of the year, now is one of the best opportunities we have for securing a Labour government.
We are dismayed and angered by the antics of a section of the Parliamentary Labour Party who have sought to undermine our democratically elected leader Jeremy Corbyn. We condemn the actions of the former members of the shadow cabinet, who instead of fighting the Tories have sought to undermine Labour by plunging the party into crisis.
172 MPs backed a motion of no confidence in Jeremy Corbyn. We express a complete lack of confidence in these MPs. They are completely out of touch with Labour Party members and supporters, nearly 60% of whom voted for Corbyn in September 2015.
We therefore resolve to fully support Jeremy Corbyn’s leadership of the Party, and condemn the actions of those MPs seeking to overturn his democratic mandate. We call for deselection of these MPs as representatives of the Labour Party in Parliament and call for them to be replaced by elected representatives who are willing to faithfully represent the democratic will of the Party membership and the interests of the working class.

Calder Valley CLP almost unanimous support for Jeremy Corbyn tonight in emergency resolution. Copies to NEC and Chair of PLP. One abstention 28 in favour no-one against. 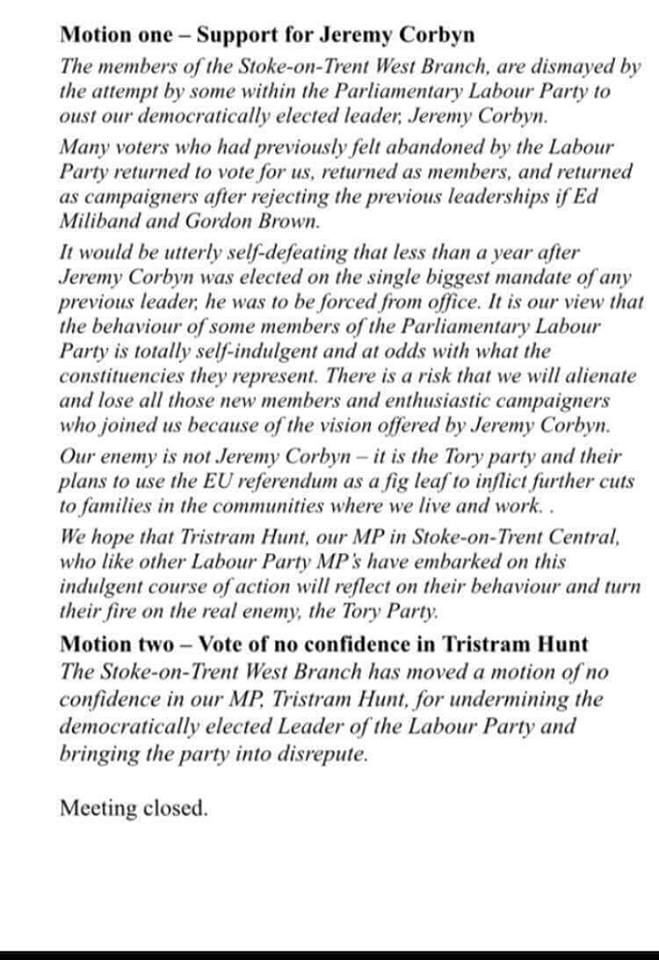 Blaydon CLP has voted with a 90% majority to support Corbyn.

Isle of Wight CLP voted 44 to 15 to support Jeremy Corbyn.

The following is a report from Guildford CLP:

Finally home from a great CLP meeting where we discussed the last week: a packed room of around 80 people, with a clear pro-Corbyn pro-socialist majority airing their anger and dismay about the PLP, to which I argued the response was deselection and socialism.

Also a clear feeling that we have lost our traditional working class base, but a disagreement on how to win it back: pandering to xenophobes, socialism, or just moving on were all suggested. From what I gathered, most seemed to agree the old, Blairite days are over

This is a statement from Islington North CLP:

As Labour Party members and supporters, we appeal to all members of the Parliamentary Labour Party (PLP) to reject the motion of no confidence in Jeremy Corbyn tabled by Margaret Hodge and Ann Coffey.

The country now faces critical questions about the future of our economy and society.  We believe that a leadership contest would be self-Indulgent, unnecessary and a waste of our party resources. It would also let the Tories off the hook at a time when they are bitterly split.

Any move by Labour MPs to oust Jeremy now would be showing contempt for the enormous democratic mandate he received from party members and supporters less than 12 months ago.

We call on all Labour MPs to reject the motion and unite behind Jeremy’s leadership.

A statement from Ceredigion CLP

The Executive Committee of Ceredigion CLP states its support for Jeremy Corbyn and reaffirms the mandate given by the membership to the elected leader of the Labour Party. We condemn attempts by members of the PLP to undermine the leadership by subverting the democratic process of the party. We call on all Labour Party members to abide by our democratic process and unite in order to resolve this crisis with all possible speed, so that we can continue to fight for the people of Britain at this time of political, economic and social crisis.

– Support Jeremy Corbyn’s continued leadership of the party
– Deplore the actions of Labour MPs who supported the vote of no confidence in Jeremy Corbyn and condemn the actions of those who are seeking to divide the party and overturn the leaders’ democratic mandate
– Request that the Party urgently develops credible and coherent policies that members can rally around and have resonance with voters to combat inequalities, injustices and the growing rise of xenophobia and racism

Grahame Morris, the Labour MP for Easington has confirmed his support for Corbyn in a letter to local members and explains how the Blairites are orchestrating the coup to force Jeremy Corbyn to resign as they are afraid he would win an open leadership election: 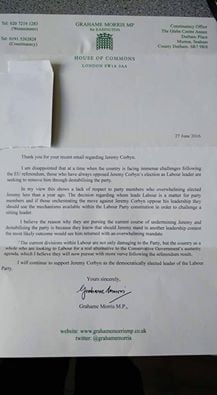 The following strongly-worded motion has passed through Tottenham CLP: 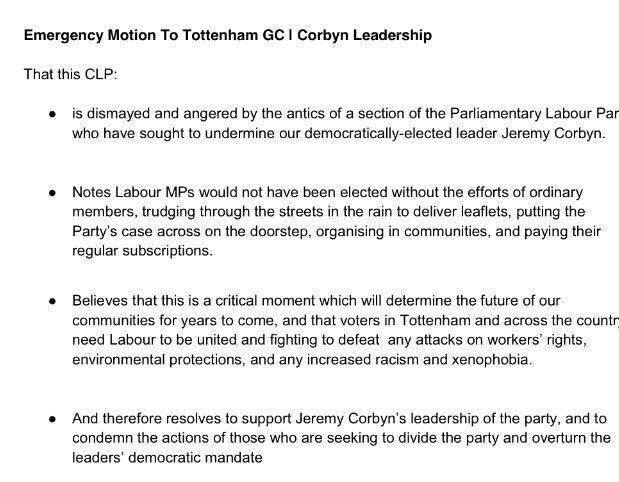